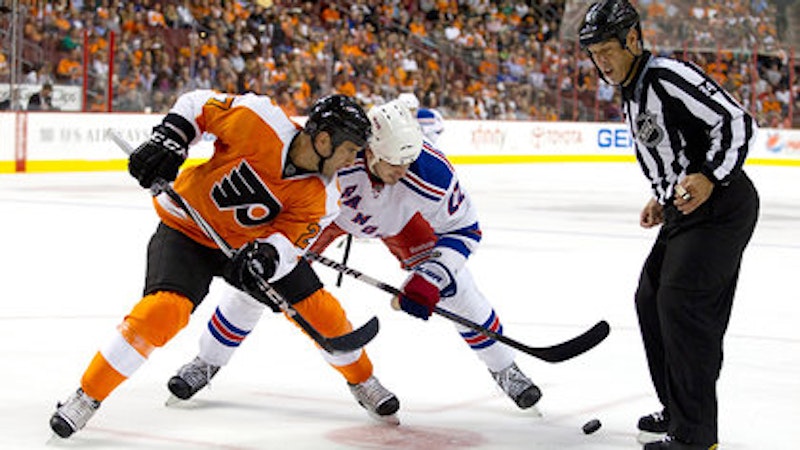 Apparently one way to fight the winter sports doldrums is a healthy dash of gimmickry, at least according to the NHL.

After late January “stadium series” match-ups riffing on the outdoor mystique of the Winter Classic (now a New Year’s tradition) the NHL folds up its tent for almost all of February as Olympic hockey from Sochi, Russia, takes over the airwaves. The problem with Olympic hockey is that it’s so good it’s hard to return to the NHL product after watching the big event with all the medals. The live hockey experience at the Garden, especially down close in the first 20 rows or so, is hard to beat. It is like watching human NASCAR, given the size, speed and colorful uniforms worn by the skating players. To put rinks in the middle of the Yankee Stadium outfield or the Dodger Stadium foul territory or even Soldier Field tends to distance the live fans from the game they so love.

The outdoor stadium games bring an NFL angle to the experience, meaning it’s better watched in the comfort of indoors on a high-definition television. The brilliant use of the cablecam in this year’s Winter Classic in Ann Arbor was mesmerizing and kept me watching just to catch another overhead peek at Detroit’s Pavel Datsyuk as he fools three defenders just by putting a single arm akimbo as he carries the puck into the zone.

The Rangers will play the Devils and Islanders in the Bronx the week before the Super Bowl comes to New Jersey. Stub Hub at last viewing had 5005 seats available for the Rangers-Devils Jan. 26 Yankee Stadium tilt, ranging in price from $146 in the nosebleeds to $627 for the “Legend Suites” seats nobody sits in down close at Yankees games. As for the L.A. Kings vs Anaheim Ducks games in Dodger Stadium, good luck getting Southern California interested in any attention span challenge such as a full three-period hockey game. In Chicago, the Blackhawks will play the Penguins on March 1 and by then the Cubs will still be alive because Spring Training will be underway.

But if you think baseball is exempt from the gimmickry, not this year. MLB is holding the opening series in Sydney, Australia—shipping the Dodgers and Diamondbacks across the globe to play two games that count during the third week of March, while every other team is making roster cuts and getting sunburned on the golf course.

The NBA, meanwhile, stays the course of normalcy, playing its All-Star Game in New Orleans right in the middle of the winter Olympics. Just this week it looked like the Dolan Doghouse was about to be emptied. The Knicks had won four in a row, the Rangers three. Both streaks ended Tuesday night. I did not watch the Knicks, of course, but the Rangers game was a fairly spectacular battle against the Tampa Bay Lightning. It still strikes me as odd when Tampa insists on adding “Bay” to its sports franchises. Just Tampa will do, thank you, as micro-regionalism is not necessary when it comes to west Florida’s traffic-choked sprawl.

The Lightning prevailed 2-1 thanks to their gargantuan goalkeeper Ben Bishop, who stands six foot seven without his skates. Bishop fills the entire frame of the goal when he crouches down, and had it not been for some recent injuries, the 27-year-old Denver native probably should’ve gotten the call to be a U.S. netminder for the Olympic team in Sochi. He improved to 5-0 against the Rangers, who looked so good in their previous game humiliating the Flyers at the Garden. Paying attention to the MSG2 broadcast found errors all around. The overworked Al Trautwig, a sideline reporter stalwart, referred to his desk partner Ron Duguay as Ron Greschner. In the post-game interviews, Rangers captain Ryan Callahan, one of seven Blueshirts headed to Russia for the Olympics, did his best Derek Jeter version of terse answers followed by head-scratching, and then kept saying they’d have to prepare for the next game in Detroit. Well, Detroit will not be in Detroit. The Red Wings are coming to the Garden Thursday night to play the Rangers. For the casual viewer or first-time reader, I am demonstrating the exact type of hairsplitting pedantry that creeps into a fan’s psyche during the deepest winter withdrawals from baseball. These are the pink elephants in the corner when I would give my right arm just to see a routine 6-3 put-out live from any ballpark. I apologize to Trautwig and Callahan and for all others who suffer unnecessary exposure to these minutiae.

It also doesn’t help matters that every other sports schedule seems to be interrupted by these medicine show types of deals. Interleague play in MLB should’ve came and went by now, but we are saddled with it forever. Outdoor rinks, outdoor basketball, maybe even an NFL game on the International Space Station? Nothing can be ruled out, and that can be quite distracting.