A Brief History of the English Premier League

The Club isn't primer for new or potential fans, but does give a sense of what the League’s about. 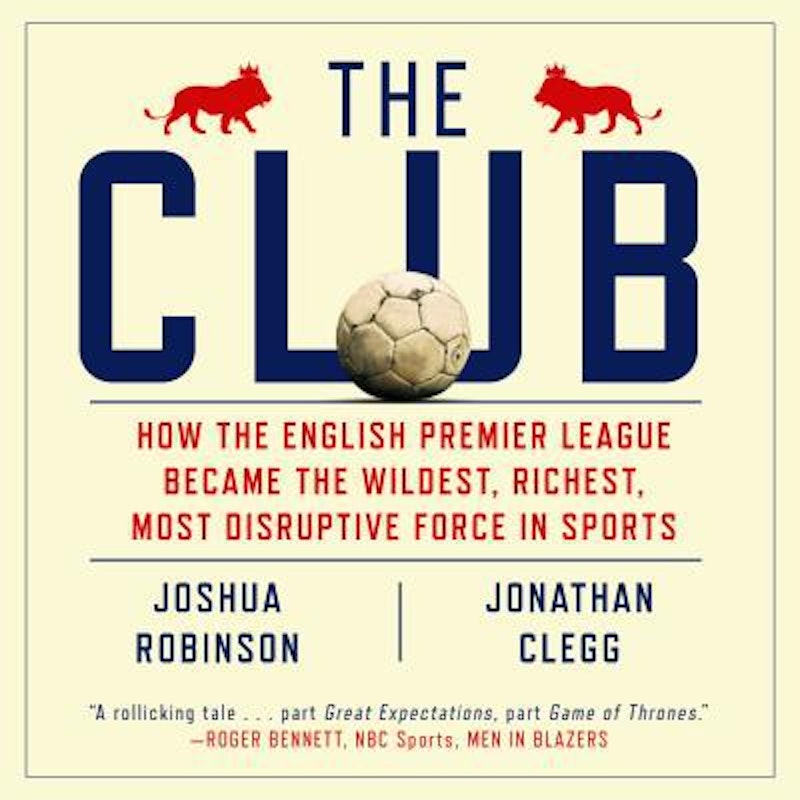 Growing up as a North American sports fan in the 1980s, soccer baffled me. Major North American team sports had similar league structures, similar rules around player acquisition, even similar team hierarchies—players guided by a coach who answered to a General Manager. Soccer was different. Managers coached, but also scouted new players, which they didn’t draft or trade for but acquired by paying a transfer fee. The sport didn’t even have a single major league that was home to the majority of the best players.

Over the last couple of decades, though, the English Premier League’s become a larger part of the North American sporting conversation. I’d wondered whether it was worth picking a rooting interest and trying to follow the game. Which brought me to The Club, a book by journalists Joshua Robinson and Jonathan Clegg.

It’s a history of the English Premier League from its formation in 1992, more a history of the economics and behind-the-scenes tensions in the League. It’s not a primer for new or potential fans, but does give a sense of what the League’s about.

The story the book tells is clear enough. It begins with English football in a parlous state in the 1980s, when going to a match was a hairy adventure—and going to the washrooms in a stadium the next thing to a suicide mission. A small group of young owners decided to change things, upgrading the facilities and ultimately creating a new league when the existing structure couldn’t accommodate their vision. Thus the Premier League, a major step in the change of a lad sporting culture to something more corporate and TV-friendly.

That’s a standard enough tale, and Robinson and Clegg present it clearly and quickly. They give both sides of the equation, too, and a recurring theme in the book is the relation of existing fans to the modernizing approaches of their teams’ management; some squads date back to the 19th century, with supporters who’ve inherited their passion from generations before them. Those fans are acutely sensitive to the possibility of being priced out, seeing teams orient themselves more to international TV audiences than to local supporters, and seeing the character of a local institution being changed by owners who aren’t a part of the community.

They’re sensitive to what it means to have their team become an element in a foreign billionaire’s portfolio. Clegg and Robinson don’t stop with the transformation the Premier League brought in the 1990s, but follow the English sport’s evolution through the current century. Notably, they describe waves of owners putting increasing amounts of money into the League. First, British owners and businessmen. Then, as the sport became more popular, Russian oligarchs and Middle Eastern oil tycoons. And then soon after that Americans looking to buy into British traditions and get a piece of a major sport.

The structure of the book’s not strictly chronological, and occasionally leans toward the anecdotal. Sometimes, particularly in the latter half, one loses a sense of the League’s development as a whole. The overall drift’s clear, though, and the prose is solid. It’s good sportswriting; informal, chatty, an atmosphere of wit more than actual cleverness—though lines like one about the tabloids’ “gossip-industrial complex” land well.

An intriguing portrait of the British way of football emerges, as does a portrait of hapless Americans trying to buy their way into sport and often suffering psychological damage as a result. Rich men, consciously or unconsciously believing that money can buy anything and solve any problem, found themselves at a loss dealing with fractious supporters. It turns out that generations of tradition can’t be bought so easily.

The business structure of the Premier League, too, is much wilder than the almost socialist approach of North American sports leagues, with their franchises subordinate to a central league office, and detailed rules about player movement and payrolls. Players and agents have more say in Premier League soccer. American owners struggled to cope: “The intensity, the chaos,” one recalled, “it either smokes some truth out of you, or you turn into one of them.” There’s a note of shell shock in the quote, a kind of trauma at a resolutely English phenomenon that resists wealthy men who think they know what’s best.

In fact, Clegg and Robinson write that Premier League results correlate strongly with payroll size. Success is buyable, and indeed perhaps must be bought. Six teams are dominant, and if that’s more than in other European soccer leagues there’s still a clear class structure in the Premier League. The book’s a testament to how results on the field follow from decisions made in the boardroom. And it makes clear how the rich, those top six clubs, chafe under a revenue structure that divides TV money evenly among 20 teams instead of paying off the teams that drive ratings.

The Club is also smart enough not to proclaim itself the end of history. It’s a book about a League that’s been in a state of constant change for over two and a half decades. And it ends with a sense that change is still ongoing: the League’s seeing a decline in terms of its results in the Champions League, when its top teams play European sides from various continental leagues; American television involvement is still increasing; there’s talk of trying to put together a true pan-European league, with top teams from across the continent including the big six of the Premier League.

The book’s a solid introduction to the Premier League, with a good sense of character; the character of owners and managers and players, but more importantly, the character of the most important teams and their fans. I don’t know whether it reveals anything drastically new to people who’ve followed the sport closely for years, but I have a reasonable grasp now of the state and recent history of big-league English soccer.