GM Ben Cherington has a lot of work to do this offseason. 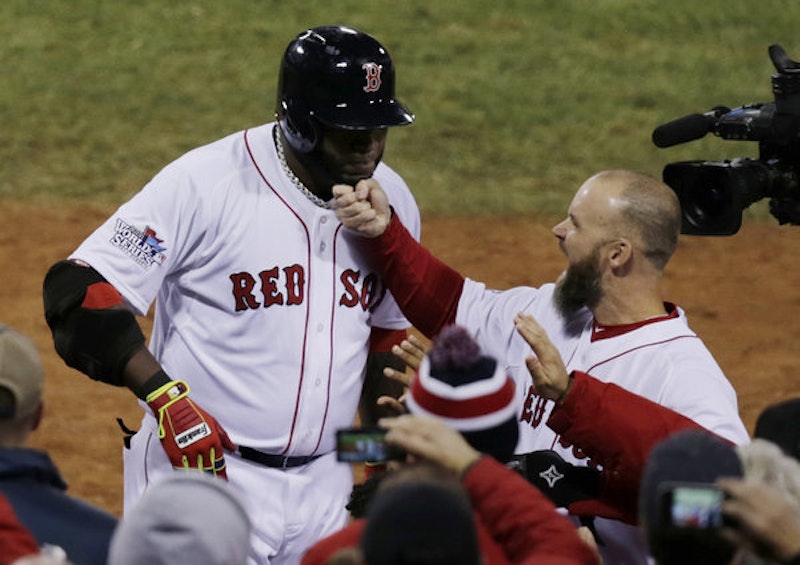 It’s still sinking in that the Red Sox won the World Series. Back in March, I figured the Sox could win around 88 games, with a slim chance at making the playoffs. This team wasn’t the fine-tuned machine of 2007; it was messy, one of the reasons they were fun to watch. On that note, l hope the Red Sox don’t take the Brian Sabean approach this offseason. San Francisco has won two out of the last three World Series, and after each one GM Sabean made few changes. After the 2010 championship, Sabean inked Aubrey Huff to a two-year/$22 million deal and didn’t do much else. After the 2012 championship, he re-signed Angel Pagan and Marco Scutaro to hefty contracts, along with extending Matt Cain and Buster Posey to even bigger ones, and didn’t do much else. The Giants failed to make the postseason in both those seasons.

The moral: the same players usually can’t get you to the playoffs twice. Boston GM Ben Cherington needs to take heed. I loved the 2013 Red Sox. They were goofy, crazy, passionate, talented and energetic. Also incredibly lucky. The team managed to get All-Star performances from players who were previously considered average regulars. Some people think Jarrod Saltalamacchia has finally broken out. I’d say he just had a career year. Will Mike Napoli perform as well when he’s not motivated by impending free agency? The numbers suggest he won’t. What about Koji Uehara? Will he be the best reliever in baseball next year? Not likely. Shane Victorino? His body will not hold up. I imagine the Sox will get solid production out of him when he’s healthy, but that won’t be too often.

The point is: Cherington needs to make a new team. Fielding the same team next year would be a mistake. Cherington knows that, though. He’ll have few qualms letting Jacoby Ellsbury leave via free agency. After all, Red Sox fans have always known their center fielder, represented by Scott Boras, would bolt after his minimum six years were up. Besides, Jackie Bradley Jr. is ready for fulltime action. Letting Ellsbury go is obvious. I’m worried, however, that Cherington will be tempted to retain Saltalamacchia and Napoli.

Not that you’d know it by watching any games this year, but the Sox have a high upside offensive catcher already in the system. Ryan Lavarnway is more than capable of filling Salty’s absence. He’s destroyed AAA pitching in the past and showed major league promise at the plate in 2013. With regular playing time, Lavarnway could be a well above average offensive catcher. In fact, his offensive ability has never been called into question. His defense is what scouts sneer at. Those issues have been addressed, however, and while he won’t ever be on Yadier Molina’s level, he’s not atrocious behind the dish. Even if handing Lavarnway the everyday job is a risk, it’s a risk worth taking, especially when the alternative is handing Salty a long-term contract, possibly in excess of four years.

The first base situation will require a bit more creativity. Re-signing Napoli shouldn’t even be considered. A torrid September/October does not make up for his putrid summer. In July, he struck out nearly 40 percent of the time. That number will only get worse with age. Signing Napoli to a one-year deal was perfect last offseason because it gave him incentive to perform. Impending free agency always gives players incentive to perform. His 3.9 fWAR was well worth the $13 million investment. But without something to prove, Napoli, no youngster, will regress both on offense and defense.

Jose Dariel Abreu was the perfect answer to the Sox’s first base vacancy, but he’s with the White Sox now, so there’s no use crying over what could have been. The options on the free agent market are far less permanent. Corey Hart, Michael Morse, and Kevin Youkilis are all free agent first basemen who are coming off injury-plagued seasons—Hart didn’t play at all in 2013—and will only require one-year commitments. Staying healthy is the key for those three. If they avoid the DL, they could all be highly productive members of any team.

The trade market is a better option, though. The Royals have recently expressed their willingness to trade 1B/DH Billy Butler, who had a down season at the plate in 2013. Butler, although not gifted defensively, would hit phenomenally at Fenway. The Royals would definitely be interested in some of the Red Sox’s young pitchers. Perhaps Cherington would consider trading lefty Felix Doubront? Additionally, the Cardinals have a logjam at first. Both Allen Craig and Matt Adams are viable starters, but would be defensive liabilities anywhere besides first base. St. Louis GM John Mozeliak would be more inclined to trade Adams, as Craig was recently inked to an affordable long-term deal.

Cherington could be craftier, though. He could look to the Moneyball mold of finding a player you want in your lineup and forcing him to play first base. Carlos Beltran will likely be looking for a two-year commitment from an American League team that will allow him to DH on occasion. The onetime great fielder is now plagued by a lack of mobility and range. That doesn’t mean he can’t hit, evidenced by his 22.4 offensive runs, per Fangraphs. Enough money could convince Beltran to helm first base for the Sox. Converting an aging outfielder to first base is not unprecedented. Red Sox great Carl Yastrzemski, for example, manned first in the later part of his career.

In order for the Red Sox to remain competitive in the toughest division in baseball, Cherington needs to inject some novelty into his club. He cannot field the same team he did in 2014. Like Sabean has proven (twice!), every team gets stale.