We Watched in Ignored Horror

A justified silence for the 25th anniversary of Major League Soccer. 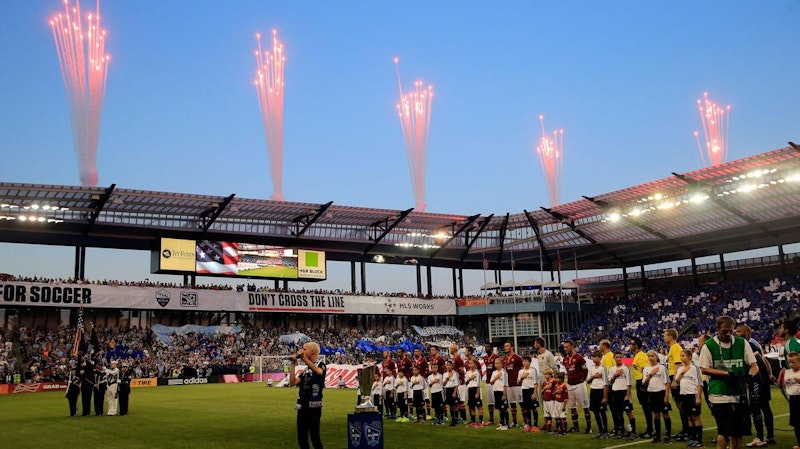 It’s somehow appropriate that Major League Soccer “celebrates” its 25th anniversary this week as the entire sports world is shut down. Lord knows when the league started back in April of 1996, the launch made about as much noise as the Goodyear blimp landing back at the Wingfoot Lake hangar in Mogadore, Ohio, after an unspectacular buzzing of the Browns-Steelers game at Municipal Stadium at Cleveland in September of 1994. In other words, the MLS launch in the land of sports marketing Hindenburg’s translated to more of an “Oh, by the way, the humanity,” in terms of the famous Herbert Morrison notorious radio play-by-play of the zeppelin crash in Jersey back in May of 1937. Maybe ESPN2 will carry it live? What? Me Worry? Pro soccer in the United States?

As I’d documented in New York Press back in 2005, I arrived at the birth of New York/New Jersey’s MLS action on Hitler’s Birthday, April 20, 1996 after having tried to attend the New York Mets rain-delayed game against Colorado at Shea Stadium in Queens. On the way to Giants Stadium, where the MetroStars were to debut, I stopped to kill some time in Times Square to check out the opening of the Jennifer Lopez vehicle Anaconda. For the record, I’ve been a fan of hers ever since, and would become a staunch MetroStars supporter and MLS advocate for years to follow. Why wouldn’t I, having crossed the East River, the Hudson River and the Passaic River in one day in April of 1996 to see the replacement of the New York Cosmos take their stand in the local pro sports scene?

We watched in ignored horror as a “shoot out clock” was used to prevent draws in the land where winners and losers were the thing. Despite all the fan suffering, who are guys like Doctor Khamalo or Lothar Matthaus or Roberto Donadoni to complain or advocate for athletic justice in this case? They were international stars cashing final paychecks in a jokey summer league in the states. What is to lose? Who really is watching? The league barely made a dent in local sports pages. It became sort of a professional soccer Twilight Zone in the early years of the league with only a few corporate mega-owners dispatched over the 10 squads making up the original MLS.

Now it’s on the way to become an unruly 30-team Mega-City One without a Judge Dredd to dispatch justice. We have watched in horror as the league has been allowed to co-opt embarrassing European style names for the franchises, leaning far away from the old original days of the “Kansas City Wiz” based on the Wizard of Oz concept. No, now we have renamed “Sporting Kansas City” like we’re in Spain or somewhere. There is actually a Real Salt Lake. Seriously. And as fans we’re supposed to choke this down without protest, as if we’ve never watched in horror as Preki wore that hideous Wiz kit and made his noise as only he could back in 1996 with his paycheck signed by a guy who also owned two other teams in the league.

Eric Wynalda was a San Jose Clash before they became Earthquakes. Alexi Lalas used to roam Hoboken’s bars as a member of Foxboro’s soccer entity the New England Revolution. How wrong is that? (Lalas did serve one season in a MetroStars kit in 1998, so perhaps it was during that stint? I can’t remember the specifics of the late 90s, so we must give the Donkey a pass.)

When I say “we’ watched in ignored horror, who do I mean? The Empire Supporters Club. The somehow official supporters club of Metros football put together by a few stray New York Centaurs fans. The Centaurs, who also went by New York Fever for a spell, played A-league soccer in the pile of concrete called Downing Stadium on Randall’s Island. The ESC was a great mix of Anglophile soccer geeks, mods and everyone you might see at local ska concerts. There was a fire department lawyer “in charge,” lots of beer spilled in the Giants Stadium parking lot as ESC membership began to swell as the MetroStars slowly improved. Saturdays in summer became a soccer purgatory in The Swamp. Our local ESC gaggle in North Brooklyn would start the beers in late morning, shopping a few delis in Greenpoint for sausages, hit the Sweetwater Tavern for more pregame, sit in Manhattan tunnel traffic by mid-afternoon trying to get to “the ground.”

The group’s logo was a cigar-chomping skunk in boots and braces wearing a flatcap. The skunk tail contained the same graphic that marred the original MetroStars jerseys in 1996—a kind of white miasma stripe that could have been a lightning bolt but not really. My 2003 ESC membership card I still carry is numbered “057.” For any of the roughly 8,000 people inside Giants Stadium for MLS action, the ESC was the group standing, chanting and throwing confetti behind the goal in section 101, surrounded by the usual sea of empty red seats.
So the ESC assemblies in East Rutherford watched in ignored horror as the MetroStars suddenly became Red Bull New York (March of 2006) and our White Elephant NFL Stadium was soon abandoned for Euro-style digs just off the PATH train in Harrison, New Jersey.

It was a great problem solved, I must say, but, hypocritically, I have never been to a game at the new digs for our local MLS side. And somehow that seems right. The Red Bull rebranding transition kind of broke up the original core of the ESC. I figured because we watched for so long in ignored horror that I earned a voucher to avoid the appropriate venue in place for pro soccer in the New York City metropolitan area. For the record, MLS insisted on another New York City franchise which is currently kind of homeless, so New York City FC supporters (“fans” in American sports lingo), welcome to watching in ignored horror. Your team is affiliated with one of the giants of the English Premier League, yet you can barely find a place to play home games within the shadow of the NYC skyline. Somehow sounds familiar to MetroStars supporters who endured Giants Stadium through the early years.

Through it all, the New York Cosmos still linger on Long Island in search of a lower-level league niche, with a wealthy Italian owner preserving the brand as only he can during this incredibly trying time.

For me personally, I now watch in ignored horror as the local National Premier Soccer League side Kingston Stockade FC has had their 2020 season cancelled by the league, which silences my online color analyst gig for the team on MyCujoo as well as shuts down the publishing of my matchday fanzine The Fence Post covering the squad on the underground. Oh well, NBD, as the kids say.
Almost in spite of itself, the only pro soccer league that does not have promotion or relegation has made it to the quarter-century mark. With everyone now standing in their personal six-yard box, pass the grocery store birthday cake and dig in.