Hail Mary, full of grace for a soccer goodbye. 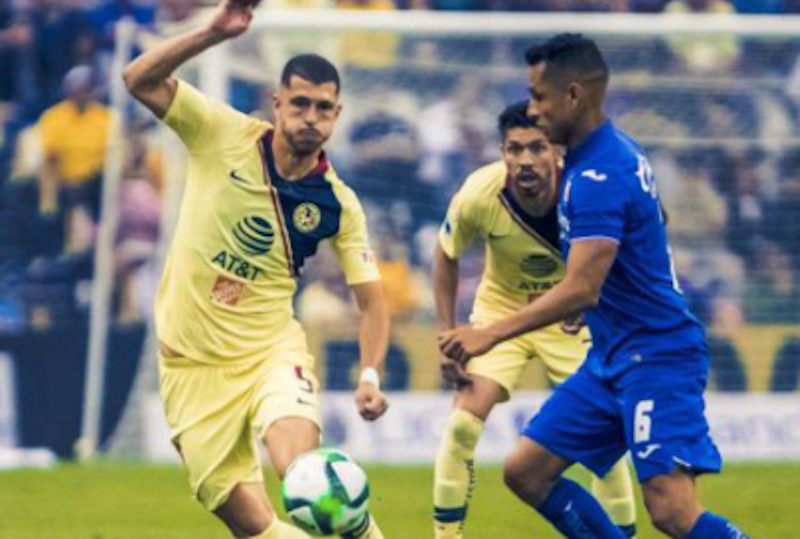 It was the final live soccer broadcast from this hemisphere, and I was a sports Omega Man in my secluded lair. It was late on a Sunday night; the top Mexican league was the last to surrender all action and down tools due to coronavirus concerns. It was what should have been a cracking Mexico City derby as America hosted Cruz Azul at the gargantuan Estadio Azteca Stadium. The teams, who share the facility as their home ground, were battling at the top of the Liga MX table.

I had the TV turned way down so as not to disturb those sleeping elsewhere in the house. I summoned my 15-year-old daughter, an excellent attacking midfielder in her own right, to foil my Omega Man experience. I kept waiting for the stone-faced officials to wave off the players as they entered one of the most daunting soccer venues on the planet. No fans were permitted, so the 90,000 or so seats were empty, with the top deck seats painted with the beer sponsor’s massive logo. As players walked on, some touched the turf, then crossed themselves and looked heavenward. But what they saw was the upper deck painted with the Corona beer insignia in its ironic Old London font.

The game was on in an ancient land between two ancient sides (America founded 1916, Cruz Azul founded 1927). As they took their positions among the echoes and under the lights some 7200 feet above sea level, it started to hail. Of course it did.

The cameras of broadcaster TUDN got a shot of Oberlin Pineda, a midfielder for Cruz Azul, as he made the mistake of looking up and was blasted in the eye with falling ice. TUDN then cut to close-ups of the grass with the ice pellets bouncing around. In the worldwide storm of cancellations and postponements, would it be old-fashioned weather that would call off this game? For a moment, the possibility loomed. The language barrier between myself and the Spanish announcers added to the other-worldly scene. Soon enough, Matchday 10 of 17 was underway and each kick of the ball echoed like timpani strikes. The grunting of the players could be heard, as could the persistent cat-whistling of a stray winger requesting the ball at an impossible angle.

Mexican soccer gets me through a long winter. The garish colors of the uniforms and the glaring sunshine on the TV at the local Mexican restaurant smuggles in some type of summertime languor that does the trick at least until MLB Spring Training starts. The routine is enjoyable: the owner of the Mexican café sees me come in and he glances around at the bar and notices no one paying attention to some oddball college basketball game on his TV and click, he turns it to Pumas vs Tigres or Pachuca hosting Leon. Soon, busboys and line cooks find reasons for quick errands to do in the front of the house, necks craning around corners to check the score. Plates are very slowly scraped over the garbage bins at the end of the bar, a no-look gesture as the gaze is upward at the vast expanse of green on the giant television. The breathless and staccato TUDN announcers have a way of elevating the game’s excitement, even during a mundane throw-in. By mid-winter, I pretty much knew which employee supported which Mexican club and would use that knowledge to have more fun than usual our local Mexican café.

That’s all over now.

It seems appropriate the final match was played in Mexico’s largest stadium. I’ve always wanted to attend a match there, perhaps because when I was very young my father used to take business trips to Mexico City and his descriptions of the landscape and architecture never failed to fascinate. As I write this there had been plans for my family to drive to Ohio to help celebrate my mother’s 90th birthday in person. Instead, we settle for a Zoom phone conference connecting relatives on both coasts to the family matron ensconced at my sister’s home in Central Ohio. I occasionally have to remind mom that she has Pirates fan supremacy having been to games at Forbes Field, Three Rivers Stadium and PNC Park within her lifetime. She also lived through the rise and fall of polio. I turn 56 on April 9 and will no doubt receive mostly online greetings and hope I’ll have resumed springtime rites of hitting a tennis ball against the wooden wall at the local rec park, which qualifies as solitary sport. In my lifetime my Pittsburgh Pirates are 12-22 when playing on my birthday, so I’ll probably be spared the usual candle-blowing disappointment.

Now the Sundays are occupied with sportswriters and “content providers” struggling with existential ranking of “what is important.” Soccer writer Rory Smith pretty much nailed it all in the March 22 New York Times sports section. His piece “Sports May Not Matter, but It’s Important” was buried in an already threadbare section touting the rise of running as the solitary sport of choice. Smith started with his trip to visit the groundskeeper at the failed English club at Bury. The ground’s bar manager then reminded him that people’s habits change, and that might be the long-term damage to the sport. Smith then recounted the routines and rituals of true fans who quietly go about their obsessions. Sports as Industries. Sports as Economies. An ominous subhead asks “So, What Now?”

Smith gladly confesses he’ll continue his wandering column that has been excellent for as long as he has been writing it. Oddly enough, my Internet feed dropped in a live broadcast of CBS Sports Network that afternoon and their soccer coverage included horrible live reports from a reporter on a balcony in Italy. Then the host asked announcer Thomas Rongen, a veteran Dutch/American coach and scout, how he was dealing with no soccer, and he delivered a post-coronavirus soliloquy almost identical to Smith’s column in the Times.

Back to the final game in Mexico. It went 99 minutes thanks to stoppage time. Cruz Azul won 1-0 but only after America had a penalty shot saved in the 98th minute. And the name of the 39-year-old Cruz Azul keeper who made the historic save that pushed his team to the top of the table and the Liga MX season into the abyss? Jose de Jesus Corona.