The opposite of Jerry Tarkanian’s 1990 UNLV championship team. 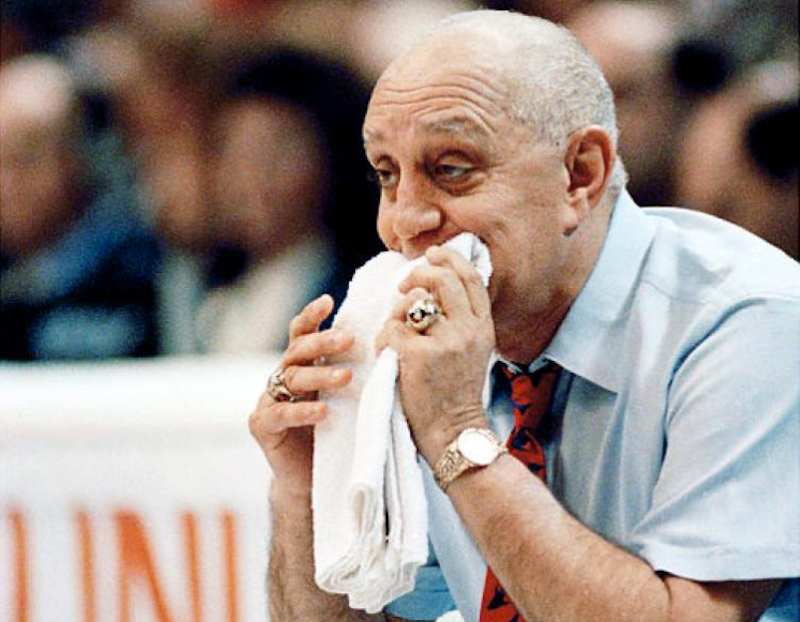 I’m cursed by becoming attached to boring, “lunch pail” basketball teams. As a youth, my dad took me down to Manhattan for my first Knicks game. My initial foray into the intoxicating atmosphere of Manhattan combined with my first NBA game made for a heady experience. Little did I know that this meant I'd end up watching countless plodding Knicks games throughout the 1990s coached by either Pat Riley or Jeff Van Gundy. Riley, with his chiseled looks and Armani suits, cut a slick figure, while Van Gundy resembled an IRS agent with a perpetual five o’clock shadow, but both ended up producing basketball that was about as aesthetically appealing as the taxman.

After moving to Charlottesville, Virginia in 2006 I climbed aboard the “Hoos” (short for Wahoos) bandwagon. It's great to now have a team that's actually given at least a shot at the national championship, but then again I'm back to watching the sort of games Riley and Van Gundy regularly coached. Such games practice the philosophy that while perimeter shots may not fall in any given game, defense suffers from no such limitation. The belief is that an effective defensive plan coupled with maximum effort produces the most reliable result. The Cavs are disparaged for playing “ugly ball” under their successful current coach, Tony Bennett, and critics have a valid point. Eating up the shot clock by passing the ball around until the best shot presents itself isn't inspiring to watch. I've seen a number of UVA games when neither team scores 30 points in the first half. The beauty of the game manifests itself only when the offense reigns supreme and players are allowed to express themselves and improvise on the court.

The Cavaliers, like the earlier Knicks, offer no such ethereal delights for connoisseurs of the game’s subtler pleasures. Born in New York State, the Knicks were always my destiny, for better or for worse. If only I’d had the chance to bypass Charlottesville with a time-travel relocation to Las Vegas, making me witness as a fan in 1990 to the University of Nevada, Las Vegas Runnin’ Rebels capturing the national title with a record-setting 103-73 drubbing of Mike Krzyzewski’s Duke Blue Devils. No Division I championship team had ever won in the finals by such a margin of victory.

Vegas is the anti-Charlottesville. It's tacky and exciting, while Jeffersonian Charlottesville is snooty and academic. Rogue, towel-munching UNLV coach Jerry Tarkanian was the anti-Tony Bennett, a well-coiffed and blandly handsome guy who'd be at home calculating hurdle rates and developing corporate strategy for IBM. The comparison holds for the schools as well. UNLV was a nothing school with no basketball or academic reputation when Tarkanian arrived, while UVA has always churned out captains of industry.

Tarkanian was known as “Tark the Shark.” Bennett’s nickname is Tony. Tarkanian took on the NCAA for years, exposing them for the hypocritical approach of persecuting him for the same misdeeds established programs routinely got away with. The Shark’s teams played with a go-for-broke mindset that's foreign to Bennett’s corporate approach. Even his so-called “amoeba” defense was thrilling, focusing as it did on a risk-embracing aggression aimed at producing fast breaks. That defense then became the engine for UNLV’s offense, making the team fun to watch on both ends of the floor. UVA’s current defense is more of a lockdown effort aimed at slowly smothering opponents, dull, but methodically effective.

Last season, UVA knocked on the door of a Final Four NCAA championship appearance, but Syracuse beat them and went to Houston instead. Bennett's defense-oriented game may not be designed to win championships. The brash, rough-around-the-edges Tarkanian is the sort of guy Charlottesville looks down on, but he took risks and won the big one. Tarkanian was up front about his imperfections. UVA presents a veneer of genteel respectability while charging its corporate-style administrators with enabling unspeakable debauchery in its frat houses every weekend. The warts remain well-hidden. Next year's freshman class is the number one priority, and disturbing news scares parents off.

The Cavs may win a national championship under Bennett. Perhaps his careful approach will one day pay off, like the prudent person who saves his money for retirement. But they'll never come close to doing it in the riveting fashion of Tark and his Runnin’ Rebels. If they somehow manage to pull it off, it’ll be by something like a buzzer-beater at the clock. I'll just have to settle for what I can get at this point. That's what being a fan’s all about.