LeBron Is the King of Thin Skin 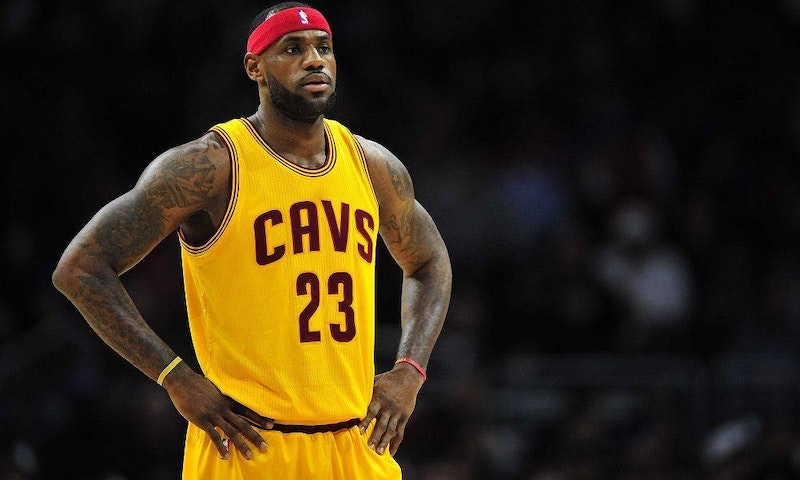 LeBron James secured his crowning athletic achievement just eight months ago when he won the NBA Championship with his hometown Cleveland Cavaliers. The victory was Cleveland’s first major sports championship in half a century. James and the Cavs have every reason to still be riding high as the favorites in the NBA’s Eastern Conference. Instead, James has become a daily headline-grabber whining about Phil Jackson’s word choice, Charles Barkley’s image and the makeup of his own roster.

James took issue with Jackson’s use of the innocuous “posse” in reference to business associates earlier this season. He was offended by the term despite the fact that everyone from Kim Kardashian to those Duck Dynasty idiots can lay claim to a posse these days. When Barkley called James out last week for whining and complaining about the makeup of the most expensive team in NBA history James responded with a well-crafted and tone-deaf personal attack. Barkley was never a role model but he’s a beloved NBA figure. James would be best served by not attacking analysts for analyzing.

James drew criticism from fans and NBA lifers when he left Cleveland for Miami. The common theme was that he was running from competition and creating a super team. He left Miami after two championships largely because he wanted more say in how Pat Riley ran the franchise. James also wanted Heat owner Micky Arison to run up a large luxury tax bill to bring in the talent needed to fuel additional runs to the NBA Finals. James pulled the same act on Miami, bolting at the first sign of adversity to build a new super team with the Cavs.

The sports adage of “Players play, coaches coach” hasn’t applied to James since his return to Cleveland. He used Cavaliers’ owner Dan Gilbert’s ridiculous 2010 letter as leverage to grab more power in the makeup of the roster upon his return to Cleveland. James has used that power as a hammer since his return securing max contracts for himself, Kyrie Irving and Kevin Love, along with lucrative long-term deals for teammates Tristan Thompson and J.R. Smith. James also chased out Cleveland coach David Blatt last season. The investment in Team LeBron gave the Cavs their first championship. The monster is turning on its creator.

Now that Golden State has one-upped Cleveland in the super team ranks with the addition of Kevin Durant, the NBA’s reigning King is crying foul. James may just be attempting to light a fire under his front office to make roster upgrades but it comes off as whining. There’s no roster move that Cleveland can make during the season that would top the Durant signing. Rather than face the challenge of the Warriors head-on, James once again sounds like he wants to run from competition. James either needs a new message or a new method of delivery.

The simplest explanation for what ails James and the Cavs is plain old boredom. Cleveland had a losing record in the month of January and still holds a 2.5 game lead over the Celtics for the top spot in the East. James should stop complaining for a few days and spend his time focusing the roster he helped create on the task of repeating as Champions. The other issue facing the Cavs is that the team, at James’ urging, has committed more than $320 million in long-term contracts to the power forward position. The guaranteed salaries of James, Kevin Love, Tristan Thompson and Channing Frye have left the Cavs top heavy with front-court players. When James cries about the team lacking a playmaker the front office should remind him that he’s been guaranteed nearly $100 million to make plays.