Serena's not even the greatest female tennis player of all time. 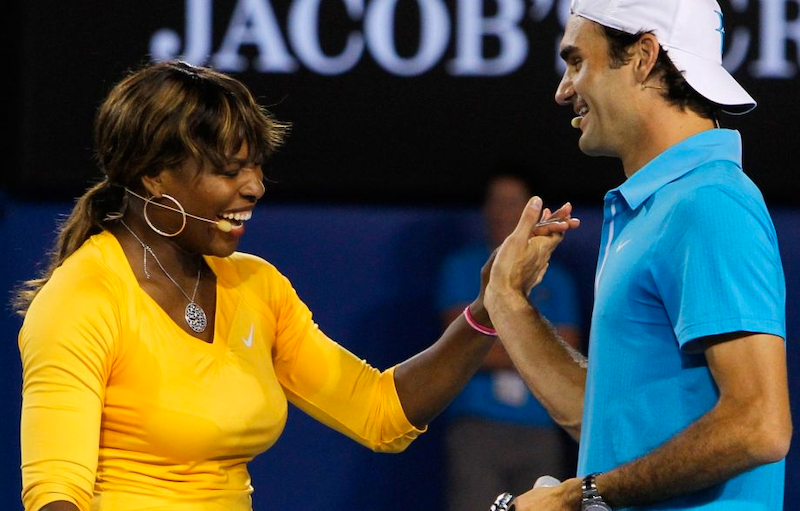 Serena Williams is a great tennis player. The powerful 35-year-old from Compton, California may even be the greatest woman player ever by the time she puts her racquet down. In a spectacular 20-year career, Serena’s won 85 percent of her 913 singles matches on the way to bagging 23 Grand Slam singles titles. Her victory in this year's Australian Open edged her past Steffi Graf's 22, an Open era mark that seemed unsurpassable not long ago. Australia's Margaret Court, who retired in 1977, has 24 singles titles, but 11 of them came at the Australian Open, and many top-ranked players opted not to make the trip to Melbourne until the early 1980s.

Roger Federer, 35, is the Rudolph Nureyev of his sport. He’s probably the greatest player to ever step onto a tennis court. His latest milestone was capturing his 18th Grand Slam singles title, breaking his own record with a win at the Australian Open over his friend and nemesis Rafael Nadal. Those 18 wins included victories over other all-time greats like Novak Djokovic and Andy Murray. Spaniard Nadal, indisputably the greatest player ever on clay, and just four behind the Swiss ace with 14 major singles titles, was his opponent in eight Grand Slam singles finals. Serbian superstar Djokovic (12 grand slam titles) was on the other side of the net four times, and Andy Murray (three grand slam titles) three times.

Serena and Federer are both coming off wins at the Australian Open, prompting debate in some circles over which of them is the greatest player of all time. For the sake of argument, let's first assume this is a legitimate question. This requires the assumption that men's and women's tennis are lumped together into one sport known as “tennis” and that the single greatest player can be chosen from among all male and female tennis players since the game began.

Serena’s January win over her sister Venus (seven Grand Slam singles titles) in Melbourne marked the ninth time they'd faced off in finals of a major. Serena’s other finals match-ups include four with Russian-American star Maria Sharapova (five Grand Slam singles titles), one with five-time Slam champion Martina Hingis, and one with Lindsay Davenport (three Slam titles). Serena’s lost Grand Slam finals to Sam Stosur, Angelique Kerber, and Garbiñe Muguruza, who have four major singles titles between them. In 28 Slam final appearances, Federer has lost to three players—Olympic tennis singles silver medalist Juan Martin del Potro, and two players still in the running for the G.OA.T title, Nadal and Djokovic. In other words, the trio that's held him to only 18 major titles has won a total of 27 of them. Those Serena's lost to in finals hold 16 major titles.

Federer has played in a men's tennis era that's probably the most competitive in the game's history. Serena has not. Steffi Graf lost a total of nine times in the finals of major tournaments, including twice to Martina Navratilova and three times to Monica Seles, who hold a total of 40 major singles titles between them and are both considered to be among the all-time top five women players. Serena’s 23 titles to Graf’s 22 do not make her the greatest female player in history. She's never beaten an all-time top five player to win a major. Graf did it eight times, including a win over Chrissie Evert in 1988, five wins over Navratilova, and two over Seles.

Returning to the assumption that tennis is one unisex sport from which you can choose the single greatest player, examination puts this notion to rest. On May 13,1973, the 55-year-old former touring pro Bobby Riggs beat the world number one women's player, Margaret Court, in the Battle of the Sexes match in Ramona, California 6–2, 6–1. While it hardly seems possible a 55-year-old man could now beat Serena, she’d have to go way down the rankings in the current men's field to find someone she could beat, never having played a best of five sets match in her career.

A facile recent piece in Forbes by Allen St. John gave the “contest” between Federer and Williams to Serena after setting up six categories to judge them, awarding the edge to Serena in five of them. St. John writes that Federer cannot be considered G.O.A.T because Nadal has dominated their career head-to-head matches, including winning six of their eight Grand Slam finals matches, while failing to then suggest who is the greatest. Federer’s win in Melbourne makes his record versus Rafa 7-9 on hard courts and 8-10 on grass. Nadal leads 13-2 in their matches on clay, with nearly all the 13 wins coming between May 2005 and May 2011, when the Spaniard was nearly invincible on the surface. This isn't disqualifying.

Serena will probably match Margaret Court's 24 singles majors soon, but only two more than Graf still won't make her women’s G.O.A.T., considering the deep disparity in who they beat to get the titles. Some feminists want to believe that Serena is greater than Federer, but the two are competing in different sports. Men's tennis is much deeper in talent and more physically taxing. Making direct comparisons is bogus and unproductive, especially considering that Steffi Graf’s still the women’s G.O.A.T.