Troy Tulowitzki: The Most Feared Power-Hitter In Baseball

Just one part of the Rockies' excellent 12-5 season. 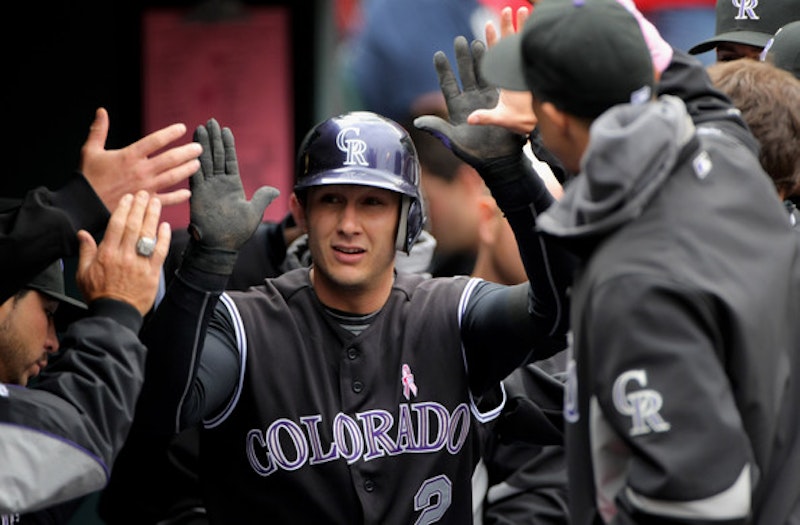 The Colorado Rockies, with a 12-5 record as of April 20, are leading the NL West and have the best record in the National League. Their early season success is due in large part to the continued emergence of young superstar shortstop Troy Tulowitzki. Tulo has evolved into the most feared power hitter in baseball. Boasting a nickname that makes him sound like a conquering warrior and a batting streak to make Albert Pujols jealous, Tulo has a contract to match as the Rockies made a preemptive strike and locked him up through the 2021 season at more than $120 million in guaranteed money.

Tulowitzki currently leads the Majors with seven home runs to go with 14 RBI in the Rockies' first couple of weeks. While those numbers are impressive they become staggering when you look at what Tulo did last September. After hitting just 12 home runs through August of the 2010 season, he went off in September. He crushed 15 bombs and drove in 40 runs in the final 31 days of the season.

Tulowitzki certainly didn't get complacent after inking his crazy long contact extension. He has somehow managed to pick up this season right where he left off. At a time when former stars like Manny Ramirez and Barry Bonds are publicly disgraced and Derek Jeter looks perfectly ordinary, Tulo offers a glimpse of MLB's next generation of stars. Along with teammate Carlos Gonzalez, who also signed a long-term extension over the winter with Colorado, the Rockies have two of baseball's best young players. Tulowitzki (26) and Gonzalez (25) could be thrilling baseball fans for the better part of the next decade.

Couple those young stars with veteran Todd Helton and a stable of live arms, like Ubaldo Jimenez and Jhoulys Chacin, and it's easy to see that Colorado's fast start may be long-lived.

It will be interesting to see if MLB takes the opportunity to properly market its young stars like Tulo and Cargo. MLB has lagged behind the NFL in recent years in large part due to its own failure to make household names of its best players. MLB has recently been so focused on the Yankees and Red Sox that any player not from New York or Boston might as well be playing for the Rochester Red Wings. Colorado certainly isn't a traditional baseball hotbed but with young players doing extraordinary things it could be on the verge of a sustained streak of success. I will give baseball some credit for featuring Twins Catcher Joe Mauer very prominently in advertising campaigns this spring. It's the first step but significant nonetheless. Mauer is a great player but as the saying goes, "chicks dig the long ball." In that case chicks, and baseball fans in general, are gonna love Tulo.