The disgraced slugger does something smart for once: He leaves the country. 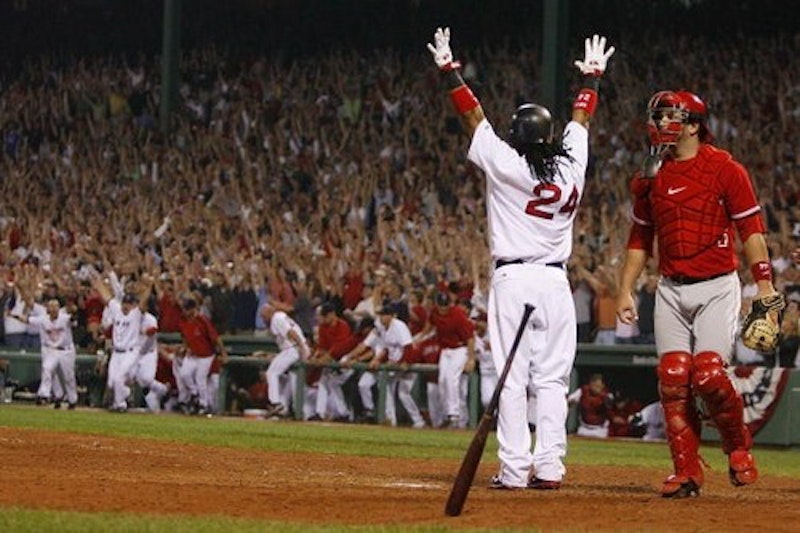 We don’t have Manuel “Manny” Aristides Ramirez Onelcida to kick around anymore. The superstar slugger has taken his toys and gone home, in the sort of sulky snit that many Red Sox fans will recognize.

Actually, that’s not quite true. Ramirez didn’t go home, but to Spain, where bulky ex-baseball players under a cloud of steroid suspicions apparently don’t get that much attention, goofy smile or no.

And, absent or not, we do still have Manny to kick around, in the form of the immediate and ongoing debates as to whether he deserves consideration for the Hall of Fame after testing positive for performance-enhancing drugs for the third time. Rather than serve the automatic 100-game suspension, Ramirez jetted off to Espana; his last team, the Tampa Bay Rays, will have to do without his .059 batting average.

Keep in mind: Ramirez isn’t facing any legal threats, at least that we’re aware of, so the necessity of fleeing the country would seem to be non-existent. Then again, “Manny being Manny”—a phrase tediously pounded into the ground over the years—he probably wasn’t too interested in letting the facts get in the way of a vacation on the Mediterranean.

No warnings were given to the Rays or fans, of course; Manny’s never swung that way. After various faked injuries and a cavalier attitude, Boston finally shipped him off to the Dodgers in the middle of the ’08 season. There he proceeded to hit .396 and belt 17 home runs in 53 games—roughly 100 points better and just three home runs fewer than he’d produced that same year in 100 games for Boston.

Yeah, Manny wore thin in Boston that year, and was made all the more sour when news broke in 2009 that Ramirez and slugging sidekick David Ortiz had both been found to be juicing in 2003, irrevocably tainting the Bosox’s 2004 World Series victory. Ortiz, who earlier in the ’09 season declared that anyone caught doping should be suspended for the season, ended up playing the “I didn’t know what I was putting into my own body” card that’s worked so well for others so accused.

Ramirez ended up getting caught juicing in L.A. during the same ’09 season, serving a 50-game suspension. “I do want to say one thing: I’ve taken and passed about 15 drug tests over the past five seasons,” Manny heroically said at the time. When he returned to the Dodgers he was plainly a non-juiced shell of his former self, following the time-honored tradition of post-failed test performances by the Jason Giambis and Sammy Sosas of the world. L.A. finally got rid of him last season, sending him to the White Sox to no measurable effect; he signed with Tampa during the off-season.

(Imagine if the Mets had managed to bring him onboard in 2008, as they so desperately wanted to do: Fans of that snake-bitten franchise would probably still be lined up to hurl themselves from the Queensborough Bridge.)

So does Ramirez belong in the Hall? 555 homers and a lifetime .312 batting average over 18 seasons (or 19, if you want to count those five fabulous games for Tampa this year) sound impressive enough, and in a world where the likes of Bill Mazeroski, Andre Dawson and the whine-until-you-get-there Bert Blyleven are Hall of Famers, why not?

But there’s the inevitable Mark McGwire question. Big Mac stands virtually no chance of getting in there thanks to his misadventures with “Andro” and his performance in front of Congress (“I’m not here to talk about the past,” which deserves induction into a Hall of Fame all its own); likewise for such names as Sosa and finger-wagging Rafael Palmeiro. Roger Clemens, as a pitcher, is a more complicated case. And then there’s always Barry Bonds, who managed to more or less skate in his perjury trial yesterday.

Ramirez, of course, didn’t break Hank Aaron’s home run record, and—even without the failed drug tests—those phantom injuries and general laziness probably would have prevented him from getting too close to 700 HRs. There’s been endless debate over the past few years about how, if you’re going to exclude those who were “obviously” juiced, you need to reject just about everybody from the same era. Which would include Roberto Alomar, whose own possibly roid-rage spitting at an umpire was overlooked when he got voted in this year.

I’d say Ramirez doesn’t deserve induction at least until the Hall definitively decides on how to address the steroids issue (a separate wing, perhaps?). And besides, who’s to say he won’t try a comeback once the noise has died down a bit? It worked, sort of, for Ricky Williams in the NFL; all you really need is one of those rah-rah “30 on 30” type ESPN specials to get the ball rolling.