Can they reclaim their top pitching status in the AL East? 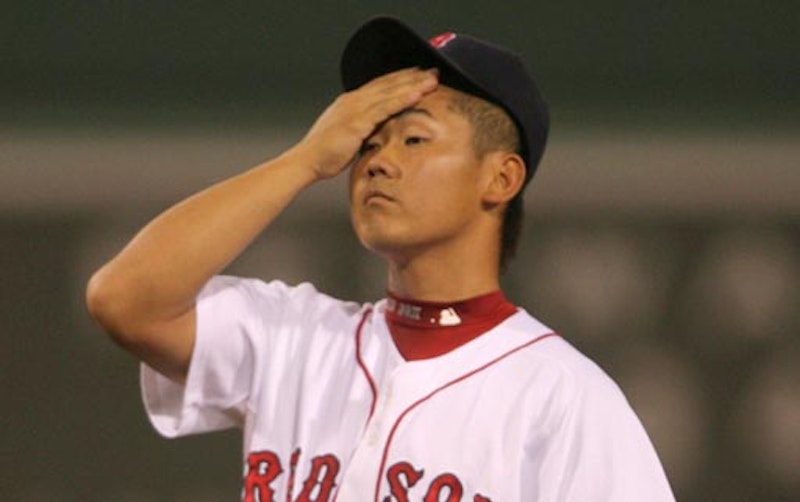 The Boston Red Sox entered the 2011 season as the unquestioned champions of the Hot Stove League and the odds on favorites to take the AL crown. An odd thing happened on the way to October. Boston's deep and talented pitching staff has been doing its best Toledo Mud Hens imitation for the first two weeks of April. The starters have been hit hard, early and often.

After beginning the season 0-6, including a sweep at the hands of the lowly Cleveland Indians, Boston's latest indignity came in the form of 16-5 drubbing by the Tampa Bay Rays. Tampa has its own troubles, which I'll get to later this week, but for one night they looked like the Rays of old. Of course the scattershot pitching of Dice-K Matsuzaka had a lot to do with Tampa's success.

Dice-K hasn't been the same since his breakout 18-3 season back in 2008. He's regressed every year since and currently sports a 12.86 ERA in 2011. Matsuzaka seems timid on the mound, often refusing to challenge hitters and working deep counts. Maybe you'd be timid too if you had allowed 10 runs and 14 hits in 7 innings. But Boston’s troubles don't end with Dice-K.

John Lackey, with an $82.5 million contract, currently has a 15.58 ERA in this young season and a woeful 2.42 WHIP. Lackey was a disappointment in 2010 after signing his massive free agent deal and fleeing the Angels for Beantown. He managed to go 14-11 in his first season for the Sox but his peripheral stats took a dive, including ERA, WHIP and strikeout rate. At 32 and having logged over 1700 Major League innings it's unlikely Lackey will experience a career renaissance. The hope in Boston has to be that he can at least get back to his 2010 form.

The Red Sox made some major offseason investments to improve their offense. They dealt three prime prospects for Adrian Gonzalez and gave Carl Crawford over $100 million dollars to patrol left field. The pitching seemed to be the strength of the organization with Jon Lester and Clay Buchholz looking like a pair of young aces, Dice-K returning from injury and Lackey and Josh Beckett as innings-eating workhorses. So far only Lester and Beckett have held up their end of the bargain. Buchholz hasn't been pounded like Lackey and Matsuzaka but he has surrendered an eye popping five homers in just 10 innings this season.

It was assumed the Yankees would struggle to find reliable pitching and Tampa would struggle to score, which could allow Boston to run away with the AL East title. The Yankees lack of pitching depth will rear its ugly head at some point, and Tampa's offense is languishing with Evan Longoria sidelined and Manny Ramirez bolting for Spain, but if Boston doesn't get its rotation straightened out soon it will make for a very interesting and weird summer in baseball's toughest division.