Travis Snider Could Be a Bargain for the Orioles

Losing Nick Markakis was a blessing for Baltimore. 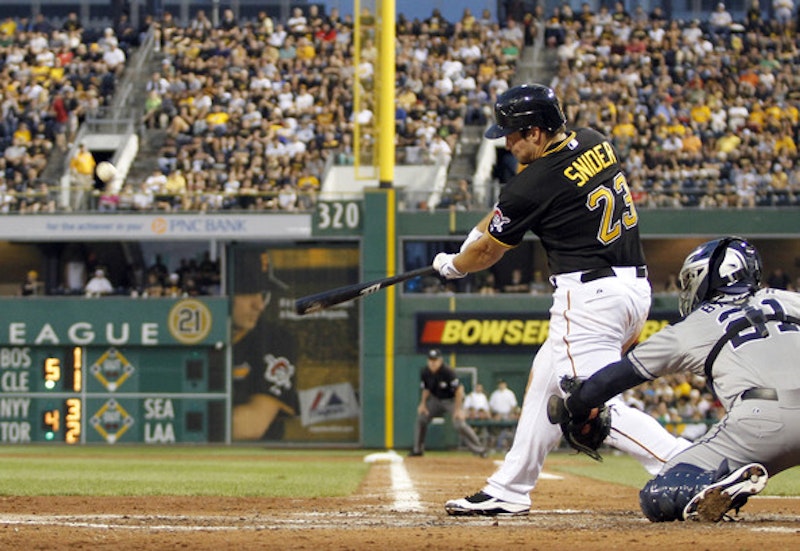 The Orioles completed a trade with the Pirates earlier this week that delivered outfielder Travis Snider to Baltimore and sent minor league lefty Stephen Tarpley to Pittsburgh. The deal made the O’s a nominally better team since they’re better with Snider in right field than with Tarpley pitching for the Aberdeen Ironbirds. Snider is an intriguing player. A former first round pick with AL East experience who battled injuries and inconsistency, he emerged as a reliable bat for Pittsburgh down the stretch last season. Snider is a typical Dan Duquette-style gamble, low-risk, potentially high-reward, and acquired at little to no cost to the big league club. The problem isn’t so much what Snider is as what he isn’t. Snider isn’t Nick Markakis.

Duquette and Buck Showalter know it’s not an equitable solution. Markakis is an established professional hitter and has been a plus defender for much of his career. Snider can be viewed as another tool in Showalter’s shed rather than the ultimate solution in right field. Snider came into his own after the 2014 All Star Game, raising his OPS more than 100 points. He also launched nine home runs after the break in a part-time role. Snider could platoon with Delmon Young at DH, or Steve Pearce in RF, to make use of his lefty stroke against Camden Yards’ short right field porch. Snider’s $2 million salary is considerably lower than any of Baltimore’s limited free agent options, and that he’s under team control through 2016 could make him a bargain. The flip side is that maybe Snider isn’t really a changed man, and his 2014 turnaround was just the product of a hot streak and small sample size. If that’s the case the Orioles can take solace in the fact that Tarpley won’t be contributing in Pittsburgh any time soon.

Contrary to popular belief, the best thing that happened to the Orioles this offseason was Markakis rejecting the reported four-year $40 million offer from Baltimore to sign with the Braves. While the O’s could’ve made a legitimate argument for going to such lengths to retain a reliable fan favorite, the Braves can make no such claim. The four-year $44 million deal Markakis signed with Atlanta made little sense, and has made less sense every day since. The Braves appear to be in a full scale re-build in anticipation of the opening of their new ballpark. Markakis is rehabbing from a neck surgery performed before the ink dried on his new deal. Orioles fans would’ve cheered Markakis as a returning hero on Opening Day had he accepted the Orioles offer. Braves fans will be presented with a second division ballclub featuring a $44 million newly imported free agent with a bum neck. Markakis spent nine years building good will in Baltimore. He’ll have no such cushion in Atlanta.

The Markakis deal is probably the worst free agent contract handed out this winter (a case can be made for Toronto’s excessive investment in Russell Martin). While many Orioles fans will be sent scrambling to identify a new favorite player, and fret over the ballclub’s leadoff spot in the batting order, Duquette is likely thankful for dodging a bullet. The supply of free agent outfielders was thin from the start and Baltimore was connected to nearly every available name. Atlanta struck first, handing Markakis a deal for too many years and too much money. While Colby Rasmus, Alex Rios, Nori Aoki, and Mike Morse settled for shorter term deals, the Orioles sat on the sidelines. Fan frustration grew as some suggested that Duquette was more concerned with becoming CEO of the Blue Jays than improving the Orioles. The Travis Snider deal isn’t enough to quell such suspicions, but it’s a worthwhile gamble for an organization that has made a habit of finding treasure among other’s trash.