Reflections from a Phoenix native. 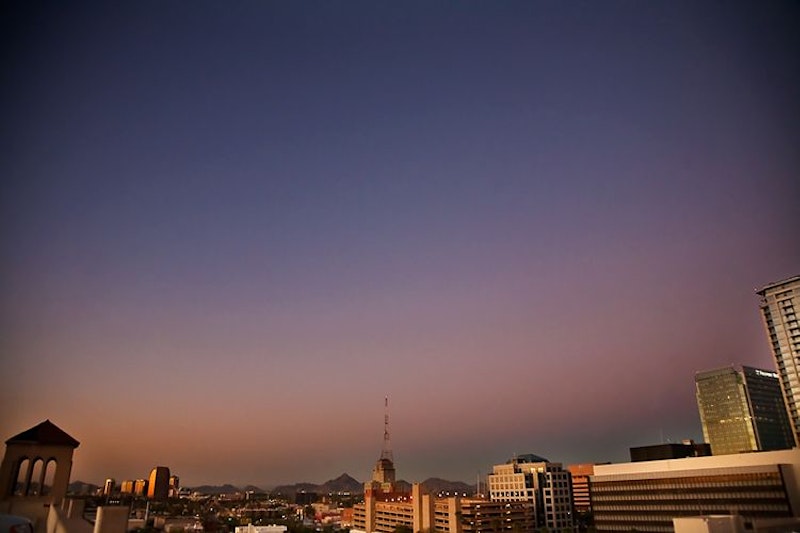 It’s the morning after Super Bowl XLIX. Like many of the one million visitors that descended upon my city this past week, I had a lot to drink Sunday night. Unlike those visitors, however, I wouldn’t be catching a flight at Phoenix Sky Harbor International, shoving my way through the terminal, checking to see if my East Coast-bound departure is delayed. Also unlike those visitors, I didn’t participate in a single Super Bowl event or attraction.

For the past week, my city belonged to the NFL, Bud Light, Tostitos, Pepsi, one million tourists and to the legacy of Phoenix’s urban core being robbed of identity and replaced with the palatable culture of corporate America and the Sports-Industrial complex.

I spent most nights last week in my favorite local watering hole, situated off the beaten path in a historic renovated bungalow with no TV and a seedy atmosphere that would turn most tourists away. I observed my city from afar, noting strange and curious changes in character that cater to a national audience.

During major events and holidays, the warning “Drive Hammered, Get Nailed” greets drivers on electronic message boards on Interstate 10, which cuts through Phoenix on the way to Los Angeles. It’s an indicator of the overall tone used to communicate messages of safety and concern. Last week, in contrast, visitors were greeted with, “Designate a Driver, Avoid a DUI.” I chuckled, imagining a conversation where it’s suggested that PSAs during Super Bowl week not contain subtle undertones of violence and aggression.

Tourists may have seen these messages driving on the I-10 as they made their way between Downtown Phoenix and Westgate in Glendale, where the actual game was hosted. Luckily, there are few instances where I ever need to travel to Glendale—a city that is less a beacon of light and more a siren of warning as to the dangers of dumping public money into sports infrastructure.  The Westgate Entertainment District, which is just a glorified outdoor mall, is a conglomeration of cookie-cutter franchises. It’s a cultural landmark here, sadly enough.

Back in Downtown Phoenix, more applaudable cultural landmarks exist that the city made little effort to showcase. More than a year ago, the Phoenix Office of Arts and Culture commissioned a friend of mine for a public art project that was installed at 1st St. and Adams, smack in the middle of the NFL-fueled jubilee. The installation was two large banners with a printed design featuring bicyclists and pedestrians in an urban scene fastened permanently onto the second story of a building. It was replaced with NFL advertisements looming over the intersection, in case anyone forgot who was paying for their kitsch. Perhaps I’m naive for thinking the city would be proud to display the public art it paid for.

Now, I’d be lying if I said I didn’t benefit from the Super Bowl coming to Phoenix. I work at an upscale steakhouse in a suburb of Phoenix that was heavily patronized by both the Seahawks and Patriots entourages. I waited on Robert Kraft, owner of the Patriots, and set up tables wide enough to seat 15 linebackers, making between $20-$25/hr. It was a good week for me, money-wise.

It’s not just the midday traffic and obnoxious drone of helicopters circling overheard—there are serious criticisms to be made against the business-model that says a city needs mega-events to grow, especially when it’s at the expense of people and communities that populate the area.

Downtown Phoenix is experiencing a development boom, particularly around the Roosevelt Row Arts District where I live. In a city as geographically spread out as Phoenix, people have worked hard to create even the semblance of a dense, urban, thriving arts district. Not like the “Westgate Entertainment District,” but a real one, where much of Phoenix’s history is contained, which now faces the threat of demolition.

On the Thursday before Super Bowl Sunday, nearly 100 people gathered in front of a building slated to be demolished before walking through Downtown carrying a life-size coffin. It was a symbolic mock funeral for the arts district and a protest against the widespread demolition of historic buildings to make way for massive suburban-style apartment complexes. The city does very little, if anything, to intervene, aside from granting developers every variance, tax break and pardon they request.

I’ve watched as tourists enjoy the shops and green areas that line the street where I live—a redeeming experience for me. For many, Roosevelt Row is a cultural oasis and I’m happy to share it with others. Unfortunately, half a dozen buildings in a short span of blocks are slated for demolition in the coming months. Inward-facing apartments that ignore the street and alienate the pedestrian will be constructed in their places.

One of the largest threats an urban community faces is rapid change, which tears apart the intricate and interwoven fabric tying it together. The massive investment in convention centers, sports complexes, and tourist amenities that are justified using events like the Super Bowl help to accomplish such rapid change.

The Super Bowl changed the city in a way that frightened me. It might sound unfair, but it represented a commonly perpetuated ideal that I struggle against. I’m emotionally invested in this place. I’ve lived in Phoenix my entire life and have fought hard for a corner that provides relief from the beige, stucco strip malls and chain restaurants that surround.

The Super Bowl may be over, but the rapid change that threatens communities like the Roosevelt Row Arts District is here to stay. I’ll be here, too, peering out from my little corner, as it continues to grow smaller.

—Daniel Mills is a writer and journalist in Phoenix, Arizona. He is the founder and editor of sprawlr.org, an online publication for Arizona non-fiction.