Football Is No Longer My Sport

The violence and machismo has become too much. 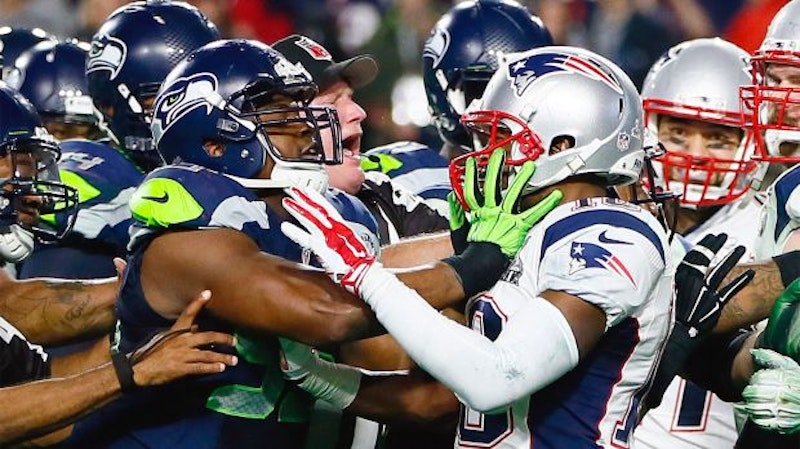 The sarcastic voice inside me rants: “Now that American football season is over, when will we get a chance to see horrific concussions happening right before our eyes, before the television broadcast quickly cuts to commercial? Which millionaire sporting commissioner will we hear spew blatant lies when forced to talk about subjects he and the owners would rather slide back out of sight? (Don’t pretend that the other major American sports commissioners are even close). Now that the NFL season is over, how will we learn about the physics of air being pumped into and out of leather balls? Where will comedians go for their puerile ball-jokes? Where will we turn to hear phrases like, ‘Beast Mode?’ Now that the NFL season is over, which overly-macho, insanely violent game will we turn to next? What are we supposed to do on Sundays?”

Now that the NFL season is over, let’s take a minute to collect ourselves. The pragmatic voice reasons: “On a serious note, football is not entirely evil. It brings people together. It allows them to scream and shout, and slap each other silly. It allows men who need a certain kind of primal bonding to have just that. It provides a sense of identity, teamwork, sacrifice and discipline for countless young men in our society. It provides a physical and emotional outlet for many young boys, young adult males, and even adult males in our society. But let me ask you this: at what cost?”

What other sport condones the expression of rage so implicitly? (Rugby? Maybe Ice hockey? Curling?)

What other sport so endangers the actual brain?

What other sport enables men to divide off so resolutely from women, into their “man caves?”

What other sport pumps endless machismo into our culture?

America is now deflated. How will ESPN function, without any NFL-driven controversy? What will become of Skip Bayless and Stephen A. Smith? Will they dig up dirt on NBA players? College basketball players? Hockey doesn’t capture the animal spirit of Americans the same way that football does. ESPN will be forced to wait another few weeks before Alex Rodriguez joins his reluctant Yankee teammates for Spring Training in Florida. Without free agency or playoff games, what will become of the 24-hour sports-news worldwide-leading gossip-centric bullshit machine?

I played football as a kid. I loved running with the football. I loved escaping from tacklers, just as I loved escaping from my older brother’s grasp. Fortunately, I stopped playing when I was 11. I chose to stop because I was tired of the macho environment that surrounded the game, the bullying boys, and the over-grown boys who coached the youth teams.

I watched the Patriots with my dad and my brother as I grew up. Sundays meant Drew Bledsoe throwing 45 passes and the pear-shaped Bill Parcells patrolling the sidelines. We shared glorious moments, cheering passionately, as the underdog Patriots gradually climbed the ladder, from laughingstock (1-15 in 1990, 2-14 in 1992) to playoff team (10-6 or better in three of four seasons 1994-1997), to Super Bowl contender (2001-2004).

It’s only in the last three or four years that I realized the Patriots were no longer my team, though it was probably around 2003 that I realized football was no longer really my sport. It was the game that my dad grew up watching with his dad. The Pittsburgh Steelers were the family’s team. Baseball was a distant second. Basketball didn’t register. As a teenager, basketball became my obsession. Baseball was what I shared with my older brother. Football watching was part of the “dad’s house” experience.

Part of the process of the last decade has been reckoning with my own identity in a genuinely painful way. I’ve written about my Celtics and my Red Sox in an obsessive and all-consuming way. In a way that probably seems insane to many people. In a way that’s sometimes alienated my wife (a fan of both basketball and baseball). Maybe those Celtics playoff games and those Red Sox post-seasons games mean too much to me. Maybe that’s why I decided to be honest with myself about the NFL and the Patriots over the last couple of years. It’s hard to change the way you react as a fan, the way you think about a sport. For me, reading and writing are critical parts of being a fan. Good sportswriting is sublime. Knowing the stories and the strategies adds layers of interest, creating an obsession. Some would say you’re born into that universe. But like any aspect of identity, you can choose how you attach. Many people grow out of their obsessions with sports. Responsibilities take over. Work responsibility. Family responsibility. Others become jaded by the corporatization of the professional sports world, or the endless hype and gossip that accompanies so much of the games. I still have a pure feeling of joy when I’m watching sports. I won’t let that die.

I hope that all football fans get to experience that pure feeling of joy as well. It’s just not for me anymore.