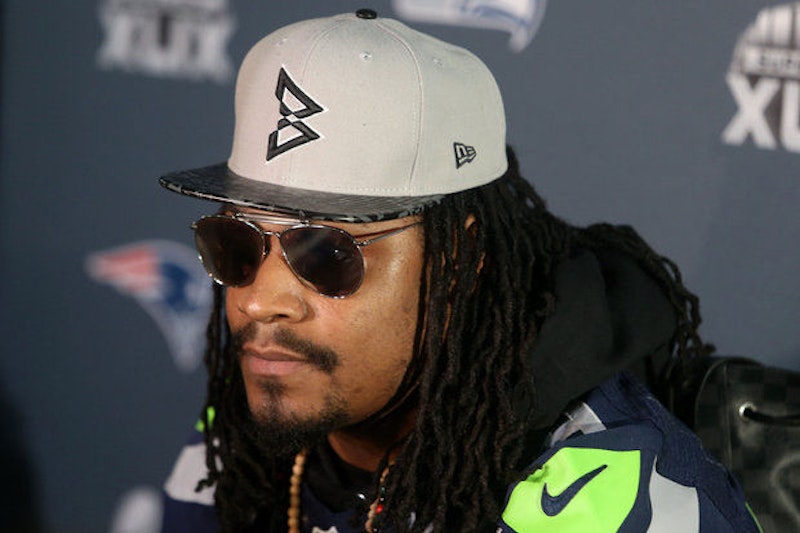 Marshawn Lynch has drawn a lot of criticism this week for his stonewalling of sportswriters covering the Super Bowl. Lynch did the bare minimum in his daily media sessions, never staying for longer than five minutes and refusing to answer direct questions. Lynch’s act has worn thin with the NFL media throng, and the league office, which is fine with me.

Lynch has had some legal issues in the past. In fact, that’s what led the Buffalo Bills to ship him to Seattle. He believes the media treated him unfairly during his time in Buffalo. Now that he’s a star and Super Bowl champ the NFL media is interested in what Lynch has to say. He’s having none of it.

Anyone hypercritical of Lynch’s press conference charade should look no further than last week’s Deflategate coverage to unearth his motivation. In a matter of hours Tom Brady and Bill Belichick went from all-time greats to possible disgraced cheaters. The NFL did nothing to dispel the accusations, or bring about any resolution. Rather than talking about his sixth Super Bowl trip, Brady was left to openly discuss the firmness of his balls. Brady is arguably the best QB in league history but he may be best remembered for a series of sound bites, YouTube clips, and memes about his deflated balls. And the media wonders why Marshawn Lynch doesn’t want to talk to them. If they made a mockery of Tom Brady just imagine what one misstep from Lynch could yield.

Deflategate was contrived nonsense designed to fill the league’s news cycle in the week between the conference championship games and the arrival of the conference champions at the Super Bowl site. The league likely fed information about potentially deflated balls to alleged reporters like Mike Florio, Jay Glazer, and Peter King. Those reporters, who essentially act as independent contractors in the NFL’s public relations office, ran with the story. The Internet and Twitter exploded giving an unsuspecting public #Deflategate and leading otherwise unconcerned suburban grandmothers to curse Brady and Belichick as cheaters. A patsy was predictably unearthed before the Super Bowl week festivities got under way when Glazer put the blame on a Patriots’ ball boy. Patriots’ owner Robert Kraft somehow kept a straight face when he called for an apology from the league. Kraft thinks we don’t know that he acts as the de facto commissioner.

Did the Patriots really deflate footballs to gain an advantage? I don’t know or care. Would deflated footballs give New England any competitive advantage? Probably not, at least according to most of the retired players I’ve heard interviewed. Will the league ever act on Deflategate? The NFL does an expert job of drumming up nonsensical storylines when the going gets tough. Stories of player arrests, concussion lawsuits, spousal abuse, suicide and serial rape are routinely replaced in the headlines with old standbys like the potential elimination of PATs and kickoffs, placing a team in London, and increasing the season to 18 games.

Marshawn Lynch stayed silent through this week’s nonsense. It wasn’t by design but Lynch unwittingly flew above the fray as sportswriters critical of his actions gleefully slopped in the latest batch of NFL endorsed muck. Lynch’s teammate Richard Sherman couldn’t help himself as he took shots at the integrity of both Goodell and Kraft. Sherman should be every fan’s favorite player for calling out the hypocrisy of the league and its wayward leadership. The next time the assembled NFL media takes offense at Lynch’s refusal to engage in their buffoonery they should go to YouTube to remember that time the greatest QB of this generation spent three days answering absurd questions about deflated balls. Lynch doesn’t want to talk to the media? Who could blame him?