Has the demise of the Lakers’ been exaggerated? 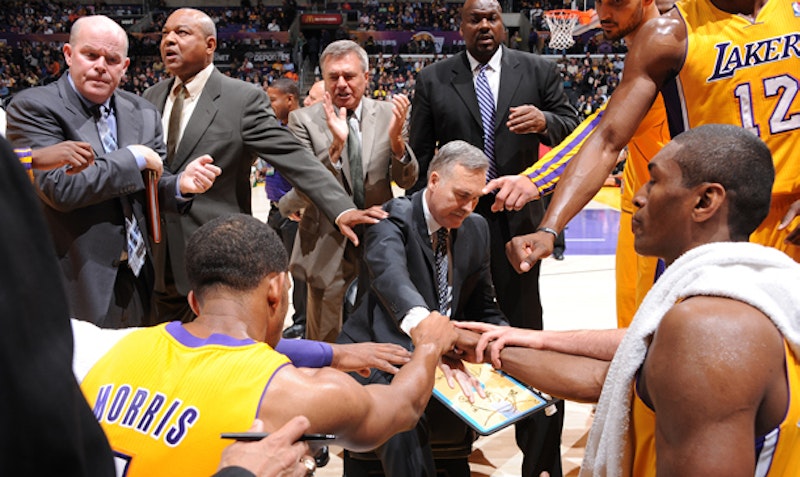 The NBA season is getting underway and basketball fans can obsess over various storylines. Here’re a few I’ll be keeping tabs on this season.

Can Greg Oden and Michael Beasley contribute in Miami?

The defending champs haven’t had much in the way of cap space over the past three seasons. In the offseason Miami cut the oft-injured Mike Miller and made a pair of low-risk, potential high-reward signings. Beasley is a proven scorer who has traditionally preferred weed and tattoos to playing defense. After burning out in Minnesota and Phoenix, Beasley is back with the team that made him the #2 overall pick in the 2008 draft. Beasley should give coach Erik Spoelstra another big wing on the second unit and may even allow LeBron James and Dwyane Wade the chance to hit the bench simultaneously on occasion. If Beasley can steer clear of South Beach he could offer Miami a dynamic scorer off the bench to pair with Ray Allen.

The Heat lured Oden back to the NBA after a nearly four-year absence. The 2007 #1 overall pick hasn’t played in the league since December 2009 and has been in just 82 games over his injury-riddled career. Oden’s been plagued by knee injuries but seems sincere in his efforts to return to form. Don’t expect Oden to play much in the regular season. He was signed to get healthy in the hopes that he could provide a defensive and rebounding presence against Roy Hibbert of Indiana and the Bulls Joakim Noah come playoff time. If Oden plays in more than 20 regular season games I’d be shocked.

Can Rajon Rondo and Brad Stevens coexist in Boston?

The Celtics finally turned the page on the “Big Three” and went into full-fledged rebuilding mode. Danny Ainge probably stuck with Paul Pierce and Kevin Garnett for a year too long, and he would’ve been better off shipping Garnett to the Clippers last season than to the Nets over the Summer. Either way it’s time to move forward in Boston. The Celtics scored a major coup when they landed former Butler Coach Brad Stevens to replace Doc Rivers on the bench. Stevens’ first major challenge, beyond playing with a depleted roster, will be managing the return of Rajon Rondo. The mercurial All Star point guard missed most of last season after injuring his knee. The Celtics must determine if Rondo is healthy and on board with Stevens’ plan or it’s time to move him for young talent and/or draft picks.

Can Doc Rivers get the Clippers over the top?

The Clippers have enjoyed the best run of success in franchise history over the past two seasons. What did they give coach Vinny Del Negro as a show of appreciation? A swift kick out the door. The Clippers booted Del Negro and traded a future draft pick to Boston for Doc Rivers. The Clippers then sent potential star guard Eric Bledsoe to the Suns in a sign-and-trade deal that brought back Jared Dudley and sharpshooter J.J. Redick. The Bledsoe deal exhibited that this is not only Rivers’ team, but his front office. Doc has the horses and the long-term contract to succeed. As an added benefit the Lakers appear to be headed for a downturn, opening up even greater opportunities for L.A.’s “other” team.

Has the demise of the Lakers been overhyped?

With Kobe Bryant returning from a torn Achilles suffered last April and Dwight Howard taking his talents to Houston, the Mike D’Antonio-led Lakers are at a crossroads. Bryant is unlikely to exhibit his trademark explosiveness early in the season. The now 35-year-old Bryant may never again be the dynamic force of the past 16 seasons, but I’m not betting against him. If the Lakers can stay healthy, a big question mark with their aging roster, they should challenge for one of the last remaining playoff spots in the West. The bigger question in Los Angeles will be who do the Lakers land next summer when Pau Gasol comes off the books and LeBron James and Carmelo Anthony potentially hit the free agent market.

After nearly three years of hemming and hawing, Dwight Howard finally committed to a franchise when he signed a long-term deal with the Houston Rockets. I’ve read several national pundits exclaiming the virtues of Howard and suggesting that he’s a legit MVP candidate this season. I don’t see it. I have no doubt he’ll be happier in Houston away from the limelight of L.A. and the glare of Kobe Bryant but Howard still won’t even be the best player on his team, let alone the league. James Harden is the Rockets’ best player and the true MVP candidate. I’ve no doubt that The Beard will be a more generous playmate than the Black Mamba but it still won’t be enough to land Howard atop any MVP lists.

The Bulls battled last season despite the season-long absence of All Star PG and former MVP Derrick Rose. The former #1 overall pick appears to be healthy and ready to play a full season in an attempt to dethrone the Miami Heat. While Rose’s health is the Bulls’ biggest question mark the ability of Jimmy Butler to shine as the starting shooting guard is next on the list. Butler showed flashes in his second season and with Rose assuming ball handling duties Butler should get plenty of scoring opportunities and minutes. A healthy Rose and Butler possess the type of backcourt athleticism that could give the aging Heat fits come playoff time.