Speculation on the dream team. 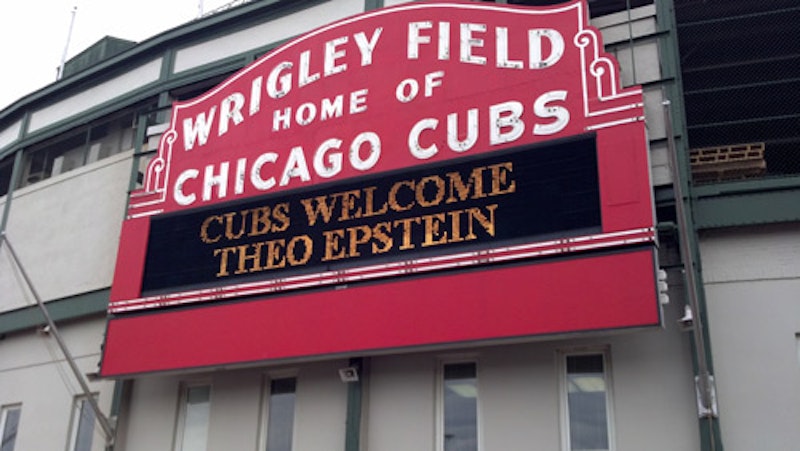 The Chicago Cubs introduced Theo Epstein as their newly appointed President of Baseball Operations/Savior in a press conference last week. It was giant love-in at Wrigley Field as Cubs principal owner Tom Ricketts gushed over Epstein’s credentials and plans for the future. It was a good day to be a Cubs fan. Those days come few and far between.

The Cubs, under former general manager Jim Hendry, were prone to costly plunges into the free agency pool. The Cubs organization has traditionally not produced enough quality talent to sustain a competitive team at the Major League level, thus forcing overspending on aging former stars. The strategy worked well enough to get the team to the playoffs in 2007 and 2008 but they were swept in the divisional round in both seasons.

I commend Tom Ricketts for taking bold action and getting the man he wanted to do the job. While I think talk of curses and Billy Goats is silly, that comes with the Cubs job, and Epstein clearly has a history of quelling a superstitious fan base. The Cubs were shaping up to look a lot like the Baltimore Orioles in the post-Pat Gillick years. Epstein will re-energize the entire organization and no doubt place an emphasis on player development.

Epstein spoke of changing the team’s culture and paying players for their peak performance years during his introductory presser. The concept of paying players for future performance rather than past performance is no doubt a hot button topic with the Cubs fan base. Chicago is on the hook for $54 million over the next three seasons for the declining Alfonso Soriano. Along with the always volatile Carlos Zambrano, Soriano has been become the poster boy for the failures of the previous Cubs baseball administration. While fans hope that Epstein can unload Soriano and Zambrano I’d like to remind them that Epstein, and his new brain trust of Jed Hoyer and Jason McLeod, are not magicians. Those two contracts are practically immovable and will require Epstein’s dream team to get creative in trade negotiations. I’d be stunned if both Zambrano and Soriano are dealt before opening day.

Epstein’s comments also lead me to believe that Chicago will not be a major player for the services of Albert Pujols. A mid-summer hug between Pujols and Jim Hendry made headlines. There was rampant speculation that Albert could be headed to Chicago during the offseason. I don’t see it. After being burned in Boston by Carl Crawford and John Lackey, and staring at the Zambrano and Soriano contracts looming over his 2012 payroll, I don’t think there’s any way Epstein and company make a serious run at Pujols. Prince Fielder is probably out as well. Fielder may be the riskier proposition even though he is four years younger than Pujols. A few months ago I thought it was a foregone conclusion that Prince would call Wrigley home. I’m not so sure anymore.

A player that I do see the Cubs bidding for is Japanese pitcher Yu Darvish. The ace of the Nippon-Ham Fighters is just 25 years old and allegedly has some of the nastiest stuff this side of Justin Verlander. Darvish has not yet decided if he wants to play in the States. The Nippon-Ham Fighters would have to post Darvish and Major League clubs would submit bids with the winner getting the chance to work out a deal with Darvish. C.C. Sabathia is expected to opt out of his Yankees deal, and C.J Wilson is a free agent, but Darvish may be the most sought after free agent commodity this winter drawing the attention of the Yankees, Red Sox, Rangers, etc. A run at Darvish would immediately improve the Cubs rotation and fit with Epstein’s intention to pay for a player’s future performance rather than his past.