A look at Stanford's Andrew Luck. 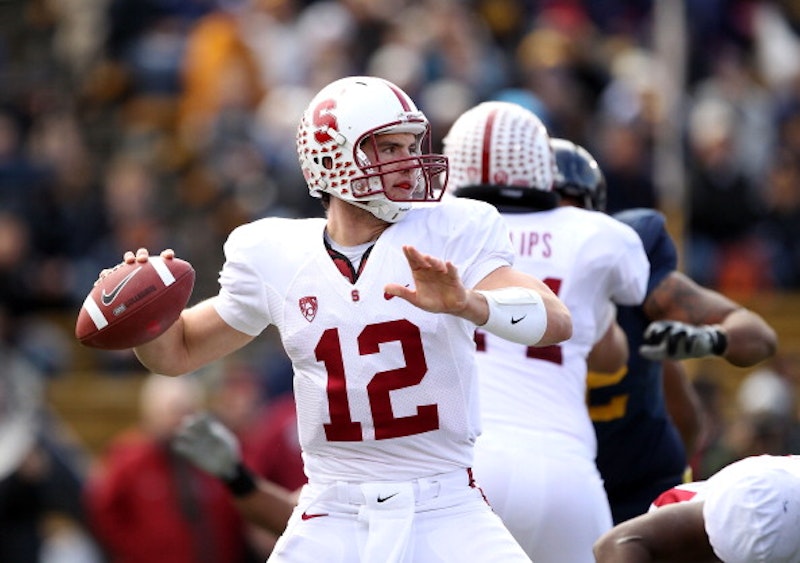 By now we’ve all heard about the “Suck for Luck” campaigns that have cropped up in several NFL cities. In some places fans are actually rooting for their teams to lose in order to improve their chances to select Stanford quarterback Andrew Luck. Hailed as the next Peyton Manning, Luck currently has Stanford ranked No. 4 in the BCS poll and is poised to stake a claim to the National Championship game should Oklahoma State stumble.

As a fan I’ve never been a proponent of rooting for teams to lose. I understand why some people get wrapped up with the promise of acquiring a talent like Luck, but generally it’s a bad idea to look that far ahead. There are too many variables at play to count on a young quarterback. NFL rosters are littered with guys who were supposed to be the next big thing and ended up the next big bust. Back in August I wrote that Seattle and Washington were essentially sucking for Luck given the ridiculous options each team had at quarterback. Eight weeks into the season the Seahawks and Skins signal callers have been a disaster but neither of those teams would even pick in the top five if the season ended today. They sure suck, but probably not enough for Luck.

Luck led his team to a triple overtime victory over USC last weekend. Luck came out of the game as the conquering hero but USC quarterback Matt Barkley fared pretty well in his own right. Barkley, a three-year starter as a junior, threw for 284 yards and three touchdowns against Stanford. For the season Barkley is completing 67 percent of his throws and has 22 touchdowns to just five interceptions. Barkley is the second best quarterback in the Pac-12 conference behind Luck. He’s also the second best QB prospect in the country. He’d be a nice consolation prize for any team that finishes out of the Andrew Luck sweepstakes.

Oklahoma junior quarterback Landry Jones is also having a stellar season. The Sooners’ loss to Texas Tech probably ruined their chances for a National Championship but don’t blame Jones. He tossed five touchdowns and threw for 412 yards in the loss to the Red Raiders. For the season Jones has 26 touchdowns to just nine interceptions and has already surpassed 3000 passing yards. Jones is generally considered a top ten talent for the upcoming NFL draft as well.

Luck is certainly the prized prospect in college football these days. He’s a terrific talent but I wonder if the hyperbole and hype machine is doing more harm than good. Then again, anyone who can make Stanford a title contender probably can’t be overhyped. The recent speculation that the Colts would select Luck with the top pick in the draft and make him Peyton Manning’s understudy is premature. It seems like a disaster waiting to happen to have an injured, aging star like Manning looking over his shoulder. Sitting Luck for two or three seasons doesn’t make much sense either as he is generally considered to be NFL ready. If Peyton Manning comes back late in the year Indianapolis may end up winning a few late season games making the whole scenario moot. Regardless of what happens with the Colts, Luck is poised to be the NFL’s top draft pick. He’ll no doubt have some leverage in determining his ultimate destination, but the presence of Barkley and Jones as top flight QB prospects could limit the trade value of the number one overall selection and possibly limit Luck’s options. Given the depth of the incoming draft class QB hungry teams like Miami, Denver, Seattle and Washington must like their chances of landing a potential difference maker at the most important position in sports.