Are the Cincinnati Bengals Contenders? 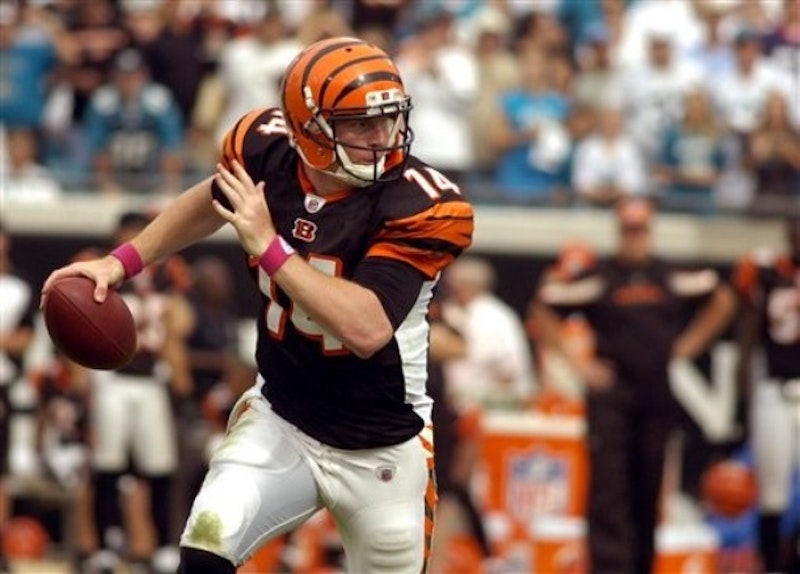 The Cincinnati Bengals are currently 4-2 and tied with the Baltimore Ravens for second place in the AFC North Division. The Bengals have been one of the NFL's most pleasant surprises through the first few weeks of the season. Cincinnati won just four games all of last season and lost veteran receivers Chad Ochocinco and Terrell Owens during the offseason.

Prior to the start of the season the Bengals looked like a four- or five-win team to me. Former All Pro quarterback Carson Palmer unofficially retired after Bengals owner Mike Brown failed to fulfill his trade request. The team drafted quarterback Andy Dalton out of TCU and essentially handed the rookie the starting job. Ochocinco was dealt to New England for a late round draft pick and the aforementioned T.O. left as a free agent. This appeared to shape up as another disastrous season in the Queen City.

I've never been a big fan of Palmer's. He failed to win a single playoff game during his seven seasons as the Bengals starter. Given the fact that he was the top pick in the draft I think it's fair to say he didn't reach his potential, and never managed to lift the Bengals above their mediocrity. The failings shouldn't fall completely on Palmer but he was never the transcendent talent the Bengals hoped for when they selected him with the in the 2003 draft. Palmer was dealt to the Oakland Raiders last week for a 2012 first round pick and a conditional pick that could become a first rounder in 2013.

Given Dalton's emergence and the potential haul from Oakland the Bengals are better off without Palmer. Dalton, who has been overshadowed by the amazing play of fellow rookie starter Cam Newton, has been a solid performer for Cincinnati. He's thrown for seven touchdowns and five interceptions and has one 300-yard passing day to his credit. Most importantly for Dalton is the win/loss record.

Dalton has made fast friends with fellow rookie A.J. Green, a wide receiver picked in the first round in April. Green has the physical skills and size to be a game-breaker for years to come. The Bengals no doubt kicked Ochocinco and Owens to the curb rather than have the moody vets rub off on their stud rookie wideout. Green has not disappointed. He's caught 29 passes for 453 yards and four scores through his first six NFL games.

The biggest surprise for Cincinnati has been the defense. In a division of traditionally strong defenses in Baltimore and Pittsburgh it is easy to overlook the Bengals. Cincinnati ranks fourth in the league, behind both the Ravens and Steelers, in scoring defense allowing just 18.5 points per game. The Bengals rank seventh in the league in footballoutsiders.com defensive efficiency rankings.

Through the first six games of the season Cincinnati has played just two games against teams with winning records. They won both games. The schedule will get tougher from here with a total of four games remaining against the Ravens and Steelers, as well a trip to Tennessee and a home game against the Houston Texans. It’ll be interesting to see how Dalton responds to facing some of the league's top defenses. The Bengals’ fast start looks to have them set up to finish the season with a winning record and a possible playoff run. Eat your hearts out Carson and Chad.