The Redskins Are Looking to Next Year

And they'll need some free agents to make it work. 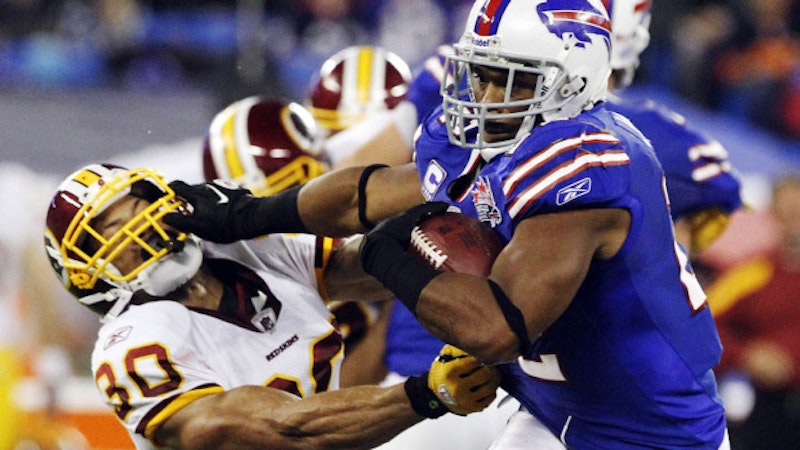 When a team loses a game, the usual course of action is to examine what they did well and see where they erred in hope of potential improvement. “If the running back holds on to the football, the offense could easily score 17 more points.” That sort of thing. In examining the wreckage left behind by the Redskins’ resounding failure/game this past Sunday, well, it's hard to know where to go with either point. When there’s nothing positive to say about any facet of the team's play, analysis is tough.

Let's start at the bottom. And stay there. The Redskins gave up roughly 400 total yards to the Buffalo Bills, while themselves gaining 178. That's bad. Not as bad as how that translated to the scoreboard though. Against a team that has given up at least 23 points every week since Week 2, the Redskins did not score a single point, losing 23-0. Furthering the embarrassment, the Bills have given up over 400 total yards of offense every single week since Week 2. The Redskins didn't reach even half of that.

The easy reaction is to start yelling about how they're incompetent and the owner should fire the whole lot. But recall for a moment that the Redskins have won 10 games twice since 1992. They've also won six or fewer games nine times. Why? This is a very bad team.

With the complexities of the NFL combined with the short-term nature of most players’ careers, the way to win in today's NFL is by building strength and redundancies through the draft. Here is the number of draft picks the Redskins had every season since 2003.

Recalling that there are seven rounds in the NFL draft and each team gets seven picks to start with, that's an average of 5.8 per season. For a team desperately in need of both talent and depth, that is borderline inexcusable. Enter the new guys. Last year, under the current regime, the one that just got planted in the ground by the Bills, the Redskins had 12 draft picks. They traded single picks for multiple picks when they could and in doing so increased the quantity of young players on the roster. That alone proves the people running the team are at least operating in the modern era.

Yes, John Beck and Rex Grossman may be the quarterback equivalent of the Republican presidential field (none of them are really any good), and the team may have suffered some serious injuries to what passes for important cogs on this football team. But nobody really expected much from the Redskins this year. Not really, right? I mean, maybe grabbing one of the last playoff spots followed by a quick first round exit. Maybe. Instead, it seems everything broke just wrong. Or plain broke.

Though nobody on the Redskins coaching staff or in management will admit it, this team isn't about this season. The Redskins are playing for next year or, possibly even the following one. As we saw on Sunday, they have no quarterback, no wide receiver, no depth on the offensive or defensive lines, their cornerbacks aren't any good, and they can't kick a field goal. Fortunately, none of that really matters now. Another smart and lucky draft with a few targeted free agent signings next off season and maybe this team will be worth the time and effort the fans and local media put into it. Until then, don't worry about it.