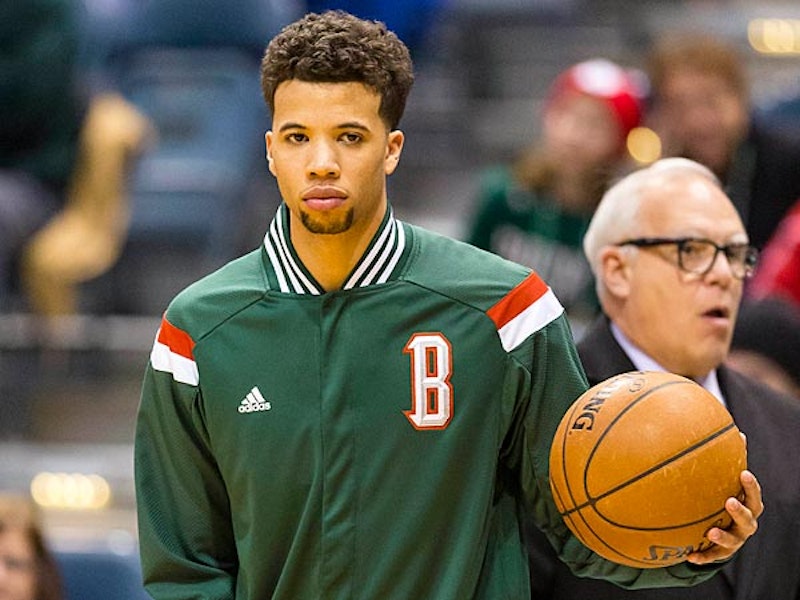 With the Wizards rolling, they’re probably sad to see the Hawks-Nets series extend, as they await the winner. John Wall torched the Raptors. No, that doesn't do his performance justice. John Wall eviscerated the Raptors. John Wall single-handedly surgically removed the Raptors from the playoffs. With home court, Toronto needed a Game 2 win. Through three quarters, Wall had 22 points and 15 assists. There was a full quarter left, and Wall had already finished the Raptors. The phrase, “Go for the jugular,” applies here.

Paul Pierce's motivational mastery helped spur Otto Porter's redemption. Porter, who was called out by Pierce prior to the series, gave Washington valuable minutes in Games 2 and 3, and will be a wild-card as the Wizards move on to the East Semis.

Washington dispatched the Raptors in an unceremonious Game 4 trouncing. To get swept is one thing. To lose by 31 points in the final game of your season? A sour taste. Kyle Lowry's uneven career remains a mystery. It seems unlikely he was anywhere near healthy enough, or in condition enough (because of a long-term back injury which kept him out for almost a month) to take on the huge load that this Toronto team needed. It's a shame. Instead of resting the injury-prone point guard throughout the year, the team jumped out to a 24-8 start, with Lowry playing dominant two-way basketball and then crumbled.

Is DeMar DeRozan the new Rudy Gay? Can't shoot with enough range to be a true offensive weapon? Great in the regular season, but not enough in the playoffs? I hope not. Also, Rudy Gay hasn't been all that bad over the last two years.

Congratulations, Michael Carter-Williams. You showed Bucks fans why Jason Kidd believed in you in Game 5. After two lackluster early games, a solid game 3, and a miserable Game 4, MCW went off in Game 5, penetrating at will and finishing with 22 points (10 of 15), 9 assists, 8 rebounds, and 3 big blocks. MCW turned his ankle in the fourth quarter of the Bucks season-saving win. We’ll see if it bothers him in Game 6 on Wednesday.

The Bucks' Khris Middleton is such an unassuming player. He's like a lesser version of Kawhi, playing harassing defense, and getting mid-range shots off with ease thanks to his long arms. He's surprisingly smooth and under control as well. Another Kawhi parallel.

Pau Gasol is complaining all the time in this series. It’s exhausting just to watch, even if he has a point at times. Gasol has rebounded and defended well, but the Bucks and their very physical play (Pachulia is a major irritant, while Henson and Giannis stretch out their wings and harass everyone) are causing Gasol to shoot only 45 percent in the series. This is the future of the NBA. Inspector Gadget arms and lots of switching on the pick-and-roll.

In Chicago's two losses, Rose has wilted. It saddens me to say, but the explosion isn't there the way it was in Game 1 and again in Game 3. In Games 4 and 5 combined, Rose is 10 of 33 from the field with 14 turnovers. He went 0 of 7 from deep in Game 5. It may sound insane, but if I were Tom Thibodeau, I’d give Rose Game 6 off. He doesn't have enough lift to be helpful on short rest. Rose wouldn't say yes to that, and Bulls fans would be irate, so that will never happen. It's worth considering, when you look at how Rose has done on short rest this year, as Kevin Pelton noted recently.

As the regular season ended, I was pleasantly (perhaps over-exuberantly) surprised by the success of my beloved Boston Celtics. I refused to allow myself to envision a series win over one of the NBA's title favorites, Cleveland. There’s a fine line between optimism and delusion. It's obviously more fun to be delusional about your team. I thought the Celtics would win one game, and hoped for two. They came close in Game 2 and again in Game 3. Game 4 was brutal. I can take solace in the fact that the Cavs’ unsportsmanlike antics (Perkins and J.R. Smith) will cost them in the East Semis, if Chicago ever gets there. The Bulls can't seem to shake the up-and-coming Milwaukee Bucks. More on that series below. Smith has been suspended for two games. Kevin Love, whose shoulder is healing, is out indefinitely. Personally, I don't think Olynyk intended any harm, they just got entangled. It is a shame for Love, as he was beginning to find his shooting groove.

It remains easy for an underdog-loving fan to root for the 60-win Atlanta Hawks because nobody thinks they’re going to win the East. I’ll continue to push for them. Games 3 and 4 in Brooklyn were ugly. Deron Williams had an insane Game 4 (7 of 11 from deep), probably motivated by Paul Pierce's smack talk. The Nets evened up the series with Atlanta, proving all the doubters wise. The Hawks are dealing with minor injuries to Horford and Millsap is probably around 80 percent. Losing Thabo Sefolosha (impending NYPD investigation of Thabo's broken leg suffered during an incident at a nightclub involving police) has been important. Thabo is a glue guy and a defensive stopper, perfectly suited to Joe Johnson, and capable of running Bogdanovic off the line better than Mike Scott. Thaddeus Young is entirely underrated. Young's defense and rebounding and Bogdan Bogdanovic with his three-point shooting have supplied just enough around Deron Williams and Brook Lopez to make the Nets look much better than their 38-44 record.

The 22-win difference between Atlanta and Brooklyn is kind of insane, when you think about it. Health contributes to the difference. Atlanta's laser-like regular season focus, health, and some good fortune, allowed them to win 8-10 more games than they probably should have. Brooklyn's lack of motivation, lack of locker room unity, and injuries probably cost them 5-10 wins. In reality, these teams are probably closer to a 4 vs. 5 match-up than the 1 vs. 8 that they appear.