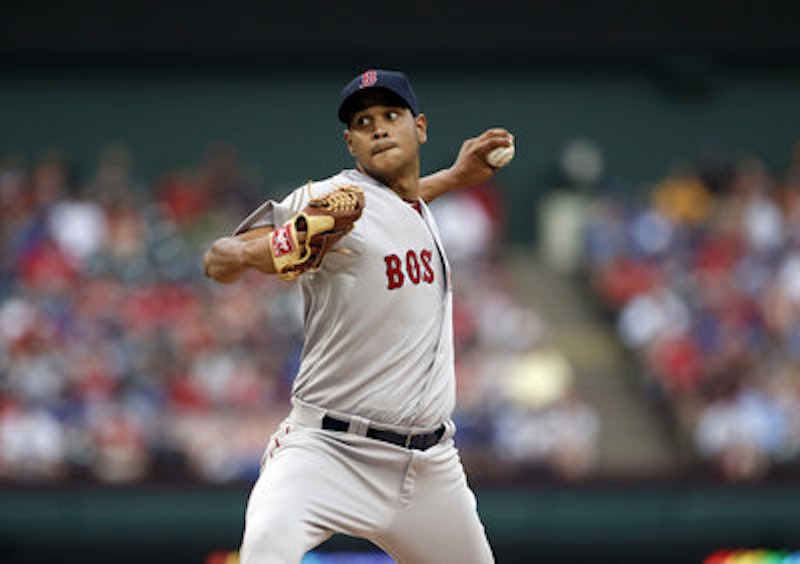 As of September 18, the top three run-scoring teams in baseball (Blue Jays, Yankees, and Red Sox) have combined to score exactly 2200 runs. The Orioles are currently eighth out of MLB's 30 teams. Combined, the four teams are averaging 4.9 runs per game. The Blue Jays are averaging over 5.5 runs per game, more than any team since the 2011 Yankees (5.65). In contrast, this year’s NL East's trio of Miami, Philadelphia and the Braves have combined to average a full-run fewer, at 3.69 per game. Consider that each team plays each divisional opponent 18 or 19 times in a given season. Nearly half of a team’s games.

Pitching in the NL East this year hasn’t been all that different from pitching against solid AA competition. Of those three NL East teams listed above, only Giancarlo Stanton (27 HR in 318 plate appearances before a broken wrist ended his season), and Freddie Freeman (.852 OPS but only 421 PAs) strike fear into opposing pitcher’s hearts. One can make a case that Christian Yelich has a bright future, but his .747 OPS has been disappointing. Dee Gordon sizzled in April, but his singles-only approach, without much plate discipline is what prompted the Dodgers to send him to South Beach last winter. The Phillies have Mikael Franco (36 extra-base hits in 326 PAs) as a future cleanup hitter and not much else. The Braves are currently batting A.J. Pierzynski at the cleanup spot. The only thing he needs to clean up is the mess that is the Braves rotation, outside of Shelby Miller. These facts all point to one thing: the NL East is a very forgiving division to pitch in. Even the elderly Bartolo Colon seems to be hanging on to a career thanks to the NL East. In the NL Central, the Cardinals, Cubs, and Pirates have all had great seasons, but those 90+ win totals are hugely inflated due to the level of their competition. Contrasting the quality of hitters and the pitcher-friendly parks of the NL East with their American League counterparts sheds light on the unbalanced competition in the two leagues this season.

As you’ll see below, an ERA under 3.50 for an AL East starter (outside of Tampa Bay’s Tropicana Field) is very rare these days, while an ERA under 3.00 for an NL starter is not nearly as dominant as it appears. The bottom half of the National League is as weak as it’s been in years. Teams such as Philadelphia, Miami, Atlanta, Milwaukee (especially post-deadline), and Cincinnati (Joey Votto is their only hope) are collectively punch-less.

In contrast, the Astros, Blue Jays, Royals and Twins are performing as well as they have in a decade. Some of this is cyclical. However, the gravitational pull of the AL East toward free-agent hitters isn’t going away. As the Red Sox develop young hitters, the Yankees remain the natural landing spot for former NL All-Stars, and Toronto is threatening to become the first team with three 35+ home run hitters in decades. For AL East teams, landing free-agent starting pitchers in the prime of their careers is costly. These contracts are often long-term deals, because top-level starters know they can dominate in the NL or AL West, and would be foolish to watch their ERAs inflate after years in the AL East, before entering back into free agency. The Yankees went to Japan for Tanaka. The Red Sox landed Wade Miley, Rick Porcello and Joe Kelly via trades. The Blue Jays went all-in and traded for David Price. Much of this year’s Red Sox criticism has been leveled at the lackluster pitching rotation. In reality, the three starters mentioned above have faced far better hitters than their NL brethren, which has resulted in some brutal outings.

Most fans have understood the National League to be the better pitcher’s league for as long as the DH has existed. Still, the disparity between the leagues is growing. Take a look at MLB’s ERA leaders and the number of starts they’ve made against the best (1st-3rd, the good (4th-18th), and the worst (19th-30th) performing lineups:

*ERC: Component ERA, based on number of hits & walks, instead of earned runs.

Five of MLB's best team ERAs belong to National League teams. The St. Louis Cardinals team ERA sits at a microscopic 2.90. At the end of August, it was even lower (2.65). To put that into perspective, no team since the 1989 Dodgers (2.95) has finished under 3.00. The 2011 Phillies (3.02) and 2014 Nationals (3.03) were the only two teams to come close in the post-steroid era. Furthering the mind-boggling dominance, the Cardinals are stifling opposing lineups without their ace, Adam Wainwright, who went down with an Achilles tear in April.

Only the Astros, behind left-handed ace Dallas Keuchel, benefit from playing against three pitcher-friendly AL West ballparks (Anaheim, Seattle and Oakland are HR-depleting parks). Combine major injuries to AL East pitching staffs (Buchholz, Pineda, Tanaka, Stroman), and playing a majority of games in Yankee Stadium, Camden Yards, Toronto’s Rogers Centre, and those lazy fly-ball doubles off the Green Monster, and you get lots and lots of runs.

Looking back on the season, Clay Buchholz should have printed "Survivor: Red Sox Edition" t-shirts, instead of those “He’s the Ace” shirts. Of Buchholz, Miley, Porcello, Justin Masterson, and Kelly, only Miley and Kelly have survived. Buchholz was lit up by the Yankees (as many starters have been this year) on April 12, giving up 9 ER in 3.1 innings. Removing that start, Buchholz actually performed like a legit ace, surrendering only 32 runs in 110 innings (2.62 ERA), to go with 107 Ks, only 23 walks, and only 6 home runs. Lost in the fog of this season is how dominant he’s been. Of course, his last start was July 10. As always, the fragility of Buchholz outweighs the confidence many have in his ability.

Rookie Eduardo Rodriguez was a rare provider of optimism-doses early in the season for the Red Sox. “I Heart Eduardo” t-shirts will be sold on Lansdowne St. one day. If I’d more gumption, I’d make them myself. Rodriguez’s ERA stands at 3.94 after his first 19 major league starts. When accounting for the competition, he’s had a truly spectacular rookie campaign. Of those 19 starts, five have been against either the Yankees or Blue Jays (two best offenses in the MLB this year), while only five have been against the bottom-third of MLB offenses. Were he pitching in the NL East, it would be fair to assume Rodriguez’s ERA would be closer to 3.00.

As you can see in the table above, each Red Sox starter has a higher ERA than ERC. The National League ERA leaders all have lower ERA than ERC. As ERC is based on hits and walks allowed, this shows that home run rates are dooming the AL East pitchers. Higher home run rates have killed all but Buchholz. However, with the lineups they face, and the parks they pitch in, those higher rates would be somewhat expected, which makes you wonder if AL East ERA’s will ever dip under 3.00 again. David Price’s 2.42 ERA is an exception. Price’s mastery of the AL East while in Tampa Bay was helped by the Tropicana Field effect, but he’s clearly one of the few starters in the majors capable of performing in the hothouse division. In the NL, David Price’s ERA would be so minuscule, it wouldn’t be large enough to appear on a printed page.

Red Sox starter Joe Kelly (2.46 ERA in 18.3 innings vs. NL, 5.18 ERA in 114 innings vs. AL) and Cardinals starter John Lackey are perfect examples of the disparity between pitching in the AL East compared with every other division). Lackey’s infamous 2011 with the Red Sox resulted in an ulcer-inducing 6.41 ERA and 203 hits allowed in 160 innings. Many Sox fans point to the Lackey for Kelly and Allen Craig deal as an example of former GM Ben Cherington’s awful decision-making. In reality, Kelly may turn out to be a more dominant pitcher than Lackey as soon as next year. Even after Kelly’s horrendous months of May and June (61 hits allowed in 50 IP, 6.00 ERA), he’s shown an ability to get ahead of hitters with his off-speed pitches and then attacking with his plus-fastball. Kelly has made 24 starts this season, with more than half coming against the top-12 offenses in baseball. Meanwhile, Lackey has faced an array of the NL’s worst lineups, matching up against above-average offenses in only seven of his 29 starts. With that in mind, is it surprising that Lackey owns a 2.89 ERA? He’s avoided the Yankees, Blue Jays, and Red Sox completely.

The questions for new Red Sox president of baseball operations Dave Dombrowski are many. Can Hanley Ramirez play first base? If so, does Travis Shaw become a part-time outfielder? What does Dustin Pedroia have left? Is Pablo Sandoval capable of bouncing back? If not, who will take that enormous contract?

With the rotation, the questions might even be more complex. How should we view the performances of Porcello, Miley, Kelly, and Rodriguez? There was talk of Porcello overthrowing early in the season, trying to live up to the contract by becoming more of a strikeout pitcher (and failing miserably). Kelly’s always had velocity and a nasty curveball, but his lack of command has been disastrous against quality competition. Miley has rounded into the third starter-type the Sox envisioned when they acquired him in February. Since May 1, Miley has generally pitched well. In his last eight starts, he’s posted a 46:7 strikeout-to-walk ratio, and limited batters to three homers in his last 55.2 innings. Not surprisingly, some of those starts have come against some of the lighter-hitting teams in the majors (Seattle, Philadelphia, and Tampa Bay).

As Dombrowski mentioned in a recent Q&A with the Boston Globe, one definitive weakness the front office must address is the bullpen. Boston’s bullpen ERA (4.48) is 26th, while the Red Sox bullpen opponent OPS (.790) is second-worst in the majors. Ironically, Dombrowski’s former club, Detroit, is the only team with an inferior bullpen. Not surprisingly in this era of dominant relievers, the top AL bullpens (Houston, KC, and Toronto) are also among the league’s best teams. Each of these three are holding opponents OPS to under .650.

One of the simple, yet constant, keys to making the postseason is winning a high percentage of games against weaker competition. The Atlanta Braves of the 1990s lived off the meat of the NL’s weakest. Beat the bad teams and you’ll win enough to make the October party. In today’s American League, this is easier said than done.

As of September 19, every American League team except for Oakland is on pace to win at least 76 games. Meanwhile, six NL franchises are currently on an under-70-win pace, with both the Braves and Phillies in danger of losing 100 games. The parity that MLB was hoping for when they switched to a wild-card game postseason format is working in the AL. On the flipside, the NL is looking more like the NBA’s Eastern Conference, where a few teams dominate, and the rest limp along until the season mercifully ends. The disparity between leagues may not be going away for a while, as the Phillies, Braves, Brewers and Reds all have too many issues to address in one offseason. Keep it in mind the next time you watch Eduardo Rodriguez toe the rubber. If he maintains his upward trajectory, he might see Cy Young votes in his future… if he were pitching in Miami.