Baltimore’s stuck with a bad contract. 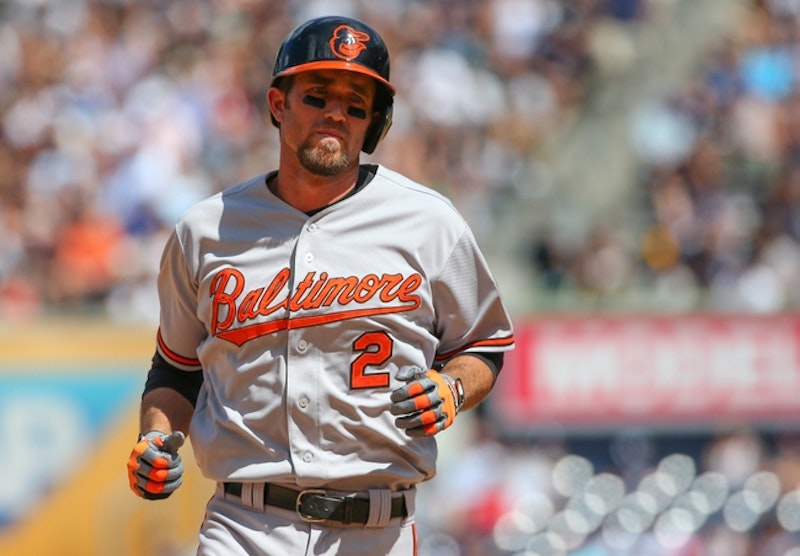 The Baltimore Orioles have had a modest resurgence over the past two weeks, after a disastrous three-week stretch that essentially ruined their 2015 season. Baltimore’s nadir came at the worst part of its schedule. Instead of surging past fellow Wild Card hopefuls like the Twins, Rangers and Angels, the Orioles bottomed out in head-to-head matchups. The team’s struggles strangely came while their most disappointing every day player, J.J. Hardy, was sidelined with an injury.

Baltimore signed shortstop Hardy to a three-year contract extension on the eve of last season’s American League Championship Series appearance. The contract includes an option that could keep Hardy in Baltimore through the 2018 season. Hardy’s contract, which will pay him at least $40 million, came after his third consecutive Gold Glove Award. Hardy’s never been a great offensive player but his production has cratered in 2015. In fact, Hardy’s been on a steady offensive decline since slugging 30 home runs in his first season with the Orioles in 2011. The 33-year-old has battled nagging injuries and back issues throughout this season and is hitting just .212.

The strange thing about Hardy’s decline is that the Orioles are somehow a much better team with him in the lineup. After spending much of the season battling for AL East supremacy the Orioles have dropped back to the pack. The team is 72-74 on the season. When Hardy, with his weakened bat and creaky back, is in the starting lineup the Orioles are 55-45. Baltimore is just 16-30 when Hardy is on the bench or disabled list.

Hardy’s most recent absence saw the Orioles go just 3-11 while he was replaced in Buck Showalter’s lineup by Paul Janish and Ryan Flaherty. O’s fans did finally get a glimpse of Manny Machado at shortstop, and he excelled, but Hardy’s long-term contract makes a permanent position swap unlikely. Hardy returned to the lineup last week against the Yankees. The Orioles have gone 7-2 since his return despite Hardy’s rather predictable 4-for-35 slump.

Hardy’s been a fan favorite in Baltimore since his acquisition. He solidified the middle of the Orioles’ infield after years of the team trotting out the likes of Deivi Cruz, Freddy Bynum and Luis Hernandez at shortstop. The contract extension the Orioles handed Hardy last October was out of character. Given Hardy’s continued offensive decline it appears that Dan Duquette committed the baseball sin of paying for past performance. Later, Duquette allowed Nick Markakis, Andrew Miller and Nelson Cruz to depart as free agents because he didn’t want those players on the payroll into their late 30s. In retrospect, Hardy’s extension looks like the worst deal.

The Orioles and Hardy are stuck with each other. The veteran shortstop is still a plus defender and his impact on the team’s 2015 record makes a strong case for his intangibles. The Orioles have to hope that an offseason to rest his troublesome back and nagging injuries allows Hardy to modestly contribute on offense next season. As Manny Machado approaches a massive payday in free agency following the 2018 season Orioles fans face the prospect of getting only brief glimpses of the wunderkind at his natural position. Machado will continue to dazzle at the hot corner as Hardy declines at shortstop.