A brief commiseration in 1989. 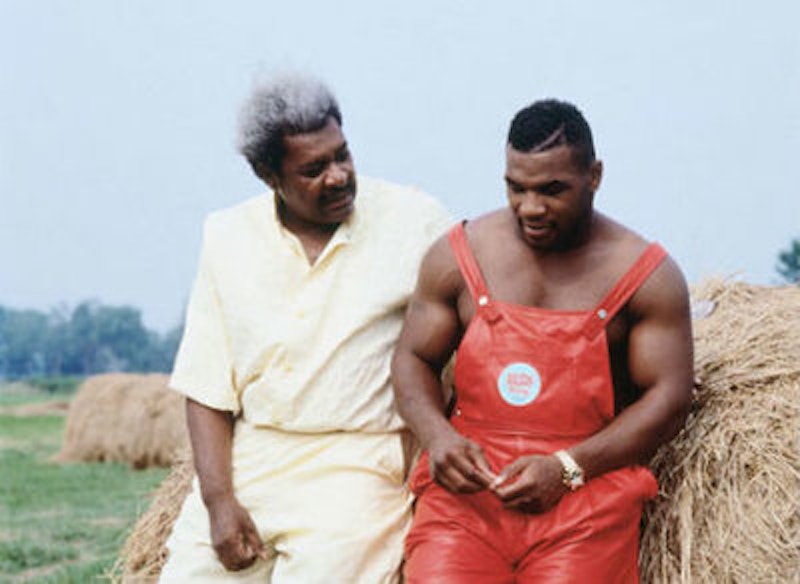 Nobody had seen Mike Tyson for an agonizing 45 minutes. But Don King quashed any talk of calling in the National Guard. “I’ll find him, since you all can’t,” boomed the flamboyant boxing promoter. “I know how he thinks. Give me an hour.” And so it was that King found the champ hunched over behind a hay bale, sobbing uncontrollably while attempting to dry his eyes with raw fistfuls of hay.

Tyson rose upon King’s approach, and the two men stood awkwardly avoiding one another’s eyes for a few moments until the former composed himself. Tyson leaned against the hay bale; after a moment, King joined him.

“What’s up, Mike?” King asked, after a time. “Why were you crying back there?”

Tyson stared off into the middle distance, idly wiping bits of hay from his face. “I bought a Maserati.”

“What color?” King studied a flock of birds.

“Teal,” Tyson whispered. “I got it for a great price.”

“Wait, you were crying because you bought a Maserati?” King shook his head, incredulous. “That’s not a legitimate reason to cry. If you’d said, ‘Don, I’m crying because I’m wearing red leather overalls without a shirt,’ I’d have bought that.”

“These overalls were a gift from Bobby Brown,” Tyson explained. “I’d just copped the Maserati and we celebrated with a shopping spree in Detroit. Bobby says this is the future,” he insisted, gesturing down at his outfit. “It doesn’t get any more fly than this.”

King studied Tyson warily. “So what is this all about? Wait—did you crash this expensive car, Mike? Did you and Bobby get drunk, hit a hitchhiking child, and then bury her in a gulch? Did y’all take turns with a crackwhore who had a heart attack in the car? Because that’s all I can figure, because heavyweight champs don’t cry, motherfucker!”

Yet Tyson was crying, again. King glanced at his watch; they’d have to leave for the airport in an hour. There’d be autograph seekers, groupies, press; an inconsolable champ was dicey, bad for business. I don’t need this bullshit, King thought. I don’t deserve this bullshit; I don’t get paid enough and I never see my family and this dude is crazy. Dear God, please don’t let anyone get this on camera—neither of us will ever live it down.

“It’s a beautiful car, Don,” Tyson sobbed. “It’s lovely. You should hear how the engine purrs. When I’m behind, strangers look at me like I’m somebody special. Bobby tried to buy the car from me but I wouldn’t sell, man, no fucking way. And I dropped Bobby off at home and went to a bombed-out McDonald’s and bought a shake, and sipped it while I tried and failed to figure out why this Maserati doesn’t make me happy.” Shocked, King felt tears welling up in his own eyes. “I’m empty, Don! Look at me. I’m not here. All the belts, all the plaudits, all the trim, all the sycophants, all the money—it doesn’t mean shit. If we don’t love and respect ourselves, success is groundless and ephemeral and meaningless.”

King nodded as he sobbed. He understood. How many late Vegas nights had he spent at overpriced buffets, pursuing an elusive self-actualization? How many tailored suits had failed to deliver the confidence others insisted he projected naturally? There were never enough hours in the day; he never felt that he packed enough Brylcreem to sustain his coif during public appearances. He was actually tired of private planes, of press conferences, of boxing.

“Mike,” King said softly. “We’d got an hour before the flight. You want to get some ice-cream?”