A rookie’s notes from the old-timers softball league. 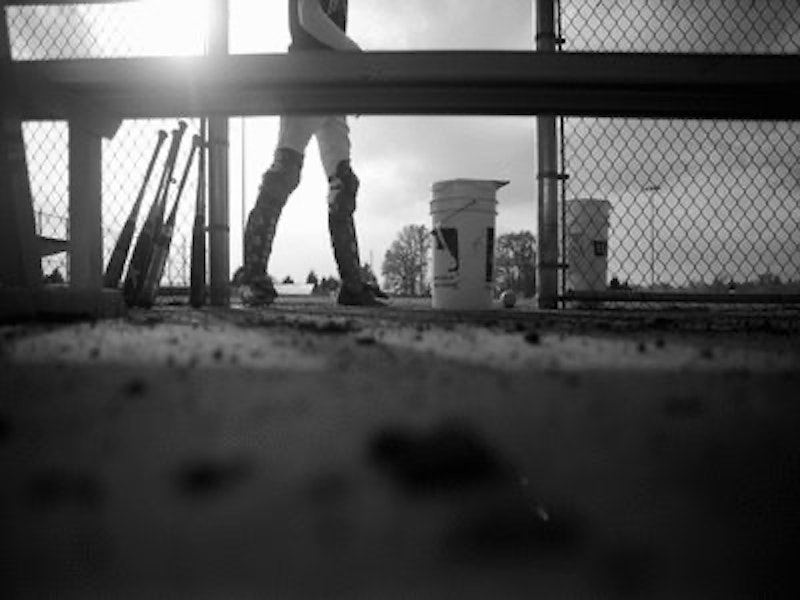 We got knocked out of the playoffs early in the St. Jude’s Old-Timers Softball League. A few days after the championship game (which I elected not to attend in favor of seeing my son off to college), every player was sent a chart with every player’s final stats. Sadly, these were offensive stats, to the exclusion of all else. (Nobody but me, it seems, cares about defense.) During the season I’d done my best to rid my mind of my batting numbers, but now they were here in writing for everyone in the league to see. Well, then, I simply wouldn’t look. I saw my name on the list of over 120 players, but I averted my eyes from the seemingly endless row of offensive categories next to my name. It was my batting average in particular that frightened me. I was truly afraid that I hadn’t even made it above the so-called Mendoza Line, named for the “all field, no hit” Mexican-born shortstop Mario Mendoza, who in limited action failed to hit above .200 in five of his nine major league seasons. I know this about him because I looked up his career statistics during my own hitting struggles with the St. Jude’s Old-Timers. The Mendoza Line was much on my mind. My heart went out to Mario in reading about his offensive travails and the coining of the term that now bears his name. In his native Mexico he was known as Manos de Seda, or Silk Hands, but thanks to a couple of gringo teammates during a stint with the Seattle Mariners, he was saddled forever with this other, most unkind, designation.

During my sessions with Dr. Abel, I related my fears again and again of hitting below the Mendoza Line. Dr. Abel is a sports psychologist with a practice in New England. We talk on the phone on a weekly basis—or did so until recently, when a broken finger ended my season prematurely. But while I was under his care, whenever I brought up my fear of hitting below .200, Dr. Abel would chuckle and say, “Howard, who’s counting?”

Well, I think we have our answer now. The league was counting every hit, every walk, every strikeout, you name it—and here it all was set down in writing like God’s own Book of Life, in which every person’s smallest deed, good and bad, is recorded for the ages. When my old public high school in California closed its doors a number of years ago, never to reopen, I secretly rejoiced for the most selfish of reasons. As a senior on the varsity baseball team, I finished with a batting average of .067. It pains me now even to write it. Not even Mario Mendoza’s lowest recorded batting average (.118) ever reached such a nadir. This blemish would follow me to the end of my days—or so I thought until I heard the joyous news of my high school’s dissolution.  With no more Serramonte there would be no trace left of my .067. If I ever ran for public office, or did anything of note in the public sphere, no snooping reporter would ever uncover this skeleton in my closet.

But now I had this new skeleton to deal with from the St. Jude’s Old-Timers Softball League. Was it possible that I finished with the league’s lowest batting average for the 2015 season? Impossible to say from a mere glance at the long list of player names running down the left-hand margin of the stats chart—this glance being all I allowed myself before hurriedly looking away.  Player names were grouped by team, and as my team was the second one listed, my name appeared fairly high on the page. Clearly, then, the player list was not arranged by batting average, with the highest on top and the lowest on the bottom.

A day went by, then three, then seven, and I didn’t once look at the chart again. Just the thought of it would cast me down, and I’d try to think of something else. But even when I did succeed in forgetting about it for half a day, I was still aware of a cloud hanging over me. “Why this cloud?” I’d ask myself—and then I’d remember that awful chart.

Karen marveled at my fortitude—or stubbornness—in refusing to know my batting average. “I could never not look at something that was as important to me as your batting average is to you,” she told me. “How do you do it?”

I explained that it was like knowing some enemy of mine had said something cruel about me to one of my friends. I could ask this friend to repeat the aspersion, but experience had taught me I was better off not hearing it.

And then last night we were having dinner at an Italian restaurant in New York with an old bachelor friend named Lee, a long-since tenured English professor with a prominent brow and deep-set eyes who knew the late poet Galway Kinnell, about whom he’d written a full-length book. He’s also a long-time baseball fan who prides himself on his knowledge of the game and the finer points of sabermetrics. I hadn’t seen him in almost a year, and as the three of us huddled at our darkened table lit by only a candle stump, I filled him in on my shortened season out in New Jersey with the St. Jude’s Old-Timers. That awful stat chart was still on my mind, and by the end I found myself complaining to Lee that the league had made no effort to keep track of defensive stats; that all us glove-men had gotten short shrift.

Lee, who sat across from us, shifted uneasily. In the dark it was hard to see his eyes in their deep sockets. “With all due respect to your prowess in the field,” he said, “defensive statistics can be misleading at times. If you make like a statue and never touch the ball, the records will say you never committed an error. Does that mean you’re a good fielder? Defensive stats really need to be looked at over a two-year period.”

Before he could ask about my batting average, on-base percentage, slugging percentage, and all the rest of it, I told him flat out that I hadn’t looked and had no intention of looking for a good long while, if ever. “To tell you the truth,” I said, “I’m not sure I made it over the Mendoza Line, and if that’s the case I don’t want to know.”

At this point Karen, who was on my right, quietly interjected a question. “What if you didn’t do as badly as you think you did?”

Something in her tone made me suspect this was not a mere academic formulation. I whipped around. “Do you know something I don’t know?”

She answered with a noncommittal shrug of the shoulders.

“I did,” she said meekly, ducking her head between her shoulders. “And I don’t think you did as badly as you think you did,” she added hastily. “I think you actually batted over .300.”

“I think so. You’re certainly not the lowest on the list. I wasn’t going to say anything, but wouldn’t you feel better if you knew your batting average was over .300?”

On the train home to Summit, I asked Karen if she’d noticed how many hits I’d been credited with, according to the chart.

“I don’t know that I looked,” she said. “And if I did see your hit total, I don’t remember it now.” Her slightly exasperated tone seemed to suggest that, while she may have peeked at my batting average, it’s not as if she had sniffed out every last detail. Really, she wasn’t such a snoop as all that.

On the train sometimes, when I see a married couple squeezed together conversing in low voices, I find myself wondering what they’re talking about. In our train car on this night we were one of those squeezed-together married couples conversing in low voices, and it occurred to me now that none of the nearby passengers—in case they were wondering—would ever guess the particulars of our own tête-à-tête, the husband jabbering on about some kind of chart.

Once back home, alone with the chart, I found my name on the margin again and this time scanned across the page with its 25 offensive columns—from “GP” (games played) to “QAB%” (quality at-bats percentage)—until I reached the one labeled “AVG” at the top. I gasped with delight when I saw the figure—0.333. Karen was right, then. True, among my teammates, whose averages I now examined, mine was tied for lowest with six-foot-four-inch Captain Joe Sheehan’s. So what if he was 70 years old and ran like a stork on his stiff, long legs? So what if six of our players batted over .500? At least I wasn’t one of the two players in the league who hit below the Mendoza Line. I wasn’t even among the nine who batted in the .200’s. And of course I was nowhere near my own low-water mark of .067 at Serramonte High.

I have to admit I was surprised to the point of consternation by the high number credited to me in the hits column. In my own mind I had this number as nine, but according to the chart it was 14. Fourteen hits in 42 at-bats. Somehow I’d been handed five extra hits, and then it dawned on me that the five instances in which, as I thought, I’d reached base on an error, had been ruled hits by the official scorer. Sure enough, in my “ROE” column (reached on error), the figure listed was zero. And lest I think this a kindness shown only to me as a rookie, not one player in the entire league had above a “2” in this column—and “2” was a rarity. Most were down for 0 or 1. It was a league-wide amnesty. Everyone’s batting average, not just mine, was inflated—maybe even grossly inflated.