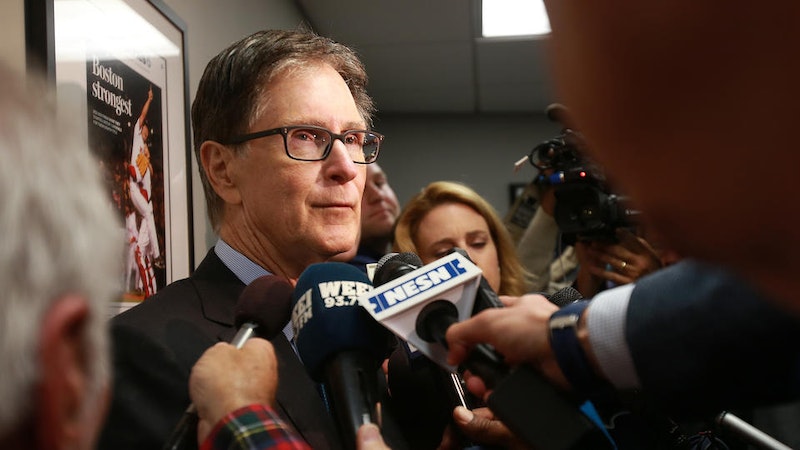 John Henry is a drama hag. He’s not the objective, statistically devoted businessman of Feeding the Monster, and he’s not the forward-thinking, against-the-grain owner of Moneyball. He’s by turns impatient and petulant, by others tragically loyal. Most of all, he’s easily influenced. He’s not the stone-faced statue symbolizing the scientific approach of Red Sox Nation—proclaiming in bronze letters: Give me your pot-bellied, your height-challenged, your inexplicable OBP machines—he’s Silly Putty: easily manipulated, distortable, trapped in the past.

Henry replaced former GM Ben Cherington (it was about time!) with front office veteran—and recently ousted Detroit GM—Dave Dombrowski. Most sportswriters labeled this move a “change in philosophy”—a shift from analytics to old-fashioned, feel-it-in-your-gut scouting—but I call it a regression, a rash step backwards as the result of unnecessary invariability. Cherington’s brand of stat-based team engineering didn’t work—which, hey, I told you in 2014—so what’s the logical response: find a new saber-oriented mind, maybe one who’s a little less risk-averse, one who will take action; or, ditch your long-held organizational philosophy—which, c’mon, has been pretty successful over the last decade—and hope for the best? Dombrowski’s hiring, of course, was announced mid-season, because what’s a year in Red Sox Nation without a few sudden, dramatic upheavals?

The arrival of Dombrowski isn’t the ominous storm cloud that a few radicals will have you believe—he’s a smart dude, by all accounts, adept at engineering a winning team with an exorbitant budget (which, historically speaking, isn’t that difficult. It’s the true mid-market GM’s—Cincinnati, Milwaukee, San Diego, Minnesota—that get screwed: they have just enough money to be pressured into a signing a few mid-level free agents every couple years, which, ultimately, become immovable albatrosses). Henry’s not trashing his Moneyball-ethos, either. Contrary to popular misinterpretation, Moneyball-philosophy does not center on acquiring slow, patient hitters—it revolves around the idea of inefficiency exploitation, of taking what’s undervalued and using it to your full advantage. The thing is, though, old-fashioned scouting is not widely out-of-favor; it’s not a league-wide inefficiency begging to be exploited. The Mets, Twins, Braves, and Diamondbacks are all vocal about their reliance on scouting over analytics. Henry used to be in touch with the zeitgeist, but after the Cherington misstep, instead of hiring a like-minded GM (a la Theo Epstein), he’s hiding behind old-school baseball, using tradition as a cover for cowardice.

Maybe the Dombrowski addition was a smart business move—billing the front office overhaul as a rejuvenation, of sorts, a means of exciting fans after two straight last-place finishes—but it isn’t a smart baseball move. If anything, the 2015 season has proven that Henry’s baseball acumen has steadily diminished over the last 10 years. He can grab a headline, and that’s about it.