A bum year for those gearing up for the season. 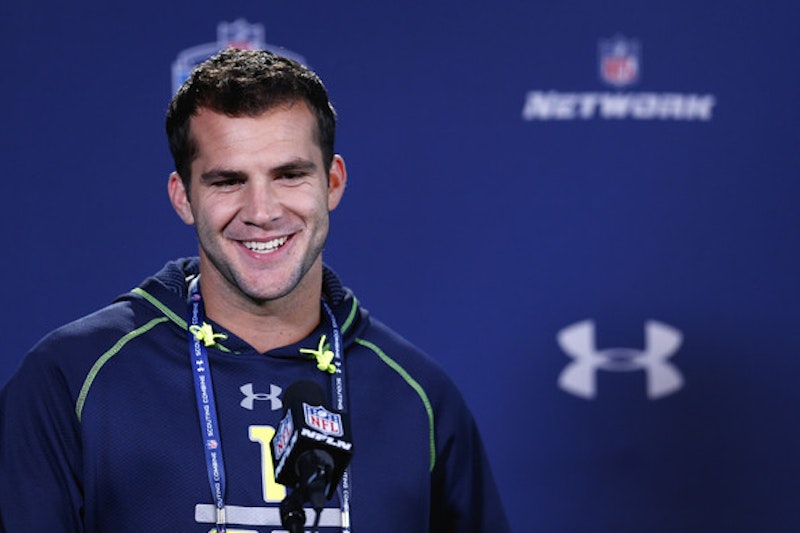 There was a time when the NFL Draft was one of my favorite sporting events. A friend and I would clear an entire April Saturday to consume the draft, along with vast amounts of salty snacks and pit beef. Those days are gone as Roger Goodell and company have made the draft a primetime television spectacular and spread the process out to an agonizing three days.

The NFL conducted the 2014 draft last week and I didn’t watch more than five minutes of it. I did check out the round results to see which, if any, offensive prospects would have the opportunity to make an impact next season. Round after round I came away wholly unimpressed.

The Jaguars wasted the third overall pick on another quarterback in Blake Bortles, just a few months after mercilessly pulling the plug on the Blaine Gabbert experience. Bortles will likely sit for a season but, given the Jags’ history and roster, the youngster has little chance to succeed in the near future.

The Vikings traded back into the first round to select Louisville QB Teddy Bridgewater. It was only a few months ago that Bridgewater was a candidate to be the draft’s top pick. After slipping in the draft Bridgewater will have the benefit of being coached by Norv Turner and playing behind veteran Matt Cassel for a season.

The Browns selected Texas A&M QB Johnny Manziel late in the first round. Manziel entered the draft as one of the most intriguing offensive prospects with the ability to make an immediate impact in the right situation. Cleveland isn’t the right situation for Manziel. Cleveland hasn’t been the right situation for anyone. In classic Browns’ one-step-forward-one-step-back fashion star WR Josh Gordon was suspended for the 2014 season over the weekend. In a matter of hours Manziel went from Offensive Rookie of the Year frontrunner to future ex-Cleveland Brown.

Cleveland did benefit from the Buffalo Bills continued incompetence. Buffalo traded its 2014 and 2015 first round picks to Cleveland to move up five spots in the draft to select Clemson WR Sammy Watkins. The Bills landed the draft’s top WR prospect in Watkins, but the cost was prohibitive for a team that hasn’t won a playoff game since December of 1995. The Bills followed up the Watkins selection with a head-scratching trade when they dealt top WR Stevie Johnson to the 49ers for a fourth round selection in next year’s draft. Watkins goes into his rookie season with Buffalo as the top receiver on the depth chart with an unproven QB under center. Watkins will be hard pressed to make the Bills’ gamble worthwhile.

Fantasy owners that typically drool at the prospect of adding a rookie running back may be disappointed come August. The first running back off the draft board was Washington tailback Bishop Sankey, who was selected in the second round by the Titans. Sankey will get the opportunity to replace the recently released Chris Johnson. Shonn Greene is the only man standing between Sankey and a starting job in the NFL. Beyond Sankey there isn’t a single rookie running back that figures to have the chance to earn a starting role. Jeremy Hill of the Bengals and Terrance West of the Browns should get a fair amount of action in reserve roles but, barring injury, neither will be worthy of an early round fantasy selection.

Rookie wide receivers have traditionally disappointed but the 2014 crop may have the best chance for immediate fantasy relevance. Watkins will get plenty of snaps in Buffalo, Odell Beckham could play early and often for the Giants, and Kelvin Benjamin will likely be a starter by default for the depleted Panthers. Mike Adams, Manziel’s A&M running mate, was selected seventh overall by the Bucs. Adams, a big target who has the benefit of playing with a veteran QB, may be the only rookie worth a spot in your weekly fantasy lineup.