The Surprising Cincy Reds Will Fall Short in October

It's all about the pitching... or lack thereof. 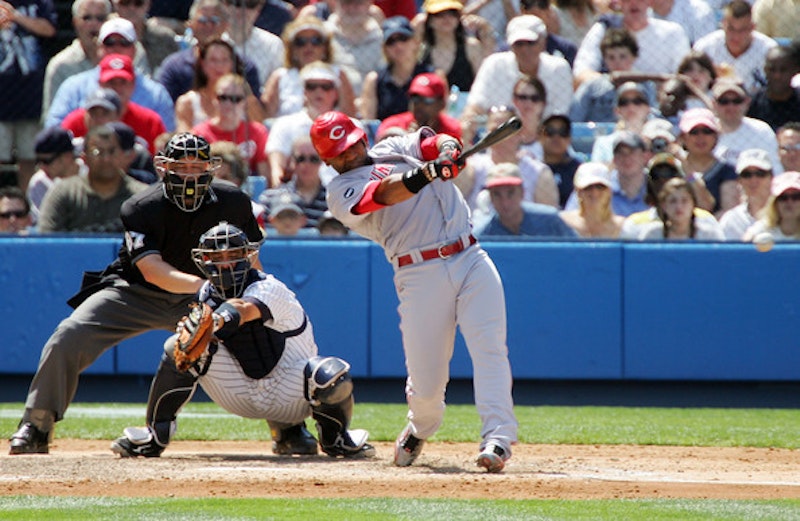 I was a Cincinnati Reds fan as a kid. I loved the all-around ability of Eric Davis and Barry Larkin. I rooted hard and loud for the 1990 team led by Lou Piniella and The Nasty Boys against the Big Bad Juiced Up Oakland A's. The Reds haven't been competitive or relevant for most of the past 14 years but the 2010 team is a high-powered offensive juggernaut that has run away with the NL Central.

The Reds, along with the Padres, are one of the best stories of this baseball season. They feature a baseball lifer at manager in Dusty Baker. After flaming out with the Cubs, Baker has exacted his revenge to the tune of a 12-4 record vs. Chicago this season. Joey Votto is the young superstar who leads the offense with his video game-like production. Given the Reds’ huge lead over the Cardinals in the NL Central, Votto is the likely NL MVP; unless Carlos Gonzalez and the Rockies come through with another September to remember.

The Reds also have some promising youngsters on the pitching staff, led by starters Johnny Cueto, Mike Leake and Travis Wood, who have combined to go 25-12 this season. Red Sox castoff Bronson Arroyo joins Aaron Harang to round out the starting five. The Reds have also reaped the rewards from giving second chances to former top prospects Brandon Phillips and Jonny Gomes, who are two of the team's best offensive contributors.

As of Sept. 17, The Reds have scored 719 runs, a huge sum for an NL team. In fact, the Reds would rank fourth in the AL in scoring behind only New York, Tampa Bay and Boston. Much like the Phillies of recent Octobers, Cincy can bash like an AL team. However, a closer look at the Reds’ record provides some cause for concern. The Reds are 20 games over .500, but they have a combined record of 36-13 against NL Central teams other than the Cardinals. The team is just 6-12 head-to-head against the Cards and their superior pitching staff this season.

Once the playoffs begin the Reds will face a lot of pitching that resembles the Cardinals more than that of the Cubs, Astros and Pirates. In key playoff matchups it's likely that opponents will simply pitch around Votto and take their chances with Gomes, Scott Rolen and Jay Bruce. I don't think the Reds have the pitching to succeed in October. Arroyo or Cueto will likely be the team's number one starter in a short series and neither matches up favorably with possible opponents Roy Halladay, Tim Hudson, Tim Lincecum or Mat Latos.

It only goes downhill from there, as Cincinnati would have to rely heavily on the tired arms of rookies Leake and Wood. The Reds do have an X-factor in Aroldis Chapman, the Cuban defector with the 104 MPH fastball. I'd love to see Chapman battle sluggers Ryan Howard or Chase Utley in a meaningful playoff matchup. I'll root for the Reds for the sake of nostalgia, and the entertainment factor of young stars like Chapman and Votto. But I’m afraid the team is going to fall short next month.