For one thing, enough about the Texans already. 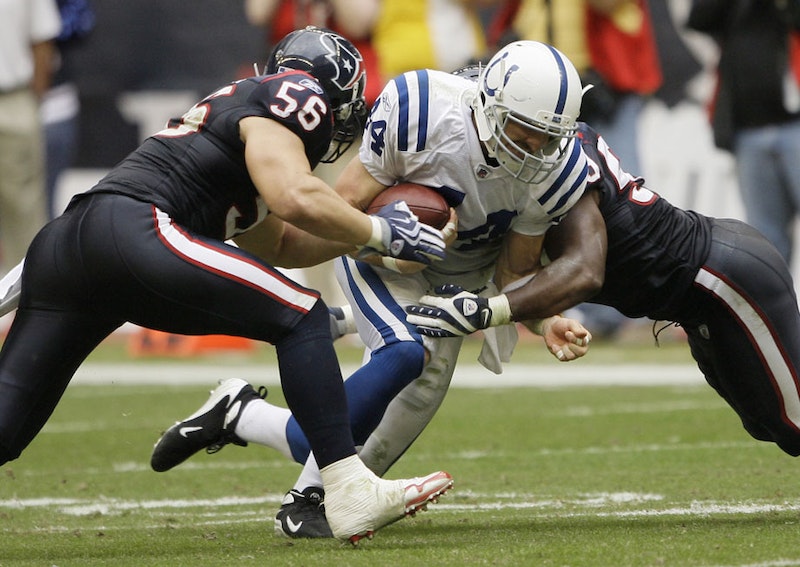 I don’t particularly like preseason Power Rankings. They’re kind of silly and too similar to be of any real interest. If you compare the online ESPN, Sports Illustrated and Fox Sports power rankings they’re essentially a mirror image of one another. Instead, here are some predictions for a few things I think are likely to happen in this NFL season. Keep in mind that I didn’t tour dozens of training camps in a pimped out Winnie. I haven’t watched countless hours of game film from the 2009 season. The following are based on nothing more than my own gut feeling and some common sense.

1. The Denver Broncos are going to stink. I don’t mean “early-Bucs with the gay pirate tangerine uniforms” stink, but they’ll be lucky to win six games. This is by no means an indictment of gay pirates. Denver will finish behind the Raiders and battle the Chiefs for last place in the ultra-weak AFC West. No Dumervil and no Brandon Marshall will make for a long fall in Denver. Tim Tebow may turn water into wine but he won’t turn the Broncos into contenders.

2. The Bears are awful. Yeah, I know they brought in Mike Martz as offensive coordinator. I also know that Jay Cutler makes throws and asks questions later. Cutler will get crushed in this wide-open offense and miss at least parts of three games to injury. In this soft real estate market Lovie Smith may want to go ahead and put his Chicago residence on the market now, unless he thinks he has a shot at the Cubs job. Julius Peppers got his big payday but he may be pulling an Albert Haynesworth this time next year.

3. The Lions are awful, but entertaining. Jahvid Best will be the offensive Rookie of the Year and the Calvin Johnson/Matthew Stafford combo will put points on the board. They won’t make the playoffs but the Lions will be fun to watch and they’ll win more than the Bears.

4. I’m still not buying the Texans. They’ve been “on the verge” for about four years now. The team’s not terrible but they won’t make the playoffs.

5. The Steelers are in for a long season. Losing Big Ben for four ga mes definitely hurts, but the absence of Santonio Holmes is worse. Holmes is a #1 WR with size and speed. Those guys are rare and the Steelers just gave him away to the Jets. Frankly, the Steelers should be thrilled to go 8-8 this year. I’ll be thrilled if they go 4-12.

6. The Jets will go 9-7 and miss the playoffs. Rex Ryan will stop yapping long enough to drown his sorrows in a 14-pound cheesecake. Let’s hope “Revis Island” isn’t clothing optional.

7. Max Hall, the undrafted rookie from BYU, will be the Cardinals’ starting QB by mid-season. Incidentally, doesn’t Max Hall sound like a phony name? I’m not saying it is, but it sure sounds made up.

8. The Miami Dolphins will make the playoffs. Chad Henne will establish himself as the long-term answer at QB.

9. Bengals rookie WR Jordan Shipley will have a better season than Terrell Owens.

10. The Raiders will battle the Chargers for the AFC West title, ultimately finishing second and missing the playoffs. The disappointment known as Darren McFadden will total 1500 yards of offense.