Come on people! Go home, kiss your wife, get to know your kids again! 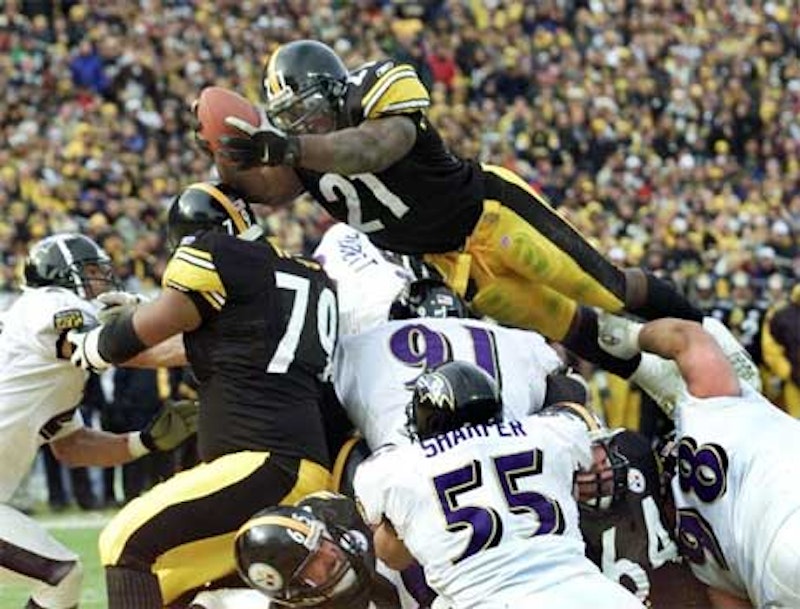 I'm a huge Ravens fan. I grew up listening to sports talk radio in Baltimore and got my hopes up every time some team (Cardinals, Rams, Saints, etc.) hinted at moving to the city. I've spent my entire life regaled with stories of the legendary, flawless Baltimore Colts by my father and uncle at every family gathering. I took my three-year-old son to his first Ravens game in Week 4 of the preseason. I'm Baltimore through and through and love the Ravens not only for their on-field product but also for the way they can collectively uplift the spirits of the entire community.

Unfortunately, it's not all puppy dogs in pro sports. Sometimes your favorite team is going to lose. Sometimes the opponent is simply better. Sadly, last Sunday was one of those days for the Ravens. It happens. They were outplayed by the Cincinnati Bengals and rightfully lost by the score of 15-10. They'll likely lose another three or four games before the season is over. Quite simply, Sunday's loss doesn't matter. The guy in the purple camo who's preparing to hurl himself off the Key Bridge doesn't want to hear that.

I get it. The Orioles have sucked since Felix Pie was a toddler. The Ravens come along each fall full of promise and looking to deliver Baltimore from its summer sports slumber. It didn't help when national publications picked the Ravens to represent the AFC in the Super Bowl. The hype and hope that existed just three days ago have turned to hysteria. Callers into sports talk shows are calling for Joe Flacco to be benched in favor of Marc Bulger. Really? You do know that Bulger's Rams went 1-15 last year right? Some want Offensive Coordinator Cam Cameron's head on a platter. One caller I heard yesterday even suggested that QB Coach Jim Zorn was at fault for the loss and should be canned.

Frankly, I'm exhausted by it. It's one game. Last time I checked the Bengals have won eight straight AFC North divisional games. We can want them to be the Bungles until we're purple in the face, but the record tells us they're a damn good team. Even with the loss the Ravens are 1-1 after starting the season with two road games against opponents that made the playoffs last year. In fact, I'll bet if in July I’d said the Ravens would be 1-1 after week 2 most fans would have been happy.

When did football go from entertainment to a matter of life and death? I root as hard as the next guy but when the game is over there’s nothing I can do to change it. That's why the coaches and players get paid ungodly sums of money. They're more qualified than me. Cam Cameron can stay up until three a.m. every night this week trying to “fix” what's wrong while I sleep soundly. I'll throw my Ed Reed jersey on at one p.m. on Sunday and hope for the best.

That doesn't make me any less of a fan. I simply have more important things to worry about. Maybe it's a matter of life stages. I have a wife and two kids, a fulltime job, teach as an adjunct, and write this column. I didn't even mention the daily stresses of managing my two fantasy football teams. Sports are a diversion for me. I can watch a ballgame while reading a book and let the stress of my day drift away.

There's a fine line between fan and fanatic. The NFL needs both groups to continue to thrive financially. If watching the Ravens is giving you an ulcer you may want to find another outlet. Ride a bike. Read a book. Take a walk. Put down the bobblehead and step away from the TV.

The NFL scheduling gods have served up the lowly Cleveland Browns as a feast for the Ravens home opener on Sunday. The Ravens will paste the Browns, most likely winning by whatever score they deem appropriate. Baltimoreans will sport smiles and proudly display their purple until they turn their attention to the Week 4 matchup against the hated Steelers.  If the Ravens lose to Pittsburgh we'll have another week of impending Armageddon. If they win people will be booking hotel rooms in Dallas for the Super Bowl. It's the nature of the NFL. They've sucked us in, but in the end, it’s just a game.