When a baseball fan’s team falls out of playoff contention, all attention is given to rooting against the New York Yankees. 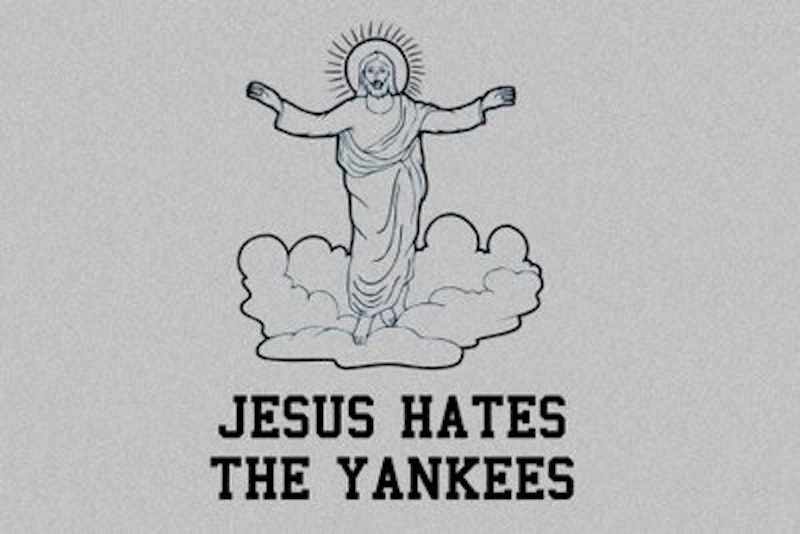 A long time ago, when teenagers (at least those with any smarts or crummy handwriting) were taking Typing Class as sixth- or seventh-graders, there was an exercise that everyone pecked out in the introductory sessions: “These are the times that try men’s souls.” I’ve been reminded of this in the past month—granted, on a lighter level than Paine’s famous words—as my longtime favorite baseball team, the Boston Red Sox, slipped out of contention for the postseason, due in part to a once-in-a-decade skein of injuries, but mostly because the 2010 team just isn’t as good, even when healthy, as the New York Yankees and Tampa Bay Rays.

Once a Sox fan comes to peace with reality—despite the occasional August tease of a 2007/10 Colorado Rockies impossible surge, and those hopes were dashed earlier this month upon being swept by the White Sox—he or she can exhale, not tense up at game time, and actually enjoy the pennant races and upcoming playoffs. It’s a wistful liberation—and new to younger Sox fans like my son Booker, since this will be just the second time since ’02 the Sox aren’t playing meaningful games in October—and there’s plenty to chew on. For example, I’ve taken pleasure in seeing the San Diego Padres blow a huge N.L. West lead down the stretch, and hope they miss the playoffs, mostly because they’re so incredibly boring. I don’t buy into the Bobby Cox hype that’s surrounding his last year as the Braves’ skipper—yes, he led the team to 14 straight division titles, but won the World Series just once, which is the definition of a choke artist in my book—but I’d like to see Atlanta best the Phillies for the N.L. East title this year. Don’t know why, really, since Jimmy Rollins, Chase Utley, Shane Victorino and Roy Halladay are a-okay with me; maybe it’s just because GM Ruben Amaro Jr. makes Nevada Senate candidate Sharron Angle seem like Margaret Thatcher.

I don’t generally follow National League teams, but the long-dormant Reds caught my attention in mid-season, with players like MVP candidate Joey Votto, Drew Stubbs, trash-talking Brandon Phillips, Johnny Cueto, Jay Bruce, Mike Leake, Homer Bailey, Edison Volquez, snarly Scott Rolen and now Tommy John surgery-waiting-to-happen reliever Aroldis Chapman dazzling fans with his 100+ fastball. Besides, I’ve always like ex-Sox Bronson Arroyo, an above-average starter who’s carved out a lucrative career while maintaining his laid-back latter-day hippy lifestyle. The Sox got burned trading him for where-is-he-know Willy Mo Pena a few years ago, and I still chuckle remembering when Arroyo would take the mound at Fenway Park in cornrows just because he thought it was a cool look. He doesn’t have the stuff of Tim Lincecum, but both guys (perhaps along with Zen-master Barry Zito) have flash and wit, recalling the great Bill Lee; white players who, unlike so many other Caucasian big leaguers, aren’t deadly dull rednecks. Form the line behind Chipper Jones, please.

Honesty counts though, and so despite this gauzy expression of gratitude for the great American pastime, there really is only one thing that I’m rooting for between now and the end of the October: that the Yankees don’t win a second consecutive World Series. I don’t mind at all being part of the massive anti-Bombers crowd—living in Lower Manhattan in the 1990s when the Yanks fouled the streets four times with their victory parades was an emphatic punctuation mark on my longtime hatred for the team—and so I’ve spent idle hours wondering what team has the best chance of knocking off the Yanks. Sorry, N.L. partisans, but the team won’t come from your league: by my reckoning, the best hope lies first in the Rays and then the Texas Rangers.

Here’s the good news (at least from my perspective): The truth in today’s MLB era is that it’s difficult for even the swiftest baseball salmon making it all the way upstream without the peril of a lumbering grizzly being in the right place at the right team. This wasn’t always the case, such as when the Yanks dominated the 1950s, using the Kansas City Athletics as their farm team, but winning 11 playoff games is no small feat. On paper, the Yanks, simply because of their explosive and patient offense, are the favorites. Their pitching is blessedly suspect—after CC Sabathia, it’s thin—but even the Rays’ extraordinary David Price will have difficulty containing Robinson Cano, A-Rod, Mark Teixeira, Curtis Granderson, Nick Swisher, Jorge Posada, Brett Gardner and even over-the-hill plugs like Marcus Thames and Lance Berkman. And though Derek Jeter is having an off-season—at the worst time, since he’s in a contract year and is expecting blood money for his past heroics, maybe an outrageous $25 million a year—he usually feasts on October pitching.

Another conundrum as the season winds up: if the Yanks win the A.L. East, they’ll match up with the Rangers in the ALDS, while the wild card Rays would draw the rollover Minnesota Twins. So it’s head vs. heart—I can’t root for New York to take the division, but it’s a virtual guarantee the Twinkies will impersonate the Pirates or Royals against the Yanks. Eight years ago, when the Bosox were trailing the Angels in the wild card standings, my sons and I went to a Yanks/Halos game at Yankee Stadium, sitting in my nephew’s primo box seats just behind the New York dugout. We needed the Angels to lose, and intended to root for New York, but after one inning it was just too weird and we left.

My hope is that the Rays—who’ll lose catalyst Carl Crawford, closer Rafael Soriano and Carlos Pena to free agency after the season—can rise to the occasion and whomp the Yanks with a combination of speed, clutch hits and pitching. And then advance to the Series and take on the Reds, a match-up that’ll cause Baseball Commissioner Bud Selig real tsouris because the television ratings will stink with two small-market teams. That would be a fun World Series to watch, and would help take the sting out the Red Sox’s lost season.