The Spectacular Hypocrisy Of LeBron James

A shill for China pretends to be a warrior for social justice. 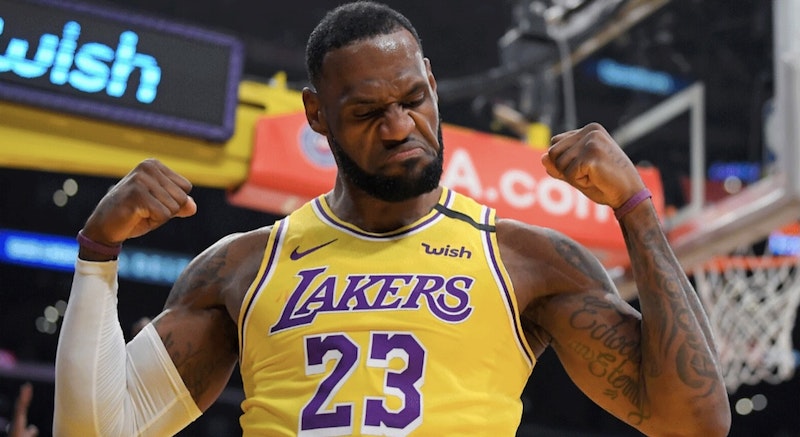 Last week, Swedish soccer superstar Zlatan Ibrahimović said that athletes like LeBron James should "stick to what they're good at, and leave politics to politicians." While it's idiotic to think we should leave politics to politicians, a less self-important person would've just ignored this foolishness instead of responding and coming off as phony once again. LBJ, whose ego blinds him from self-awareness, took the bait. "There’s no way I would ever just stick to sports," said the hoops star, "because I understand how powerful this platform and my voice is." "I would never shut up about things that's [sic] wrong," he added.

Really—never? Rights groups have estimated that the Chinese government that helps to line LeBron's pockets has detained more than a million Uighur Muslims over the past few years in what it calls "re-education camps," which is "wrong," but the NBA forward hasn't used his powerful platform and voice to say a word about a situation that the U.S. State Department has characterized as "genocide."

James has a business connection to China, which is why he shirks his responsibility to speak out against that nation's brutality to its minority group. Remaining silent on the issue would be bad enough, but he's done worse. When Houston Rockets general manager Daryl Morey tweeted in 2019 in support of the protesters in Hong Kong, James said that Morey was "either misinformed or not really educated on the situation." The implication's that the basketball player is educated on the situation in the former British colony, which somehow led him to support the Chinese government in its oppression of a group that it had previously promised a substantial degree of autonomy from Beijing. Maybe James called Xi Jinping to get "educated" on this topic.

In the press conference that James used to address Ibrahimović's criticism of him, he said, "I speak from a very educated mind," and, "I'm the wrong guy to go at because I do my homework." The pomposity is overwhelming. James works the annoying "I'm educated" angle, but he missed his homework assignment on all the evidence of Uighurs being used as forced labor and Uighur women being sterilized against their will. Such ethical lapses can happen when China helps pay your sky-high salary. I'm confident he'd at least comment if, say, Japan were doing this, but Japan doesn't have 500 million NBA fans like China.

In the same press conference, James said that he speaks out against racism and social injustice, but he's careful to say that he limits this to his "own community," which is how he dances around his silence on all the people that the Chinese government oppresses. Oppressed people all over the world are part of a single "community"; you either support all of them or you don't. As for the "powerful platform" he speaks of, imagine what could happen if James were to use his power to speak out against the racism and social injustice of China's treatment of its Muslim population, which is much worse than the treatment his own community gets in this country. He got paid $37 million in salary alone last year, so it would hardly be too much to ask of him. It could, however, put a damper on his close, lucrative relationship with Disney.

I prefer Michael Jordan's agnostic stance on politics, for which white progressives gave him heat, because they know how black people are supposed to behave. MJ stayed out of that arena when he was in the NBA, which at least means that he wasn't a hypocrite like James. Jordan was as concerned with his bank account as LBJ is, but at least he didn't criticize an NBA exec for standing up for the people of Hong Kong. James also gets compared to Muhammed Ali, but Ali sacrificed three years in the prime of his career for his beliefs; LBJ's not even willing to sacrifice his royalty payment on a single one of his jerseys in China.

Too many people for many years have told James, who's achieved sainthood status amongst progressives, that his every syllable is profound. The result is a bloated sense of self-regard that makes him seem more like a politician trying to burnish his image than someone with deep beliefs. When his L.A. home was allegedly vandalized with racially-offensive graffiti (no photos of the criminal act have ever surfaced, nor have any independent witnesses corroborated the story), James compared himself to Emmett Till. Try to imagine Ali comparing himself to a 14-year-old black kid who got tortured and lynched in 1955 because he'd supposedly offended a white woman. Only a pampered multimillionaire drunk on his own narcissism would make that offensive analogy.