A Conversation With Manny Delcarmen

The former MLB pitcher, and Boston native, is giving back to the city. 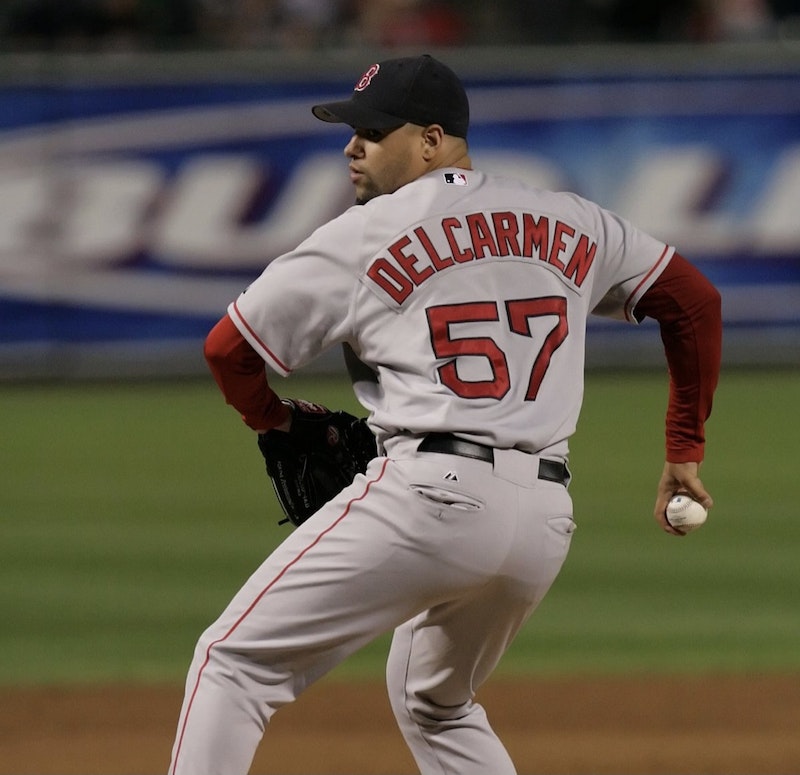 Manny Delcarmen holds a unique place in Boston Red Sox history. He grew up in Boston, attended Boston public schools, the Red Sox picked him in the second round of the 2000 MLB Draft, and the righty, who played for them from 2005 to 2010, was a part of their 2007 World Series championship-winning team. I spoke with Delcarmen last week.

Splice Today: You were one of the hardest throwing pitchers in baseball in your day. Pitch F/X tracked you throwing over 100 miles per hour multiple times. What do you credit that velocity to?

Manny Delcarmen: Coming up through the minors I was a starter and threw 92-95. Then I got Tommy John surgery in 2003. The rehab I put into my elbow down in Florida, not being home, they kept me in Florida all winter. I think having Tommy John made me throw a little bit harder. It was pretty much having a strong lower half and the rehab I did on my elbow.

ST: When you played for the Colorado Rockies in 2010, you had an at-bat since the National League doesn’t have the designated hitter—yet. Did your experience in the big leagues impact your opinion of the DH?

MD: Back then when I played, it was just part of baseball. I really don’t understand why they want to change stuff like the speed of the game. You have a lot of guys who can play but not really play the field well. Obviously, we had David Ortiz in Boston and he could play a little first base, but they were paying him those big bucks to hit homers. I understand why people want it and others don’t but we can’t change it that much and should keep it around.

ST: You pitched against Ken Griffey Jr. and got him to ground into a double play in 2008 and faced a few of the better hitters to ever play the game. What did that mean to you?

MD: It’s pretty cool because when I came up, you had Sammy Sosa at the end of his career. Barry Bonds, I got to see before he retired. Ken Griffey, you bring him up, I used to play Ken Griffey Baseball on Super Nintendo. Seeing Frank Thomas, Griffey, and Sosa, these are guys who as a kid I was growing up playing as on these game consoles. It was pretty awesome to be able to say I got to face Griffey and Thomas.

ST: Coming out of a public high school in Massachusetts, what was the toughest adjustment to pro ball?

MD: When I got to pro ball, I was no longer like the man in high school. We had some good players in high school but once you get to pro ball, everybody’s there for a reason and is really, really good. At first, the hardest thing was being away from the family. I had to go down to Florida as an 18-year-old kid for the first time and that’s really hard, but you get used to it. You know me, I’m open to talk baseball and to talk to everybody, so when I first got drafted, I got along with pretty much everybody at every level I played at. I’ve always been grateful for that because I’ve always been the same guy. And in pro ball, you’ve gotta play catch every day. You condition every day. You run every day. High school is different. You play one or two games a week and get looked at, but the real grind starts by playing catch every day and taking care of your body, so that was the biggest transition.

ST: You had a 3.63 career ERA at Fenway Park and a total career ERA of 3.97. Fenway is a hitter-friendly park. Did you feel like you had an added advantage of being at home though since you’re from the area and had your house and family here?

MD: Definitely. Growing up in Boston, I saw how players react to the fans and how fans react to the players. If you don’t perform right away, fans can turn on you, but me being from the city and being able to go to Fenway and seeing how it was, how the minor leagues were, and how the organization prepared us, I loved pitching at Fenway. I never felt any pressure. The most pressure I felt was getting enough tickets for people who wanted to come see me play. I loved the pressure of being at home. It’s a privilege to be able to drive to Fenway Park and call it my job, you know?

ST: Other than baseballs traveling farther because of Denver's altitude, what was the biggest difference between pitching there and in Boston?

MD: I wish my career in Colorado had been different when I got traded, but I wasn’t there very long. I hurt my elbow again. Besides, you’ve got to keep the ball down, and I don’t know if they use the humidors for the balls, but it took me a month to get used to the breathing. I’d throw five pitches warming up, and I’d already be gassed. Coors Field is a beautiful stadium and the Rockies organization was great, I just wished it worked out a little differently.

ST: What makes a good manager?

MD: For me, it’s the relationship they have with the players. A lot of managers say, “The door is open,” but you can really tell which managers really care about their players whether it was Ralph Treul with the Red Sox organization or Ron Johnson who just passed away. These guys helped me throughout my career. I’m not gonna say I was the hardest worker. I got yelled at a lot, but these coaches really kept me in line when I was a rookie coming up and a prospect. The hardest thing to do is make it to the big leagues. And if you get to the big leagues, they say the hardest thing to do is stay there because you always have new guys coming in and they’re always looking for the next best thing. At the same time, I had a lot of positive people in my career who kept me on the right track.

ST: You’re also an avid candlepin bowler and grew up bowling with your friends and family as well. How did that help you as a baseball player?

MD: You know about my best friend Jose Diaz and what we’re trying to do with the city. We came up, it wasn’t playing stickball or baseball at a field somewhere in the winter especially. It definitely helped me in baseball because it kept me off the streets; it kept me with the right group of guys. A lot of them bowled as well. Candlepin bowling isn’t easy. It’s challenging. You have a little small ball you throw down the lane and not fall at the same time. It’s good hand-eye coordination. You control different muscles in your body when you’re bowling. Today, if you take one wrong turn or have one bad friend, it can lead you in the wrong direction.

ST: There’s a lot of athletic talent in big cities, but we often see it go to other sports like football and basketball or something will go wrong and someone wastes good athletic talent. I know you and Jose want to change that, but what can be done about it?

MD: That’s what Jose and I talk about all the time. I drive around the city and see these Little League parks where when I was growing up were brand new and had kids all over the place—and that was even before ‘04 when the Red Sox started winning so much. There were kids still playing stickball in the streets, and that’s what I want to bring back to Boston with The Boston Athletic Academy. I want to engage kids who want to play baseball. You see baseball going down in the city even with the Red Sox winning in ‘04, ‘07, ‘13, and ‘18. This is a perfect time for kids to get involved with baseball if their dream is to be a big league player. That was my dream growing up and I made it happen. Our vision is more academic than baseball, but it’s about giving kids another opportunity to keep them on the right path. For me, seeing kids go more into basketball and football, it’s fine if that’s what you want to do. But losing interest in baseball, that’s what we’re trying to figure out in the city. Like why is it going down when you have the Boston Red Sox and David Ortiz, still a big part of the organization, and you got little guys like Dustin Pedroia (just retired) who’s 5’5” and made his dream come true with all of the obstacles that he faced. I want to engage these kids and get them back involved with baseball.