History thwarted again at Belmont, and this year even the bathrooms were a letdown. 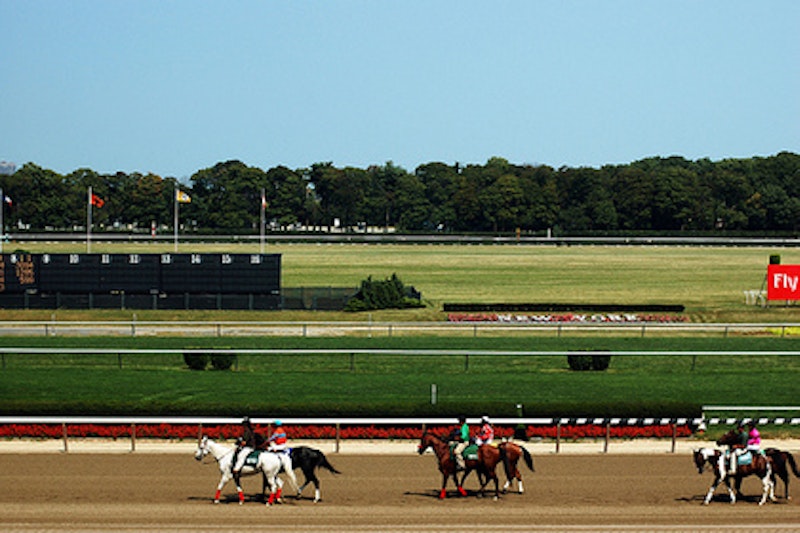 This past Saturday my wife and I attended the Belmont Stakes, our sixth straight trip to the races. It was actually one of our first dates back in June of 2003, and so it’s now something of a tradition. That year, Funny Cide was the horse vying for the Triple Crown and we were disappointed when he took third place and fell short. The next year we went with renewed enthusiasm, convinced that Smarty Jones would be able to make history. Once again, our Triple Crown hopes were dashed, however, as Smarty Jones finished a very close second place. In the subsequent years, we have dutifully made our annual trip to Belmont Park, even though in 2005, 2006 and 2007 there were no Triple Crown possibilities. We’ve come to love the event regardless of the stakes.

But this year seemed different, and we really thought we were on the verge of witnessing Big Brown capture the Triple Crown—the first horse in 30 years to do so. When we got word on Saturday morning that Casino Drive had scratched, it seemed like the stars were aligning given that he was the horse viewed as having the best chance to overtake Big Brown at Belmont. So as we prepared to leave Manhattan for the trip, we were full of anticipation and ready for a big day.

As anyone on the East Coast this past weekend can attest, it was extremely hot on Saturday—perhaps as hot as I can remember it ever being in New York this early in the summer. By the time we arrived at Belmont Park, the temperature was in the high 80s, and the humidity was staggering. As an Alabama native, I had some flashbacks to June days of my childhood, though usually we were near the water or powerful air conditioning then, which always made it more bearable. New York City is just simply not equipped to deal with such intense heat.

That first cold beer tasted particularly good after we’d taken our seats in the Grandstand, thankfully in the partial shade offered by its roof. Soon it was time for my annual foot-long hot dog, though it was here that the first signs of trouble at Belmont emerged. As we walked up to order the hot dog, we were told there was a 10-minute wait for the dogs. While this was not catastrophic or even horribly inconvenient, it was unusual given the enormous crowd expected that day, and the fact that there were nearly five hours before the main event.

The second sign of trouble came while I went to place a few bets. Walking toward the betting window, I noticed a phenomenally long line for the women’s bathroom. Granted, there is usually a line for the ladies’ room at any crowded public event, but there was something about this line that seemed extraordinary. I returned to my seat after betting, only to find that my wife was not there. Our friends told me that she had made a trip to the restroom. “Uh oh,” I thought to myself. When she returned, I could tell that she wasn’t happy. She sat down and informed me that there was no running water, and therefore no way to wash your hands in the sink and, perhaps more ominously, no way to flush the toilets. Her trip to the restroom had obviously been somewhat traumatic, and her entire mood was beginning to sour. “It’s like the Super Dome in there,” she exclaimed, and while I understood her comparison, I tried to put our dilemma in the proper perspective when compared to real tragedies. She agreed, and soon we were back to enjoying the races.

A bit later, it was time for my own trip to the restroom. As I made my way to the john, I again saw the women’s line, now even longer than before. Feeling lucky to be a male, I rounded the corner to the men’s room only to encounter a shut and bolted door, as well as a terrifically inebriated guy who informed me that the men’s room was “fucking closed.” Thanking him for the information, I headed to a lower level, sure that this was an anomaly. But as I made my way down the stairs, I saw the beginning of a line for the men’s room rivaling the one being braved by the unlucky females on the floor above. After waiting for quite awhile, I made my way to the door of the men’s room, and was repelled by a stench unlike any I can recall experiencing.  Perhaps I should have anticipated it given the number of guys I had seen exiting the restroom with their shirts over the faces like gas masks. When I walked in, it only got worse. The floor was wet—I didn’t want to know with what—and as I waited in line for a urinal, I noticed no one in front of me was flushing, and that women were lined up for the stalls. Women in the men’s room!  Sure enough, same problem here: no running water, no sink to wash my hands, no flushing the urinals or the toilets. Maybe they should have closed this one as well. I got out as quickly as I could, and now I was angry too.

After utilizing my wife’s Purell hand sanitizer, I headed in for something to drink. She had requested a hot dog, so I was on a mission to get that, and maybe a Diet Coke for myself. When the woman behind the concession counter asked if she could take my order, I requested a hot dog, a water, and a Diet Coke. “It’ll be another 15 minutes for the hot dogs,” she told me, “and we’re out of bottled water and soda.” Wow. Again with the hot dogs? Apparently water and soda were on the way, but she just didn’t know when they’d arrive. I returned empty-handed to my seat, and I could tell my wife’s enjoyment of this year’s Belmont was strained at best. I tried to boost her spirits with an ice cream bar—it had been a battle to score that—and we both took solace in the fact that Race 11, the Belmont Stakes, was only an hour away, as was, we thought, our chance to see a Triple Crown victory.

During that last hour before the big race, our mood and the mood of everyone around us greatly improved. The sun seemed to have hidden behind some clouds, and it actually felt as though the temperature had dropped a bit.  The crowd had reached its peak and there were no empty seats or patches of grass to be seen. Soon the two jumbotrons began showing footage of Big Brown as his trainer prepared him for the race, and the energy continued to build. Big Brown appeared on the track for the post parade, and cheering erupted from all over. There was a palpable sense that we were about to see something special. As he trotted past where we sat, proudly ridden by jockey Kent Desormeaux, the cheering quieted as each person marveled at what a magnificent animal Big Brown is—truly a beautiful horse. I looked like a tourist with a pair of binoculars and a camera both around my neck, and I alternated between the two. I also placed a dollar on Big Brown to win, a bet I never intended to cash as it would have made for a terrific souvenir of the event.

Soon, the horses were loaded into the starting gates, and before I knew it, they were off. The crowd again erupted as the horses began the 1.5 mile trip around the dirt track at Belmont—the longest race that most of the horses, Big Brown included—had run in their lives. As they reached the halfway point, it was a four-horse race between Big Brown, Tale of Ekati, Annak Nakal and the early leader, Da’ Tara, the longest shot of the field at 38:1 odds. As they rounded the final turn and prepared for the stretch run, I quickly traded my binoculars for the camera, and began furiously shooting a video while simultaneously snapping photographs, convinced that I was about to capture Big Brown’s move to the front and his historic gallop to the finish. But after just a few seconds of filming and photographing, a definite change in the fever pitch of the crowd was evident. Instead of cheers, I began hearing gasps, and soon some of those gasps became boos. I looked down to see Da’ Tara on his way to a commanding victory, while Big Brown was basically trotting, now dead last and far behind the other horses. It still isn’t clear what exactly happened to the horse, but Kent Desormeaux definitely pulled him up sensing something was wrong, and I applaud him for that in an industry where far too often the health, safety and well-being of the horse is not the first thing considered. As for those who booed, I’ll charitably chalk it up to a few too many beers in the blazing sun.

So it was another year at the Belmont, and another Triple Crown has eluded a great horse. Despite a few issues at Belmont this year, the overall experience remained a good one—particularly when my wife let me know that she had placed a last minute $2 bet on Da’ Tara, which paid out $79! Not bad for a day at the races.