The ongoing cultural battle over Title IX continues as more college-level wrestling programs are cut. But as a recent Arizona State protest shows, wrestlers aren't known to back down easily. 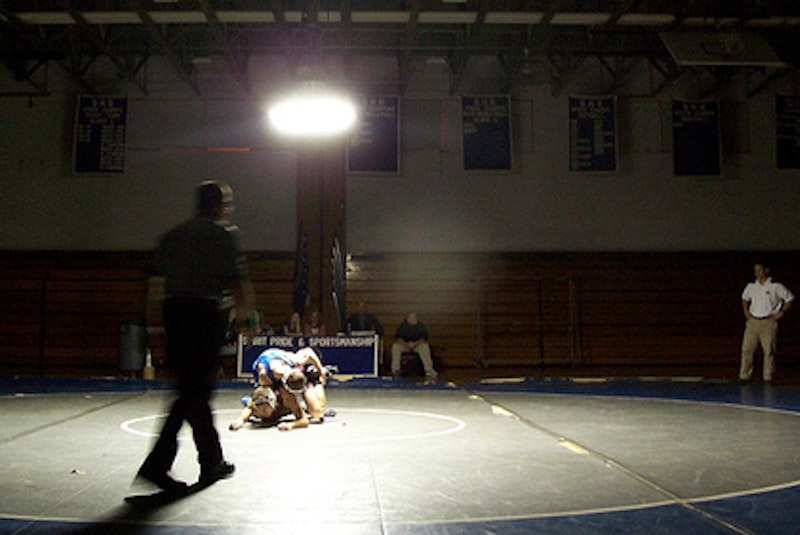 Winter was always a bittersweet season for me. While friends were going out and having fun, I was constantly training. For five months out of every year, I subjected myself to torture: grueling and physically devastating practices, weightlifting, running, starvation and dehydration. I would wake up in the morning barely able to move and get ready to do it all again. I was a wrestler, and despite the brutality that came with the sport, I’d do it all again in a heartbeat.

Wrestlers are a rare breed. You can find them huddled in corners of the cafeteria, lost in a daze as they nibble on salads and take tiny sips of water. You can see them on match day, running laps in the gym wearing three sweatshirts and a wool cap to shed that extra half-pound. Their arms and faces are red with mat burn and their ears are puffy and mangled. They are some of the most miserable creatures one could ever hope to find, but almost nowhere else can you find such dedication.

Throughout my wrestling career, people asked countless times, “Why do you do it? Why do you subject yourself to all of that?” Any wrestler would agree that it’s a love-hate conundrum. He puts in hours upon hours of brutal training for six minutes of glory on the mat, and each time he comes out on top and gets his hand raised in the center, he can look back at what it took to get there. Each loss makes him put in even harder work the next day. It’s more than a lifestyle; with enough time, it becomes an addiction.

However, wrestlers across the country who have dedicated themselves to the sport are finding programs swiftly jettisoned. This is mainly the result of Title IX, the law passed in 1972, which stated that universities must provide a proportional number of athletic teams for both men and women. Following its passing, athletic programs across the country have been cut to meet the set quota, and the sport of wrestling has taken the brunt. Since 1972, 458 varsity wrestling programs have been cut, only 11 of which have later been reinstated.

This May, Arizona State University announced that for budgetary reasons, they would be forced to cut three athletic programs: men’s swimming, men’s tennis, and wrestling. Lisa Love, the vice president for university athletics said, “These three sports were selected with the following criteria: financial impact, potential competitive success, conference/regional support and gender equity.”

I found it interesting that “potential competitive success” and “gender equity” were cited as reasons for the cut, especially pertaining to the wrestling team. The Arizona State wrestling team is the only program in the western United States that has won an NCAA Division I title. So there’s obviously no potential for competitive success there, right? Also, the cut of Arizona State reduced the once prominent Pac 10 Conference to a mere two teams (Oregon State and Stanford).

But what baffles me the most is the idea of “gender equity,” which directly relates to Title IX. All three of the program cuts were men’s teams. After they were made, 12 of the remaining 20 programs were women’s teams. Hardly equal.

I also thought it was strange that, in a time of budgetary crisis, the university chose to make cuts within the student body, while maintaining their $420 million dollar Mars project, the Phoenix Lander. What the university didn’t count on though, was the fact that wrestlers do not go down without a fight.

The Arizona State situation created an uproar in the wrestling blog community. Within days, the event started a chain reaction, which led to mass efforts by outside contributors to reinstitute the program. Through these outside donations and efforts, enough revenue was collected to allow the program to be reinstated. The Sun Devils will hit the mats once again in 2008.

Lisa Love was blown away by the efforts of the wrestling community, claiming that the new goal for the program would not just be raising enough funds to keep it alive, but to push it into national prominence.

The Arizona State situation was an accurate representation of what it means to be a wrestler. Between training, competition, cutting weight, and mental preparation, wrestling is a 24-hour commitment, an ultimate devotion. If you try to take something from a wrestler, he will fight to get it back. The drive for success is ingrained in his mind, and he knows what it takes to get what he wants.

Maybe that’s why wrestlers go on to do great things. They become lawyers, doctors, businessmen, authors and politicians. In fact, 11 former American presidents are ex-wrestlers, 12 if John McCain is elected. I’m not saying that wrestling is the key to success, but it does require a unique amount of commitment and intensity from the athletes, and I think that those ideals carry on into life outside the gym. I know they have for me