One Young Fan's Long Journey to the Playoffs

No jinx, but the Red Sox are back. 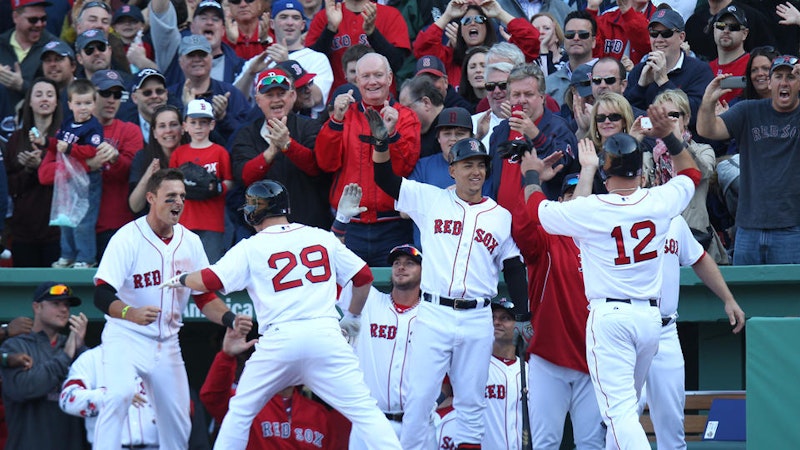 It’s been eons since this fan (19) has seen his team, the Red Sox, in October. They haven’t yet clinched the American League East title: with a 9.5 lead over Tampa Bay and a 92-59 record, it’s pretty much a lock, but considering the team’s history, who knows? But I’ve got a good feeling this time. Boston will finally see its team in the playoffs once again. The fans deserve it. The playoff drought is finally ending. Yep, the Red Sox are back!

All kidding aside, Boston has been absent from October baseball for a relatively long time considering their recent track record. The team hasn’t made the playoffs since 2009, when they were eliminated in the first round by the Angels in a three-game sweep (thanks a lot, Jonathan Papelbon). The big MLB story this year is undoubtedly the Pirates achieving their first postseason berth since 1992, and rightfully so, but, for me at least, the most interesting part of the team isn’t their 2013 season itself, but the winter that preceded it, and how the strategy behind it was shockingly similar to the Red Sox’s, a ballclub capable of quadrupling their payroll.

Both general managers, Ben Cherington (Boston) and Neil Huntington (Pittsburgh), were coming off sub-.500 seasons—they knew that radical change was necessary, so they focused on one thing during the offseason: upside. Huntington signed Francisco Liriano and Russell Martin to high risk/high reward two-year deals, and, surprisingly (I criticized these deals at the time they were signed), both players have provided immense value for the Pirates, becoming an essential part of their playoff run. Cherington nabbed Mike Napoli and Shane Victorino (another deal I scoffed at; I was more against the years then the player himself) at what now look like below-market prices.

At the heart of their improvement, though, like with most teams, is a revamped pitching staff, both in the starting rotation and bullpen. Behind Boston’s success is a bounce-back, if not vintage, season from Jon Lester, a total turnaround from John Lackey, 90 ace-like innings from Clay Buchholz, continued improvement from lefty Felix Doubrant, and, perhaps most importantly, closer Koji Uehara’s white lightning year-long run. The Pirates have been led by Liriano, A.J. Burnett, Jeff Locke, and the former Red Sox Mark Melancon, who Boston fans practically booed out of their city.

Yes, it’s been a great year to be a Sox fan. Any year when your team makes the playoffs is bound to be entertaining, but this year has been particularly enjoyable, mainly because the 2013 Red Sox are such a fun team. Much like the 2004 band of idiots, the 2013 team looks like a mismatched group of convicts and teenagers. On one side you have Jonny Gomes and Napoli growing out their beards to hideous proportions, and then there’s Jose Iglesias (at least for the first half of the season) and Xander Bogaerts, who can’t even shave yet. The amount of fun they have in that clubhouse is captivating, and although I don’t believe it affects the on-field play, it sure contributes to the fan experience. Even though former GM Theo Epstein left a year earlier, 2012 was still very much his team. 2013 is the first official year of Cherington’s tenure, and also the first year of the new Red Sox dynasty.