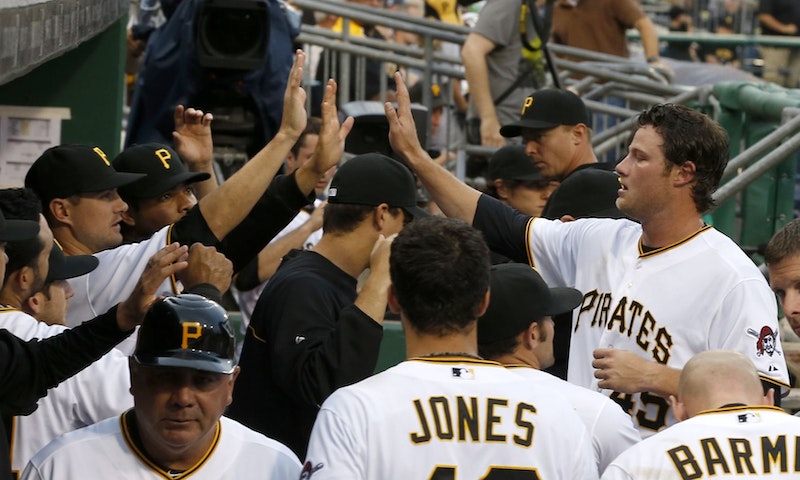 As the folding pocket schedule tears through its last panel, it might be time to defer to “September Song,” especially the part where Frank Sinatra sings “and the days dwindle down to a precious few.” That’s what’s happening now with “regular season” baseball games.

For the Pittsburgh Pirates, their starting pitchers have pretty much headlined the big room all summer, with a very good bullpen as their closing act. The Bucs’ team ERA is third (3.32) in MLB behind the Dodgers and Braves this season. The oft-recalled 1992 Pirates had a staff counter-balance of a mulleted-Texan (Doug Drabek) a moist southpaw (Danny Jackson) and the accidental knuckleballer (Tim Wakefield). Their team ERA was also third (3.35) in MLB, behind Atlanta and Montreal. Harkening back to the World Champions of 1979, Pirates fans enjoyed the brawn of Jim Bibby, the pipe-cleaner armed hothead Bruce Kison and Mountaineer Don Robinson whose hat never seemed to fit. The “We Are Family” Bucs had a team ERA of 3.41, which was fourth in all of MLB.

This September’s stretch run includes six games against Cincinnati. The Reds refuse to go away, and as September concludes, the Bucs face them in a home-and-home separated by a final visit to Wrigley. Here are the five men who are being asked to rise up, take the mound and send Dusty Baker and his harum-scarum management style to the showers:

Francisco Liriano I still can’t say his first name. Despite the Pirates recent slaying of the albatross of 20 consecutive losing seasons since Braves pinch-hitter Francisco Cabrera knocked in Sid Bream in the 1992 NLCS, I still can’t say it. When the Pirates signed Liriano in the off-season he immediately has some mysterious Christmas Day injury. Something about trying to scare his kids. Broke his left arm, the one that holds the glove. His contract was redone as a one-year deal, and he didn’t fully recover until May of this season. Since his debut he’s pretty much been lights-out, leading the staff in wins and stopping most Bucco losing streaks. He keeps his cool on the hill and yes he’s the same dude who threw the no-hitter for the Twins in 2011.

A.J. Burnett is the contrast to Liriano’s cool. The former Yankee began his career with the Pirates last season by fouling a practice bunt off his eye socket in Spring Training. His skull was damaged and he didn’t show up until several weeks into the 2012 campaign during which he kicked ass as only a guy named Allan James from Little Rock can. His bristle goes over well with the tame Pittsburgh media scene. He would be that heavily-tattooed gent sprinting around the outside of PNC Park on a Sunday morning after a brilliant Saturday night start. I almost collided with him in search of coffee on Federal St. There he was running full bore in his torn sleeveless t-shirt. A pedestrian next to me stopped as well, and we had an O.J.-Simpson-running-through-the-airport moment. “Go, A.J., go!” we yelled and he gave us a parting wave as he disappeared around the corner toward the Honus Wagner statue. Burnett’s last post-season appearance was a strong start for the Yankees, and most Bucco fans would want A.J. taking the ball for any Very Big Game in the coming weeks. He racks up the Ks now with a lot of nasty junk, which can be very entertaining to watch but is surely agonizing for Pirates catchers.

Jeff Locke is a Braves lefty arm product who came over in a steal of a trade when Pittsburgh sent Nate McLouth to Atlanta in 2009. Locke made the All-Star team this season, but struggled in gargantuan fashion for most of the second half. Burnett seemed to have taken him under his wing, but lately Locke has been an obsessive nibbler who can’t finish batters off. He looks like he could be fronting an emo band. The dugout camera catches him in mid-pout sometimes and he looks like he was drawn by Edward Gorey, sulking there next to the Gatorade jug. If he could Ouija Board his way back to his first half form, it would be much appreciated.

Gerrit Cole pitched the game of his young life when the Bucs beat Texas 1-0 for win number 82, which officially ended the streak. Cole’s heat outdueled Yu Darvish in a game that featured two Scott Boras clients in the historic victory. Cole uses Boras, and the first-round draft pick UCLA stud finally looked like a pitcher instead of just a heat-thrower. The lone RBI came from Pedro Alvarez, another Boras user, another first-round draft pick and a key element in the Pirates “Sweep in the Heart of Texas” interleague surge. Cole has a competitive intensity veering from a sullen, singular focus to a semi-controlled rage. An unsmiling rookie—always a good sign.

Charlie Morton plays the role of learned veteran, a quiet executive vice president type who camps out next door to the corner office. Like Bob Walk in 1992, he’s the sleepy hurler who always looks like he just woke up from a three-hour nap. Ground Chuck, as he’s called, is another winning scratch-off ticket culled from the McLouth to Atlanta “deal.” Morton’s coming off Tommy John surgery and he’s throwing baseballs so weighty they spread fatigue throughout the batter’s box. Morton’s starts usually turn into shortstop fielding drills. He admittedly tried to clone Roy Halladay’s style and it seems to have worked. He had a slight foot strain during the disastrous visit to St. Louis, but Morton seems to be ready to return to his “pitch to contact” effectiveness.