The Phillies Blow Up the Market Again 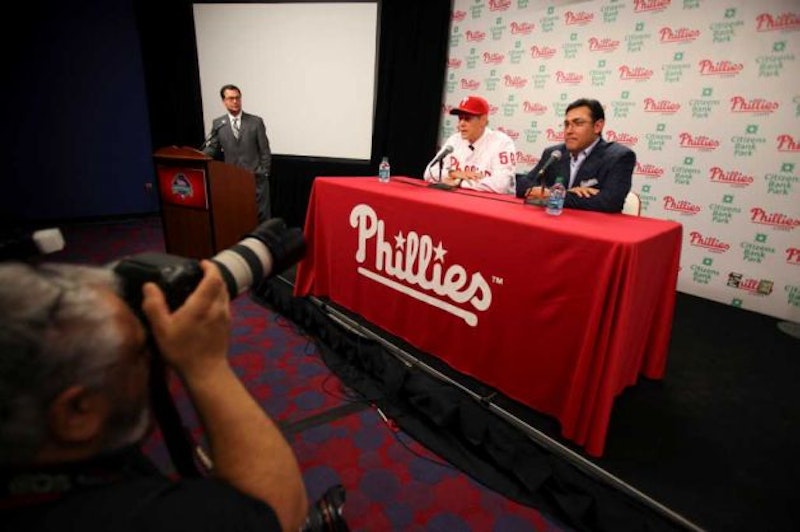 It didn’t take long, but then it never seems to: Ruben Amaro, Jr. doing what he has always done since taking over as General Manager of the Philadelphia Phillies three years ago ran to the front of the line waving money. The over-eager Amaro started the off-season with a bang by signing Red Sox closer Jonathan Papelbon to a four-year, $50 million deal. The contract contains an easily vesting option that can push the total value of the deal over $60 million over five years.

According to baseball’s current salary structure, that is an incredible amount of money to give to a relief pitcher. The highest average annual value ever paid to a reliever is $15 million to Mariano Rivera of the Yankees. Rivera is certainly the best reliever since his career got started in 1996, and probably the best ever. But, over the life of his career, Papelbon’s stats aren’t far from Rivera’s. Take fWAR (Fan Graphs Wins Above Replacement stat). From 2006, Papelbon’s first year in the major leagues, through last season, he’s edged Rivera 14.7 to 13.9. In that sense Papelbon is getting something akin to market value.

But if you subscribe to the “There is Rivera, and there is everyone else” school of thought, then you have to start wondering what Amaro was thinking. Even if you don’t, the most money Rivera has ever made in any deal he’s signed is $45 million (a three-year contract covering the 2008-10 seasons). Papelbon eclipsed that. True, Papelbon’s deal covers more seasons for a lower average annual value (AAV), but total guaranteed money is important, and by that yardstick Papelbon’s new deal blows everything that Rivera has ever signed out of the water. Brad Lidge, Francisco Rodriguez, and Joe Nathan all signed three-year deals for $37.5 million, $37 million, and $35 million, respectively, so you can see Papelbon’s deal sets a new standard for relievers.

It’s also worth mentioning that Heath Bell, Rodriguez, Ryan Madson, Jonathan Broxton, Francisco Cordero, and the remains of Nathan are all on the market as well. One wonders if it was necessary for Amaro to spend that kind of money on a closer when the market was almost saturated with them.

It’s important to note that Amaro has done this before. In April of 2010, Ryan Howard was coming off a season that saw him hit 45 homers and post a .931 OPS. Howard was 29 at the time and his OPS was the ninth highest in the National League. He was also two years away from free agency. Amaro gave him a five-year, $125 million contract extension anyway. The extension wouldn’t kick in for two more seasons because the Phillies already controlled Howard through 2011.

Howard had zero bargaining power except to threaten to test the free agent waters after the 2011 season. But after the 2011 season four first basemen who finished ahead of him in OPS that season, Albert Pujols, Adrian Gonzalez, Prince Fielder, and Derek Lee, would also be free agents. In other words, again, the market was very likely to be full with free agents first basemen looking for work, many of them (though not all) younger and/or better than Howard. A smart businessman would look at this potential glut and not feel the need to jump, but Amaro couldn’t wait.

The shocker of the deal is that, despite handing out $125 million two seasons before he had to, Amaro got no discount. Howard’s deal is worth less total money than some of the deals the other first basemen have or will sign, but in terms of average annual value, there’re only three contracts that have been worth more. Roger Clemens signed a $28 million deal with the Yankees in 2007, but the deal was signed in the middle of the season so the money was pro-rated, meaning Clemens never saw all $28 million. The other two are the contracts signed by Alex Rodriguez. The first, signed with Texas in 2001 was worth $25.2 million per season. The second, signed with the Yankees in 2008, is worth $27.5 million per season. That’s it.

Howard’s deal is just the most glaring example though. There was also Cliff Lee a year ago, who got more money than any pitcher had ever made per year on the third biggest deal a pitcher had ever received. At least you can credit Amaro with going after good players in Lee and Papelbon. If Howard’s deal turns sour then it won’t be the worst long-term contract in baseball history (check out Alfonso Soriano and Barry Zito).

Amaro doesn’t worry about the market or other available players. He sees a guy he wants and he goes after him almost regardless of money. He wanted Howard and so he paid him; he wanted Lee so he swooped in and stole him, not by playing to Lee’s love of Philly as has been said, but with the biggest contract offer. This past weekend he did it again with Papelbon, setting a new standard for relievers in the process.