But will it equal a Super Bowl victory? 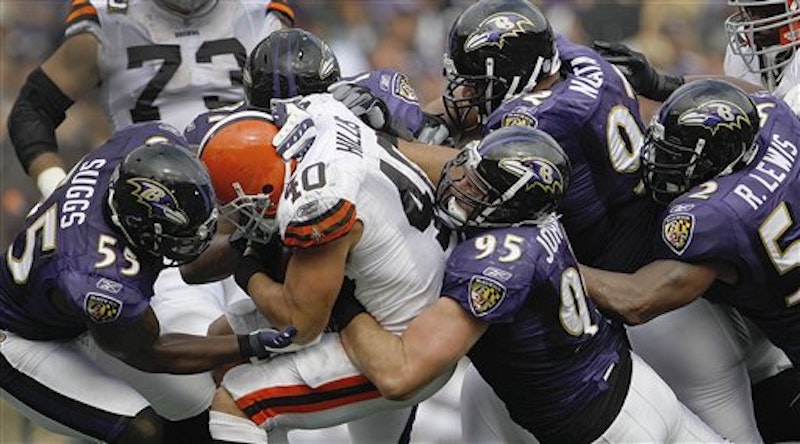 The Baltimore Ravens are once again near the top of the NFL's defensive rankings. Baltimore is currently second in the league in sacks, yards per game and points allowed. Old stalwarts Ray Lewis and Ed Reed still loom large over the Ravens defensive unit despite the advanced stage of their careers. The two future Hall of Famers have an uncanny ability to constantly be around the ball. Terrell Suggs and Haloti Ngata have emerged as the team's most irreplaceable defensive players. The relentless pressure and constant mismatches along the defensive front presented by Ngata and Suggs are a major reason for the Ravens success.

Defensive prowess is nothing new in Baltimore. The franchise rode the coattails of a historic defense to a Super Bowl victory a decade ago and has consistently ranked as one of the NFL's top five defenses in nearly every season since that championship run. What’s new in Baltimore is the impact made by some of the team's late round draft picks and unsung heroes.

Give credit to former fans whipping boy Paul Kruger for his stellar play over the past month. A second round pick out of Utah in 2009 Kruger was expected to give the Ravens a reliable edge rusher on passing downs. He played in just nine games as a rookie registering 11 tackles. His lone memorable moment was an overtime interception that set up a game winning field goal against Pittsburgh. In 2010 Kruger was virtually invisible playing in 11 games and recording one tackle and one sack. That’s all changed this season. Kruger has been a major contributor for the first place Ravens, recording 3.5 sacks, two fumble recoveries and two passes defensed. Patience and perseverance has paid off for team and player alike.

Kruger's running mate as a pass rush specialist is rookie Pernell McPhee. McPhee was a preseason sensation after being selected in the fifth round of the 2011 draft out of Mississippi State. He looked like he would be everything the Ravens and their fans had hoped for from Kruger.  McPhee has carried his stellar August into the regular season with three sacks to his credit. He’s also forced a fumble and knocked down one pass. McPhee and Kruger have quickly emerged as valuable contributors to the Ravens relentless pass rush.

Baltimore entered the season with high hopes for the defensive backfield. The unit struggled for stretches of the 2010 season and the front office took steps to address those problems during the offseason. GM Ozzie Newsome used his first round pick on cornerback Jimmy Smith and re-signed Chris Carr. Just two games into the 2011 campaign the Ravens had lost Smith and Carr to injury and Dominique Foxworth to complications from last season's torn ACL. Defensive coordinator Chuck Pagano turned to Lardarius Webb and Cary Williams. The two young corners have responded with play ranging from solid to excellent. The 6'1" Williams, a former practice squad player, gives the team some much needed size to match up against large receivers. He has yet to register an interception but he does have six pass defenses in eight games. The impact of new defensive coordinator Pagano should not be dismissed. After his promotion, following the departure of former coordinator Greg Mattison, Pagano promised an aggressive defense that would swarm to the ball. Pagano and his troops have delivered the big play defense as promised recording 26 sacks, eight interceptions, and forced 14 fumbles.