The Head and the Heart

The Penn State sex abuse scandal, Joe Pa's firing and the shock of a whole community. 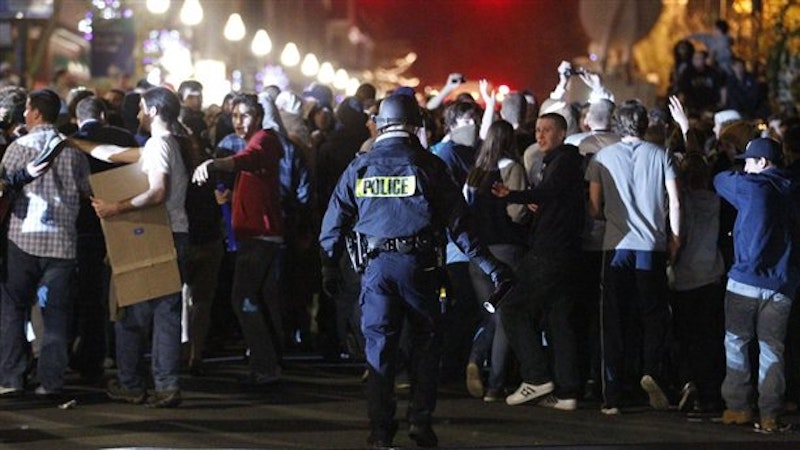 There are plenty of good articles and blog posts out in the ether detailing the sorrow surrounding Penn State University’s appalling and still-unfolding child molestation scandal. They detail the necessity of head football coach Joe Paterno’s ouster, based on this failure to report formed defensive coordinator Jerry Sandusky’s heinous crimes against children—and disadvantaged children, at that, if you can possible fathom this being any worse.

Paterno has been PSU’s head coach for half a century—two national championships, three Big Ten titles, dozens of All Americans and above all a commitment to a meshing of athletics and high moral fiber. The smoking gun: Paterno was informed, by a graduate assistant, that Sandusky raped a child in the PSU locker rooms and simply passed the buck to the athletic director. The police should have been called. End of story.

There's a lot of "my head is firm in its judgment but my heart is torn" and "this forever tarnishes his legacy but doesn't undo what he has done" sentiment in the various reactive pieces to the stunning scandal. Criticism has been leveled at the several thousand PSU students who, upon word of Paterno’s firing, took to the streets and knocked over a couple of lampposts before dispersing.

I think the student reaction is evidence that, in real time, the binary—heart vs. mind, the big picture vs. the circumstance of Paterno’s departure—doesn't work. It can't be both. Paterno can't leave in disgrace while still being The Paterno of yore. Your head can't agree to disagree with your heart. The emotional energies are too large to hold in balance, and you're forced to tip one way or another. Maybe after the grand juries adjourn and Sandusky disappears in a prison somewhere, PSU students and fans (the ones firmly pro-Paterno) will be able to finally, painfully, mix the two judgments together.

But the protesting shows that, in the moment, the corrective lens of history and justice isn't—can't be, will never be—a silver bullet, a panacea. The tradition and altruistic largess of PSU and Paterno are the basis for whole communities and oceans of emotional history spring. I'm a graduate of the University of Michigan, so I'm somewhat familiar with the institutional pull of college football.

The protesting students depress me (and let's not forget that there was a small contingent of student out supporting the board's decision), but can we really, fully and without doubt, denounce them? Pity, empathy, or some combination of the two is needed—but only for a brief amount of time. The real victims will have no chance to protest, no chance to reclaim history—physical, emotional, and psychological history—that really matters. That's why the protests are so painful to watch from the other side. It's wrong to be hurt over the firing of a coach when real evil has been ignored.

An evergreen realm of critical discussion revolves famous artists, authors, politicians, etc. and their egregious faults (personally, learning that Orson Scott Card is aggressively anti-gay took a lot out of my love of his books) in tandem with their contributions to society at large. This is that sort of situation, only magnified by a thousand times over, magnified by some of the most base and evil actions our humanity can put a name to. Herd mentalities, the circling of wagons, the student protests—it was going to happen in one form or another. All told, the protest wasn't very large, there probably won't be any such thing to happen again. The Dedicated will be quiet, wounded, perhaps irreparably, by the clash of entrenched sense of community stemming from a silly game with, well, humanity—and the lack thereof.

We all have a part to play in the continuation of a civilized society. We can’t possibly be perfect, nor should we be, but we must confront our demons, we must confront that which is wholly separate from the institutions and systems and loves and passions to which we devote ourselves.

For the most fervent of Paterno supporters, there is an echo of recognition from lesser scandals surrounding Republican presidential candidate Herman Cain, who has been under fire for a variety of sexual harassment—and outright sexual assault—claims. Whether he is guilty or innocent appears unimportant to mainstream Republicans and their revered pundits; what is agreed upon is that sexual harassment barely, if at all, exists. It is a conscious “turning away from the light” that is so disturbing, here. In the crucible of politics and abortions and gay marriage, any sort of attack not sanctioned by Rush Limbaugh is considered inadmissible, something cooked up by “the Left” to demonize “our black guy.”

The worth of a person, a community, a country, is tied up with moral responsibility—for the individual as well as the group. For PSU, a handful of administers allowed a predator to continue his ghastly crimes without pause. For mainstream Republicans, the wholesale denial of sexism, of misogyny, of sexual harassment and assault, betrays a paucity of empathy and destructive disregard for the very real forces of inequality and criminal mistreatment in our society.

Moving forward—how is that possible? The students of PSU, instead of donning all white for this Saturday’s home game against Nebraska, will instead wear all blue, all proceeds from the t-shirt sales going to prevent child abuse in Pennsylvania. That’s the sort of collective action that defines a community. It won’t do anything to repair what happened to the eight children (that we know of) who were victims of Sandusky, but it’s a collective action that does not hide from the terrible realities of our human failings.