I was gimpy, the Yankees won, but playoff baseball's back. 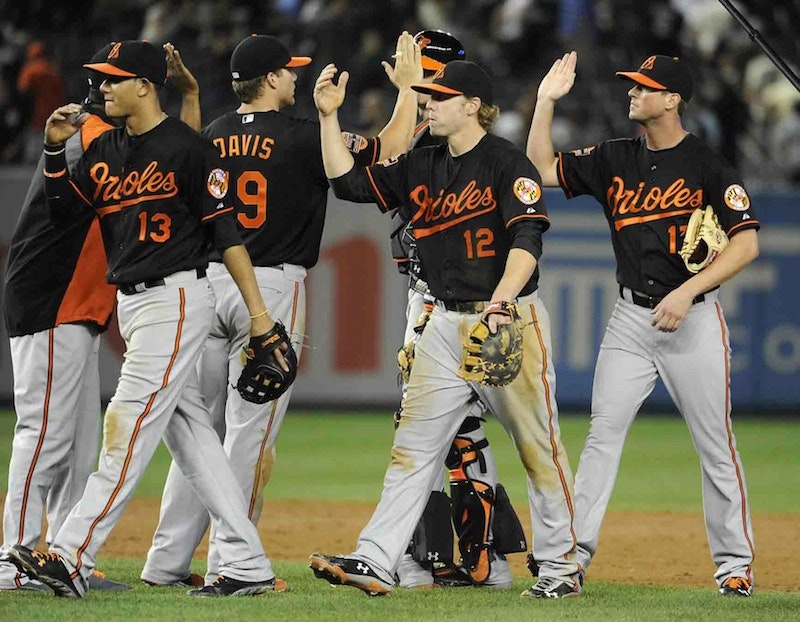 I tore my right Achilles tendon about two weeks ago playing flag football. It could’ve happened jogging through the neighborhood, playing tag with the kids in the back yard, or biking up the rail trail. Unfortunately it happened playing flag football, which has led to about 50 people reminding me that I'm not 20 anymore which I guess is some kind of invitation to get fat and lazy. The prospect of taking my surgically repaired right leg and crutches to a crowded ballpark whipped into an October frenzy was a bit daunting, but missing the game was simply not an option. Another complicating factor was that we had no baby sitter for our six-year-old son and three-year-old daughter. It wouldn't have mattered anyway. The notion of mom and dad heading the ballgame while the little ones went to bed would not have gone over well in our house. With a school holiday (Columbus Day) looming on Monday we went for broke and took the kids to the ballpark.

Rain began to fall as we rode the light rail towards Camden Yards but it wasn't enough to dampen our spirits. A rain delay was announced as we walked through the gate. We'd waited 15 years for this night, so what's a few more hours? The footing was treacherous as the rain pushed about 40,000 people onto the concourse. I did my best baby giraffe impression as I attempted to maneuver through the crowd. After nearly falling on my bad leg I told my wife that we needed to track down a wheel chair.

I last attended a playoff game at Camden Yards with my dad in 1996; that game was also against the Yankees. I can still see Cecil Fielder launching a Mike Mussina fastball deep into the left field stands to claim the lead for the Yanks. I never thought it would take 16 years for me to attend another playoff game in Baltimore. I sure as hell didn't expect my October reunion with baseball to feature a wheel chair, two-hour rain delay, and two small children, but there I was.

As my wife pushed me through the crowd, with my daughter riding on my lap, we were continually greeted by orange-and-black clad fans who either told me "that sucks, dude" or " man, that's dedication." It was actually a bit of both mixed with a touch of lunacy.

We waited out the rain delay chowing down ballpark franks and finally made our way to our seats nearly two hours after arriving at the game. I hopped on one leg up the steps of the upper deck to row 12. It was announced that the game would start in 40 minutes. The kids were full of energy, chanting, “Let's go O's!" a full half hour before first pitch. When the game finally started the crowd was in a full on frenzy. When a "Yankees suck" chant broke out my daughter was more than happy to chant along. My wife quickly nipped it in the bud, informing Lulu that those weren't nice words, but by that time the fans around us had been endlessly entertained.

As the O's took the field, with my little boy next to me waving his orange towel, I either misted up a bit or got a peanut shell in my eye. Earlier, I caught myself blubbering like an idiot though I was fully prepared to use the painkillers as an excuse.

We hung in at our seats until the end of the seventh inning not wanting to push our luck any further. At that point we were either the best, or worst, parents in the world depending upon your understanding of fandom. My wife and son tracked down a wheel chair as I sat at a picnic table with my daughter sleeping on my lap. A couple of fans came by and offered me a hot chocolate, which I gladly accepted. We chatted about my injury and 15 long years of futility as the Orioles wasted a leadoff double by J.J. Hardy in the 8th. The game went to the ninth inning knotted at two.

It was almost midnight when we boarded the light rail to begin our long trek back to York, PA, smiles turned to yawns. Thankfully, we left before the Yankees' five-run onslaught in the top of the ninth. Regardless of the outcome, we'd had the time of our lives. It would be nice to think that the Orioles could make playoff baseball a regular occurrence but if there's one thing I've learned since watching Fielder take Mussina deep it's that nothing is guaranteed.