The Orioles Hope for a Reboot With "Re-Opening Day"

What will happen if the Orioles can't turn things around? 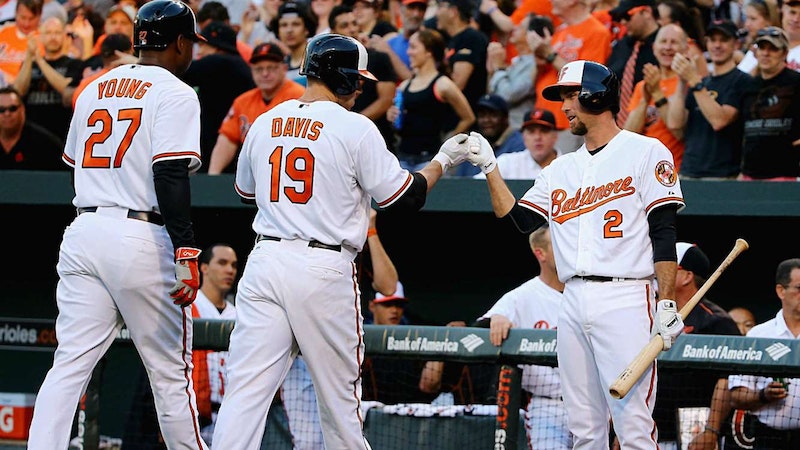 The Baltimore Orioles returned to Camden Yards last night, this time with actual fans in attendance, looking to right a troubled season. While the Orioles’ injury and rotation issues are nothing compared to the problems that have come to light in Baltimore over the past three weeks, they are problems just the same. The Orioles ran with a clever Internet creation that dubbed Monday’s home game “Re-Opening Day” in an effort to raise civic morale and fill the Yard. The squad even sported some sweet new white home jerseys with “Baltimore” across the chest.

The announced attendance of just 20,468 fell far shy of a sellout but Ubaldo Jimenez quickly overshadowed the shortcomings of his audience. Jimenez continued his rebound season, tossing seven superb innings against the Toronto Blue Jays in a 5-2 win. Jimenez allowed just two runs while striking out nine and lowered his ERA to 2.41. The Orioles need Chris Tillman and Bud Norris to follow the lead of Jimenez if they hope to climb back to the top of the AL East.

The Orioles drew criticism from fans in the offseason for failing to retain free agents Nick Markakis and Nelson Cruz. The addition of Travis Snider was generally met with a shoulder shrug and Buck Showalter is still waiting for someone to win the left field and right field jobs. The Orioles MVP to this point in the season is arguably Jimmy Paredes, which probably isn’t the way Dan Duquette drew it up in Spring Training.

Given that they’ve spent the better part of three weeks on the road and Bud Norris, last season’s 15 game winner, currently sports a 9.88 ERA things could be much worse for the Orioles. Baltimore sits just one-and-a-half games out of second place and a clear division favorite has yet to be unearthed. The Yankees have been on a remarkable hot streak but a weak lineup and lack of depth figures to catch up to the Bombers in time. The Rays have lost two starters to season-ending injuries and the Blue Jays and Red Sox lack the pitching to be viable contenders.

If Showalter and company can’t establish some momentum over the next two months there could be a major shakeup at Camden Yards. The Orioles have an overwhelming number of players scheduled to hit free agency after this season. Wei-YIn Chen and Bud Norris, both impending free agents, could have new homes by July. Bullpen stalwarts Darren O’Day, Tommy Hunter and Brian Matusz could offer some value to contenders. Matt Wieters, still rehabbing from Tommy John surgery, and Chris Davis may also be playing their last days in Charm City.

The Orioles lack impact bats in the high minors but they boast an array of impressive pitching prospects like Brandon Davies, Mike Wright, Mychal Givens, Oliver Drake, and Tyler Wilson. Kevin Gausman is expected to join the Triple-A Norfolk rotation when he returns from the 15-day disabled list and Dylan Bundy is showing encouraging signs at Double-A. Both youngsters could find themselves in the O’s rotation before August and they’ll likely be an upgrade over Norris.

If Re-Opening Day doesn’t provide the season reboot the Orioles and fans are seeking Dan Duquette may be forced to hit the reset button on the season. Baltimore owns four of the first 102 picks in next month’s amateur draft. If the team decides to move some of the aforementioned impending free agents we could see a serious influx of young talent over the next two months. Given the team’s pitching depth and Adam Jones/Manny Machado/JJ Hardy-core such a scenario should be viewed as a re-stocking more than a rebuilding.