Grady Sizemore and the Absence of Hope

When will the Phillies turn it around? 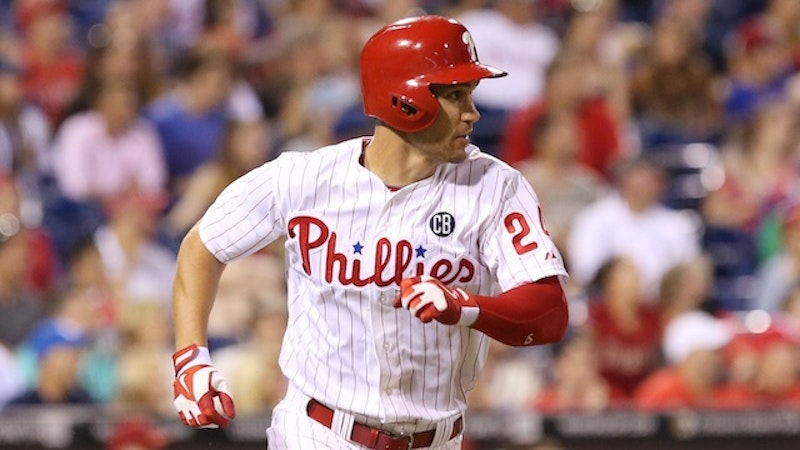 Grady Sizemore hasn’t been a viable Major League regular since the 2009 season. In his age-26 season, the Cleveland center fielder posted a .788 OPS in 106 games. Sizemore had been an American League All Star and MVP candidate in the three previous seasons before injuries derailed his rise to fame. Now, six years later, Sizemore is playing out the backend of an injury-riddled career for the most fitting team possible.

Simply referring to the Philadelphia Phillies as a “bad” baseball team would be a gross understatement, like calling Tiger Woods a “little” unfaithful. A season after going 73-89 the Phillies seem intent on making last year’s club look like a title contender. The 2014 Phillies were outscored by 68 runs on their way to those 89 losses. This season’s club has already been outscored by 65 runs in just 35 games. How bad are the Phillies? So bad that they’re platooning Grady Sizemore and Jeff Francoeur in right field.

The Phillies have been on a steady decline for the past few seasons. The reluctance of the Ruben Amaro Jr.-led front office to rebuild the roster and inability to acquire young talent has landed the Phillies at the bottom of the National League. Their run of five consecutive NL East titles from 2007-2011 is now a distant memory. While the albatross contract of Ryan Howard has caused plenty of criticism and vitriol to be directed at Amaro, it is the presence of Sizemore and Francoeur on the current roster that may be most damning.

There is simply no other Major League franchise that would employ Sizemore and Francoeur at this point in their careers. Sizemore was cut by the Red Sox last season after they realized he wasn’t about to rekindle any of the magic from his Indians days. Francoeur’s bat had declined to the point that he actually converted to the mound last season, pitching 8 games for the Padres’ Double-A affiliate. The fact that Amaro gave manager Ryne Sandberg this pair, along with light-hitting Rule 5 pick Odubel Herrera, has moved the Phils from hapless to hopeless.

It's been a foregone conclusion that Amaro will deal ace lefthander Cole Hamels at some point this season. Amaro has apparently been driving a hard bargain in Hamels talks. Boston and San Diego have been prominently mentioned as likely landing spots for the All Star lefty, but Red Sox prospects have a tendency to fall far short of their hype and the Padres dealt a lot of their minor league depth over the winter. Amaro’s trade history should make Philadelphia fans and management nervous. He failed to land a viable Major Leaguer in return for Hunter Pence (traded to the Giants in 2012) or Cliff Lee (traded to Seattle in 2009). A whiff on the Hamels trade will further derail the Phillies’ future. Amaro’s front office hasn’t drafted or scouted well either. The current top prospect, shortstop J.P. Crawford, is in A-ball and unlikely to make an impact any time soon.

The upper minors offer little help beyond third baseman Maikel Franco, who is expected to be recalled from Triple-A Lehigh Valley in the coming days. Franco struggled in a cup of coffee with the Phils last September, but at just 22 he does offer a glimmer of hope. Franco has been joined in the Lehigh Valley lineup by former All Star Dom Brown. After slamming 27 home runs and posting a 124 OPS+ in 2013, Brown fell on hard times in 2014. The Phillies optioned Brown to Triple-A earlier this month rather than activate him from the disabled list. The fall of Brown and the current playing time devoted to the likes of Sizemore and Francoeur is a stark reminder of Amaro’s failings.