Incredibly, the Washington outfielder is still 22. 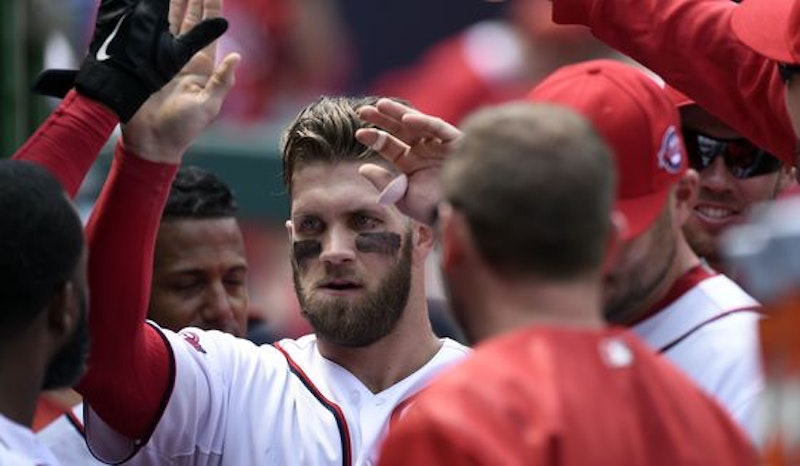 The Washington Nationals have disappointed in the opening month of the 2015 season. The pre-season NL East favorites, and chic World Series pick, have hovered around .500 all season thanks to a banged-up lineup and shaky bullpen. While the absence of Anthony Rendon has temporarily dampened the Nats’ hopes, the play of Bryce Harper promises brighter days ahead.

Harper’s been in the public eye for so long that it’s difficult to remember that he’s just 22. Harper has already logged three full big league seasons at an age when most players are getting their feet wet in Double-A. The legend of Harper’s amateur feats hit the Major Leagues long before he was ready to fulfill such promise, and now a healthy and more experienced Harper is wreaking havoc on the National League.

Harper homered in his three at bats in Wednesday’s afternoon game against the Marlins. In doing so he became the youngest player to hit three runs in a game since 1969. The homers raised Harper’s season total to eight, which puts him in fourth place in MLB for home runs. Harper’s power potential has long been discussed but until this season there were only flashes. After belting 22 homers as a 19-year-old Harper’s totals decreased to 20 in 2013 and just 13 last season. He did break out in October wearing out poor Giants’ reliever Hunter Strickland, slamming three home runs in just 17 postseason at-bats.

While the full arrival of Harper’s power swing was just a matter of time, he’s had a keen eye at the plate in his brief career. After posting respectable on base percentages in his first three seasons (.340, .368, .344) Harper has moved into the stratosphere of baseball’s elite hitters in 2015. Harper currently leads all of Major League Baseball with 26 walks in just 29 games and his .416 OBP is good for 10th in the National League. Harper walked just 38 times in 100 games last season.

While Harper’s talents may be old news, he’s still younger than new talents like the Dodgers’ Joc Pederson and the Cubs’ Anthony Rizzo and Kris Bryant. Harper’s been talked about for so long that some fans labeled him overrated. Now he’s probably underrated.

Harper is just one of the National League’s new young stars flashing the combination of power and patience. Rizzo has built upon his 32 home runs and .913 OPS in 2014. He currently leads the NL with a .474 OBP and ranks sixth in slugging. Pederson and Bryant, both 23, look like they’ll be locked in a season long race for National League Rookie of the Year honors. The impressive thing about both rookies is their grasp of the strike zone.

Pederson ranks just ahead of Harper with a .423 OBP. While Pederson’s on-base skills are remarkable for a rookie, Bryant’s .444 OBP is crazy. Pederson has already hit nine home runs for the Dodgers after belting more than 30 last season at Triple-A. The center fielder has made Dodger fans forget about Matt Kemp and quelled any concerns that his offensive prowess was fueled by the hitter-friendly Pacific Coast League. Bryant has gained the respect of National League pitchers after he ran roughshod over the Cactus League this spring. The third baseman has yet to homer for the Cubs after hitting 55 home runs in 181 minor league games but he’s already pitched around on a regular basis. Chicago manager Joe Maddon has tinkered with Bryant’s placement in the lineup in an effort to get the rookie some pitches to drive.