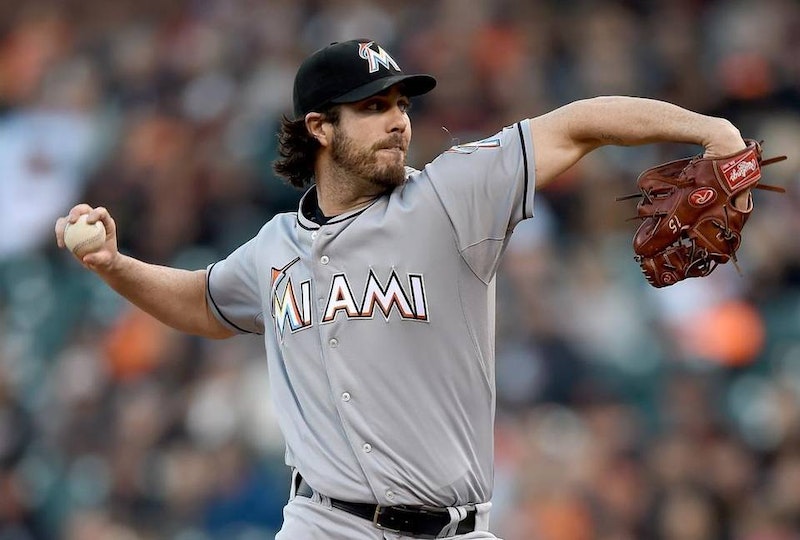 The 2015 season hasn’t been kind to the Miami Marlins. Ownership added insult to the team’s sluggish start last week when GM Dan Jennings was given the dual responsibility of also serving as the field manager. Jennings looks to be as overmatched as his squad. Giancarlo Stanton continues to send baseballs into the stratosphere but the rest of the lineup offers little protection or production. With Jose Fernandez still rehabbing from Tommy John surgery a new ace has stepped forward for Miami’s floundering fish.

The Marlins acquired Dan Haren and Dee Gordon in an offseason trade with the Dodgers. The new players have teamed with Stanton to provide the only bright spots for Miami. Gordon currently leads Major League Baseball with a .386 batting average and Haren has out-pitched the team’s more heralded offseason arrival, Mat Latos.

Haren’s performance isn’t as surprising as his mere presence on the roster. After signing a two-year $20 million deal with the Dodgers before the 2014 season, and posting respectable stats (13-11, 4.02 ERA), Haren was sent packing for the East Coast. The veteran balked at the trade and announced that he would rather retire than pitch for the Marlins.

After the Southern California native realized that no trade back to SoCal to pitch for the Padres or Angels was in the works he reluctantly reported to Miami’s Spring Training. Haren, still just 34, looks like he could pitch for a few more seasons. He’s currently leading the Miami staff with four wins, five quality starts, and a 1.01 WHIP. Haren’s on-field performance has far exceeded his peripherals. His current 4.44 FIP hasn’t manifested itself in a ballooning ERA thanks in part to the infield defense of Adeiny Hechavarria and Dee Gordon.

After initially refusing to pitch for Miami, Haren may soon get his wish by pitching himself out of South Florida. The veteran is set to become a free agent following the season and he’ll be an attractive trade target for contenders in search of pitching. Haren’s past success with the A’s and Angels is sure to interest American League clubs. The revamped Dodgers may even come calling. Brandon McCarthy, Haren’s rotation replacement in LA, will miss the rest of the season following Tommy John surgery.