The Orioles Aren't Likely To Be Lucky Again in 2013 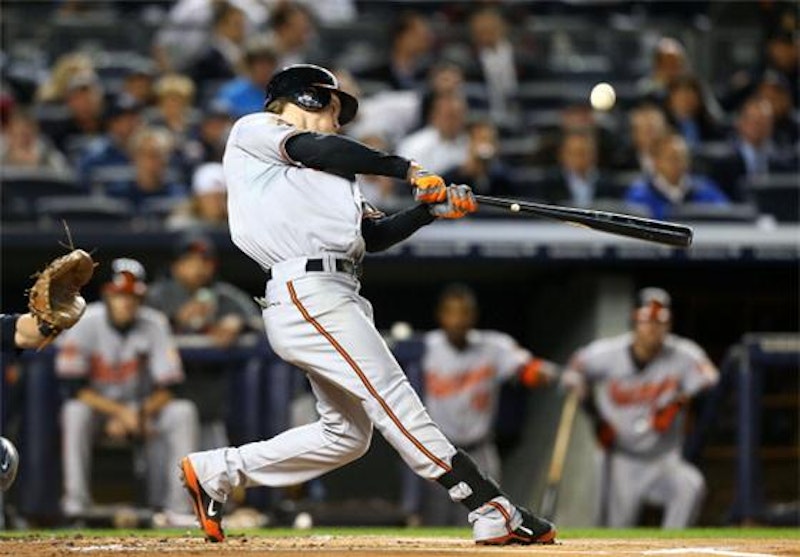 Baltimore Orioles GM Dan Duquette must be pretty cocky, because he hasn’t made a single move of note this offseason. The O’s, who miraculously made the playoffs last season, are not primed for a repeat. In fact, on paper, the team looks like the worst AL East team for 2013.

The offense is solid, especially if Adam Jones, Matt Wieters, and Chris Davis build on their successful 2012 campaigns. A full year of Manny Machado will help, and so will Nick Markakis and JJ Hardy, if they can stay healthy. Maybe Nate McLouth will repeat his late season surge, but it’s doubtful.

While Duquette’s been snoozing, the Blue Jays have added Melky Cabrera, Maicer Izturis, and the Miami Marlins to their roster. Jose Reyes leading off and Emilio Bonifacio in the nine-hole will definitely bother opposing pitchers. Brett Lawrie will undoubtedly improve on his mediocre sophomore season, but a full year of Jose Bautista will be their real ticket into the playoffs. The Jays’ pitching might be even better, especially with the recent R.A. Dickey trade (regardless of how steep a price they paid for him). Josh Johnson, Dickey, Brandon Morrow, Mark Buehrle, and Ricky Romero are a fiercer starting five than even Tampa Bay.

Speaking of Tampa Bay, they haven’t been slouching either. The recently acquired Wil Myers may very well be their next Evan Longoria. The Rays offense, too, is now better than Baltimore’s. And even though they surrendered James Shields in the Myers trade, Tampa Bay still has a top five rotation in the majors.

And then there’s the Red Sox and Yankees, the two spendthrifts who can buy any free agent on the market and are impossible to compete with because of their budgets. But both teams have scaled back. New York is lying low, kind of like Baltimore, except that they have enough reserves to skip out on three off seasons and still contend for the pennant. Boston is also being a bit silly, but in a different way. Their signings of Mike Napoli, Shane Victorino, and Ryan Dempster are so risky that they could either land the team with a Wild Card berth or a spot in last place again—unless the Birds are already there. Still, Jacoby Ellsbury is in a contract season, Dustin Pedroia is fully healthy, and Ryan Lavarnway is fighting for a starting spot on the roster. I’d take that lineup over Baltimore’s.

But that’s not even the worst part. Baltimore has almost no pitching. All of their hyped prospects haven’t panned out, and it looks like Dylan Bundy is still a year or so away from the Majors. After that, all that’s left is Wei-Yin Chen and Jason Hammel. Chen pitched decently last season, but I wouldn’t count on him and his 4.42 FIP as anything more than a fifth starter going forward. Hammel is a little different, as his 3.29 FIP shows, but I would take a wait-and-see approach with the righty, as he only pitched 118 innings in 2012.

Duquette could’ve gone out and signed Dan Haren to a big money, one-year deal, but he let the potential ace go to the Nationals. Brandon McCarthy would have been another boon to the rotation, but he signed with the Diamondbacks, for only $15.5 million over two years. Shaun Marcum is still on the market, but I doubt Duquette will have the sense to actually sign him.

Had the O’s added a couple quality starting pitchers and another bat, someone like Nick Swisher, they could’ve have pushed for repeat. Now, however, they look like they’ll fall back to losing. It’s still December, but so many of the quality players have already signed. The Orioles could trade to fill in their holes, but aside from Machado and Bundy, who are absolutely untouchable, their farm system is lame.

Maybe they’ll get lucky again, but I doubt it.