Keep the injured players on the sidelines. 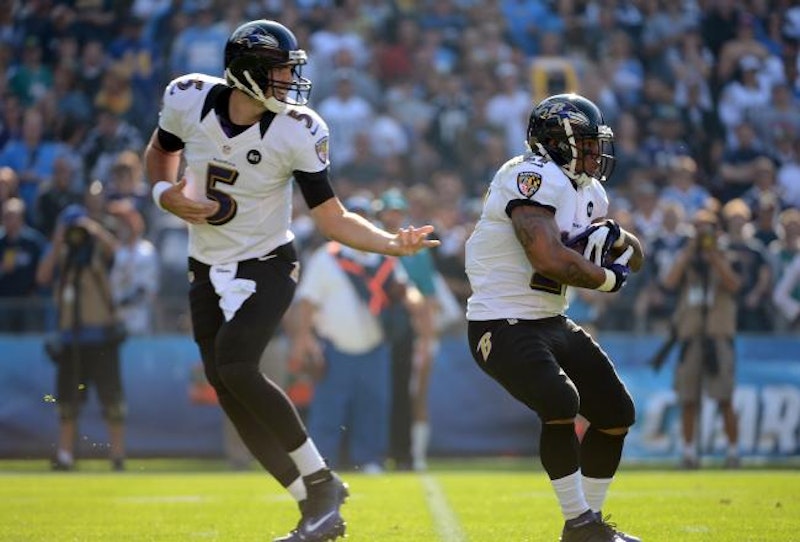 The Baltimore Ravens backed into the playoffs last Sunday when Pittsburgh’s Ben Roethlisberger tossed an overtime interception to set up the Cowboy’s game winning field goal.  Big Ben’s gaffe secured the Steelers’ seventh loss of the season and Baltimore’s fifth consecutive playoff appearance.  As Roethlisberger heaped blame upon offensive coordinator Todd Haley the Ravens and their fans were equally as cranky.

The Ravens are coming off an embarrassing 34-17 home loss at the hands of Peyton Manning and the Denver Broncos.  There’s no shame in losing to Manning, in fact the Ravens have made a habit of it over the years.  The new offense of Jim Caldwell looked an awful lot like the old offense of the recently fired Cam Cameron.  The Ravens started the game with three consecutive three-and-outs and Joe Flacco threw a goal line interception as the first half clock wound down which gave Denver a 17-0 lead and effectively ended the game.

The Ravens are 9-5 but they don’t look it.  Why?  Well, many of the players that helped secure those nine wins and one game lead in the AFC North watched Sunday’s game from the sidelines.  It may be in Baltimore’s best interests if those guys watched from the sidelines for the next two weeks as well. The defense is in tatters.  Starters Ray Lewis, Bernard Pollard, Lardarius Webb, Jameel McClain, and Dannell Ellerbe all missed Sunday’s game.  Terrell Suggs, Haloti Ngata, and Pernell McPhee have been playing through injuries for weeks.  Webb and McClain are out for the season but the others could return.  The Ravens’ best chance of making a postseason run has much more to do with getting its injured defenders back on the field than playing the Wild Card game at home.

Sure, winning the division and hanging a crisp white banner in your stadium is swell, but it’s not the ultimate goal. The Ravens convinced us of that. They publicly stated their championship expectations numerous times over the past few years.   The Ravens have been agonizingly close to a Super Bowl appearance two times in the past four seasons.

Simply getting to the playoffs is no longer a special occasion.  Postseason football has become a foregone conclusion here in the land of pleasant living.

Are we spoiled?  You bet.

The Ravens can go all out over the next two weeks and rush their injured players back to the field in an attempt to secure the division crown and a home game in the Wild Card round of the playoffs but a home playoff game that comes at the expense of additional or worsened injuries is fool’s gold.

The Ravens would be best served licking their wounds on defense over the final two weeks while trying to establish some type of offensive rhythm.  Wins over the Bengals and Giants would be nice but ultimately a healthy, or nearly healthy, team heading into Wild Card weekend is the only hope this Ravens team has of fulfilling their flickering Super Bowl dreams.