St. Louis and Cleveland Punted on the best Rookie QB. 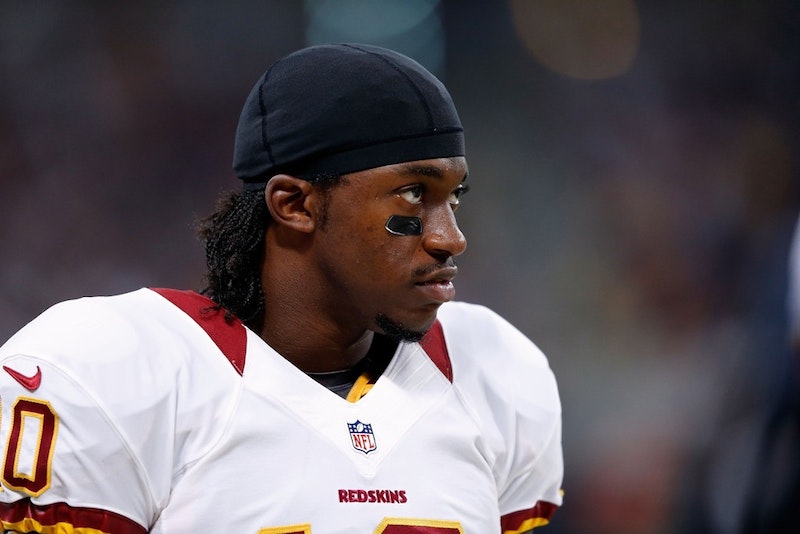 Robert Griffin, III has been dazzling at quarterback for the Washington Redskins. According to Football Outsiders DYAR stat, Griffin has been the third best quarterback in football through 14 weeks (13 games) this season. He also leads the league in passer rating, and yards per attempt. The Redskins lead the NFL in rushing yards, a cruder measure to be sure, but one that wouldn’t be possible without the threat of RG3 running on every play.

To move up four slots in last year’s draft and acquire Griffin, the Redskins sent three first round draft picks and a second rounder to St. Louis for the second overall pick. It was a massive haul for the Rams who already had spent a first round pick on a quarterback two seasons prior. However, the Redskins weren’t the only team trying to move up for the potential that was Griffin. The Cleveland Browns, Washington’s opponent this past week, were reportedly in the hunt as well.

It’s understandable the Browns didn’t want to meet the Redskins offered price, but that they didn’t sets up an interesting parallel between Washington, St. Louis, and Cleveland. In effect, both Cleveland and to a greater extent, St. Louis bet against RG3. Cleveland bet that the value they’d receive out of their first round picks this past season, next season, and the following season would be greater than Griffin. That’s a bet I would have taken but it’s not one that has started off well for the Browns. They spent the first of those picks on a 28-year-old quarterback, Brandon Weeden, who has looked mediocre in his rookie season.

By trading their pick to Washington, the Rams also bet against Griffin. They had burned the first overall pick on quarterback Sam Bradford two years prior so from that standpoint not spending the second overall pick on another quarterback made sense. Still, in trading the pick, they bet they’d extract more value out of three first round draft picks and Bradford than Griffin. Like the bet above, I’m not sure it’s a bad one. Taking the known quantity in Bradford and the additional two first round picks is certainly defensible and probably represents a smarter job of playing the percentages. And yet, like the Browns, the early returns aren’t as positive. Bradford’s play has been uneven, as he’s posted an 83 Quarterback Rating (Griffin’s is 104) in his third year. The Rams could use the talent infusion from the other two first round, and especially so considering the level of production they are getting out of Bradford, their most important player.

That the Rams chose the Redskins to trade with also means they thought the Redskins’ picks would hold more value. In other words they thought the Redskins would remain the worse of the two teams, thus increasing the value of the pick. This also depended on Griffin. If Griffin was a bust, or at least took a few years to develop, the value of the picks the Rams would receive would increase. But if Griffin became an instant Pro Bowl quarterback, the picks the Rams received from Washington would be far less valuable. So far Griffin has been a down-ballot MVP candidate. With each touchdown pass and each win, he hurts the team that could have picked him but opted not to.

While St. Louis and Cleveland bet against Griffin, Washington didn’t, and right now, they look like they might’ve been right. After winning five games in a row, a feat that would likely have been impossible without Griffin at the helm, the Redskins have moved to the front of the NFC East. That is something that hasn’t happened this late in the season since 1999. At least you can understand why St. Louis picked Washington, even if it isn’t working out like they probably planned.

The Redskins are in the unique position of being able to redefine the value of a trade that already happened. With each Griffin-led win, they’re making themselves look smarter, and St. Louis and Cleveland look dumber.