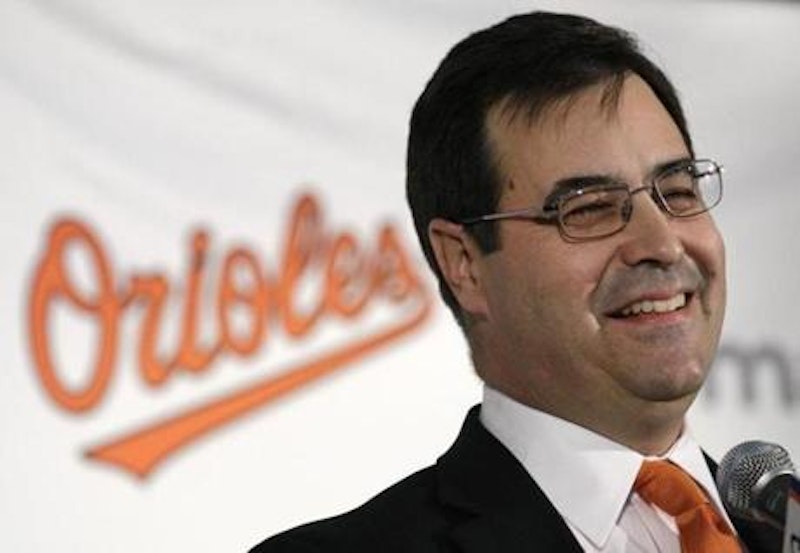 The Baltimore Orioles and AVP Dan Duquette have been roundly criticized for their lack of offseason activity.  The Orioles’ long-suffering fan base was hopeful that this winter would be different.  The good vibes were flowing with the team coming off a winning season and playoff appearance for the first time since 1997.  Baltimore’s visions of Josh Hamilton in orange and black were dashed last week.  Many O’s fans got that familiar sick feeling in their gut last week when Duquette publicly stated that the team could start the season with a Wilson Betemit/Danny Valencia platoon at DH.  Ugh.

Hope is not lost O’s fans.  Duquette created a good deal of equity for himself during last season’s postseason run.  I understand the discontent and hand-wringing but it’s time to trust Duquette and the process.  Here are the major assumptions I’ve drawn from the Orioles’ quiet offseason.

•     The Nationals’ deal with MASN is negatively impacting the Orioles’ budget.  The Washington Nationals are attempting to get a better TV deal (i.e.: more $$$) from Peter Angelos’ regional sports network.  Angelos struck a sweetheart deal with MLB when the Expos relocated to D.C.  The Nationals have watched the Rangers, Angels, and Dodgers sign massive, franchise-altering local TV deals over the past few years and want a little something extra in their stockings.  Angelos obviously wants to stick to the original terms of the relocation agreement.  If the Nationals successfully negotiate a larger annual rights fee with MASN then the network will in turn need to up its contribution to the O’s.  While that will essentially mean Angelos taking money from his right pocket and putting it into his left pocket the impact on both franchises could be profound.  I’m going to assume that Angelos has nixed the talk of long-term, high-dollar free agent pursuits until the MASN/Nats battle is resolved, if ever.

•    Don’t believe anything Duquette says publicly.  I see a lot of fans go crazy on Twitter and message boards every time Duquette makes a public statement regarding the team’s plans or pursuits.  Duquette is not stupid.  He’s not going to show his hand or negotiate in the press.  Chill out everyone.  When Duquette says he sees Danny Valencia as a right-handed DH option he’s largely blowing smoke.  The Orioles clearly want to add a righty swinging power hitter but Duquette lacks the flexibility to overpay in terms of dollars or prospects.


•    The lack of farm system depth is hurting the Orioles in both the trade and free agent markets.  Baltimore has some enticing young players.  Manny Machado, Dylan Bundy, and Kevin Gausman are three of the top prospects in baseball.  Jonathan Schoop could be playing second base for the Birds as soon as June.  The problem is that beyond those top four, Baltimore’s minor league system lacks quality depth.  The four prospects mentioned above aren’t going anywhere.  Machado and Schoop could both be regulars before the end of the season and Bundy and Gausman could be in the running for rotation spots this time next year.  Duquette no doubt hopes to cobble together a deal for a power hitter from a group of disappointing young pitchers including Brian Matusz, Jake Arrieta, and Zach Britton.  Rookie Steve Johnson had some huge games for the 2012 Orioles but his lack of a power fastball limits his potential trade value.  The Orioles have reportedly shown some interest in free agent first baseman Adam LaRoche but are wary about sacrificing the 24th pick in next June’s MLB amateur draft to sign the 33 year old.  Duquette needs all the picks he can get to continue to build the type of prospect inventory that allowed the Blue Jays to go on their shopping spree this winter.  Don’t expect the Orioles to put a package together to get Giancarlo Stanton; think Mike Morse, Josh Willingham, or Alfonso Soriano instead.

•    Expect a trade near or after the start of Spring Training.  Duquette has a surplus of starting pitchers.  While you can question the quality of the depth the fact is that Baltimore has nine pitchers for five rotation spots, not including Bundy, Gausman, or the rehabbing Tsuyoshi Wada.  The Orioles have repeatedly stated their interest in re-signing playoff hero Joe Saunders but the free agent deals handed out to the likes of Joe Blanton and Ryan Dempster may have priced the O’s out of Saunders’ market.  I’m going to assume that the O’s re-sign Saunders to a one-year deal near the start of spring training after the veteran fails to find the three year offer he seeks.  Bringing back Saunders will give Duquette the ability to trade from his pitching stockpile to obtain the power hitter he seeks.  Strong springs from Matusz, Arrieta, and Britton will only strengthen Duquette’s trading options.


•    The next big contract signed by the Orioles will be a Matt Wieters extension.  The Orioles have shown in the past that they don’t intend to chase big money free agents.  Don’t expect that to change any time soon.  Josh Hamilton and Zach Greinke were never coming to Baltimore.  The Orioles have also shown a willingness to sign promising players to long-term extensions (Nick Markakis, Adam Jones, Brian Roberts).  All Star catcher Matt Wieters will be next on the to-do list.  Wieters is represented by Scott Boras, which is always a complicating factor, and his offensive game is still evolving, but he could be amenable to an extension following the 2013 season if he sees himself as an integral part of a promising young ball club.  Jason Hammel is a free agent following the 2013 season and if he can stay healthy and replicate his 2012 success he’ll be in line for a huge free agent pay day.  I’m going to assume that the Orioles will be unwilling to match Hammel’s free agent price.  The club would be wise to offer him a mutually beneficial extension this winter.  If the O’s drop out of contention this summer, or if Bundy and or Gausman are ready ahead of schedule, Hammel may be the one dealt to obtain the power bat that Baltimore lacks.

•    Don’t blame Duquette for the budget.  No one other than Duquette and Angelos have any idea how much the Orioles can actually spend on payroll.  We’re all pretty sure that MASN is a cash cow and that the network is short changing both the O’s and Nats on rights fee but that isn’t Duquette’s fault.  The GM gets a budget from the owner and is charged with fielding a competitive club within those financial parameters.  Could the Orioles afford Josh Hamilton?  Probably.  The problem is that Duquette couldn’t afford him so instead he re-signed Nate McLouth and did a few Hail Marys on Nolan Reimold’s neck.  Duquette did a smash up job in cobbling together a playoff squad last season and clearly intends to do the same thing this season.  Dan Duquette hasn’t been given the financial resources to play with the big boys and will instead deal in the currency of promising, team-controlled starting pitching.  Baltimore fans should blame Angelos for the MASN/Nats battle and the Orioles’ unwillingness to chase free agents and trust Duquette’s judgment in the best way to allocate the resources that have been allotted to him.