Hobart for the Win

Division III darkhorse charmers could light it up. 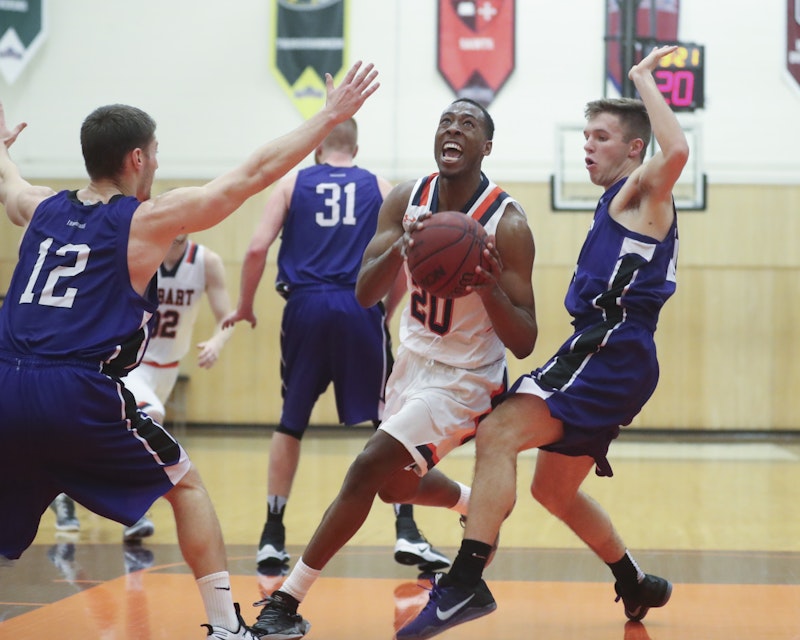 Some might’ve noticed New York City sports are currently languishing in a 16th-century limbo best captured by painter Hieronymus Bosch. Kristaps Porzingis of the Knicks lies dismembered in the foreground as the team languishes and is shredded by wolves in a public square. The New York Rangers are a baby stuck in a burning building on an island with a fiery moat keeping potential rescuers away. Their displaced NHL brethren on Long Island have been drowned in a trough of offal and the New Jersey Devils are burning at the stake nailed into the barren earth of present-day Newark.

To the north of that city of many murders, the bodies of the New York football Giants and New York Jets are hoist high and impaled on long spears anchored into a swamp filled with skeletal dying horses. The New York Red Bulls of Major League Soccer and their nomadic counterparts NYCFC have been blinded with white-hot blacksmith tongs and, hands cut off by a hooded executioner, wander into a quagmire populated by flesh-eating boars.

The New York Mets are being slowly carved up by butcher/accountants who’ve strapped them to a grandiose abattoir table in Queens. The New York Yankees, expected to win 158 games this season, are painfully bloated and lurched over a vomitorium trough in the Bronx. The New York Liberty WNBA squad’s been outfitted in hairshirts and are being marched single-file in leg-irons out of Madison Square Garden and into a leper-filled convent in Westchester.

So when sports are going south in the big city, sometimes you have to go north to find recompense. Enter: Division 3 NCAA basketball squad from Hobart College in Geneva, NY. They’ve won 14 straight as of this writing, wrapped up first place in the Liberty League, losing to only one conference foe when Union College upended the Statesmen in Schenectady back in early December. Hobart (20-3 overall, 15-1 Liberty League) has bootstrapped its way into the 25th spot on the D3 national rankings, even with its most innocent and non-committal nickname. The conference title means the Statesmen will be involved in the D3 version of March Madness, with the final rounds and championship set for March 16-17 in Salem, VA, (Babson took the trophy last year).

Hobart originated as the Deacons back in 1822 but an inside joke in The New York Times caused the athletic nickname to be transformed. In 1936, a Times writer referred to the Hobart team playing Amherst in a football game as “the statesmen from Geneva.” Somehow, such publicity swayed the school to defrock the Deacons nickname and opt henceforth as the Statesmen. Their logo is now a slightly demented grinning Quaker Oats guy in a tri-corner hat reminiscent as the drunken uncle of the Robert Morris University dude.

The current basketball version of the Statesmen trekked 240 miles east from the Hobart campus to take on Bard College in Annandale-on-Hudson, NY last weekend. When Bard made the trip to Geneva in early January, the Raptors were handed a 97-58 drubbing by Hobart. The Statesmen were suddenly targets thanks to their back-end 25th national ranking in the D3 polls. Bard played them tightly on the home court, came within a few points in the second half, but eventually succumbed 72-82 as Hobart eyes the postseason. The Statesmen roster is dotted with a bunch of 6-foot-2 guys all doing their jobs with a somewhat humble gusto. Junior guard Colin Dougherty shares floor general duties with freshman guard Dan Masino.

Early on against Bard the Statesmen crowded the passing lanes and were off and running on steals leading to immediate fast breaks. Bard worked hard for every lay-up they made (usually one out of three), but Masino still managed to get the ball to his rather ungraceful but effective forward Sam Allen, a 6-foot-7 sophomore out of Lewisburg, PA. Like most Liberty League contests, the longer possessions lead to various screw-ups and shot-clock panic. The second half seemed to have a foul on almost every possession. The vastly improved Bard team continued its dominant rebounding and shot-blocking against Hobart, but even when the visitors were on the ropes they calmly recovered and maintained their lead.

Hobart freshman guard Jack Lesure played with absolute reckless abandon at times, drawing the mellow ire of the spectating Bard student body which resembled the cast of The Paper Chase with plenty of bedhead and wool caps to go around. Hobart’s clean-cut Dougherty, averaging almost 17 points per game, finished with 16 and appeared not have broken a sweat. Jamal Lucas, a 6-foot-4 junior guard from New York City, led the Statesmen with 20 points. They had reserved swagger and confidence perhaps knowing their remaining two conference games at home against Vassar and Union could hand them a 22-win campaign.

The fact that Hobart opened its season this year with two straight wins over ranked opponents (St. John Fisher College and the University of Rochester) throws some weight behind a hunch bet the Statesmen will go far in the D3 tournament this March. Also aiding Hobart’s championship chances is a famous alum in the form of Eric Bloom, singer for Blue Oyster Cult. So, don’t fear the Reaper and pay attention to the D3 tournament this March because some quaint “Statesmen from Geneva” could cause some smoke on the water, and perhaps a fire in the sky.